In Nine Perfect Strangers, Nine people gather at the Tranquillum House Resort for a 10-day wellness retreat, run by a former businesswoman named Masha. While these strangers get to know each other and grapple with their own issues, they start to have questions about what exactly is going on at this retreat.

The one-paragraph version of this: Nine Perfect Strangers is about a group of people who go to attend a fancy but strange wellness resort where they each work on their personal issues. They later get trapped in a room at the order of the resort director, Masha, and learn that it's all part of her experimental treatment where she's been administering them micro-doses of LSD.

A group of people show up to a wellness resort (the Tranquillium House) for a 10-day retreat. It includes Frances (romance novelist), Lars (health-retreat junkie), Ben and Jessica (rich young couple), Carmel (divorced single mother and Tony (divorcee). Plus, there's the Marconi family, consisting of Napoleon (schoolteacher), his wife Heather and their daughter Zoe. Tranquillium House has weird, stringent rules. As the guests do activities like hikes, therapy and meditation, we learn more about why they're all there. The Marconis lost a child, Zach. Ben and Jessica won the lottery and it changed their relationship. Frances was scammed by a man pretending to date her. Carmel's ex-husband and daughter are off traveling with his new fiancee, and she's here to lose weight.

Meanwhile, Masha is the resort director, and Yao and Deliah are wellness consultants. They are surveilling the guests closely. On Day 5, Heather figures out that the smoothies they've been fed are drugged. Masha admits that they've been micro-dosing them with LSD (to help them open up), but tried out a larger dose today. The guests are upset, but are soon all too high to do anything about it. High and hallucinating, they have various revelations. Lars sees how his parent's unhappy marriage has made him afraid to marry his loving partner, Ray. Heather feels guilty about Zach's suicide because she gave him medication that causes depression. Carmel decides she loves her body as it is.

When they sober up, the guests realize they are locked in. As they try to find a way out, the staff discusses the situation. (Deliah realizes this is not going to end well and leaves, stealing Ben's Lamborghini on the way out.) This was supposed to be a teamwork exercise, but Masha decides she's trying something new. When Yao protests, she drugs him. Masha gives the guests a new game to play, but then starts thinking of her baby son who strangled himself (with a curtain cord) while she'd been distracted with work and died. She takes LSD and is soon clearly out of her mind. The guests hear and smell a fire outside and are freaking out until they realize it's just a recording. They door is now unlocked and outside there's just a small wastebasket with burnt stuff.

Now free, Masha (still high) asks them if they're pleased with their revelations and results. When Heather insults Masha, Masha attacks her, so Frances knocks her out. A cop shows up (he went to check it out after catching Deliah speeding in the stolen car) and they tell him what happened. Masha and Yao are arrested. Afterwards, the guests end up resolving the root issues they went to the resort for. Many years later, Masha is out of jail, has written a book and has a exclusive, secretive LSD-based (illegal) therapy program still going on. Frances and Tony marry.

A friend of mine wanted to read Nine Perfect Strangers by Liane Moriarty, so I offered to read it with her.

I read The Husband’s Secret by the same author a long time ago, but I hadn’t been particularly enthusiastic about it, so hadn’t been planning on revisiting Moriarty’s writing.

But Big Little Lies has been so huge and Nicole Kidman is planning an adaptation of Nine Perfect Strangers, so I figured as long as I would have someone to discuss it with anyway, I might as well give it a shot.

I had low expectations for this book. As I said in the beginning, I only read it because my friend was looking for a reading buddy. When I started it, I was sort of skimming the pages, trying to read it as quickly as possible so I could cross it off my list and get on to the rest of my to-do list.

But once the characters started crystalizing in my mind and a few lines made me think a little deeper than I was expecting, I found myself taking my time and letting the story roll around in my head.

The book is very simple in terms of the plot. These people show up to a 10-day wellness retreat, you get to know them, they participate in retreat activities and in the process there are a number of revelations about each of the characters. 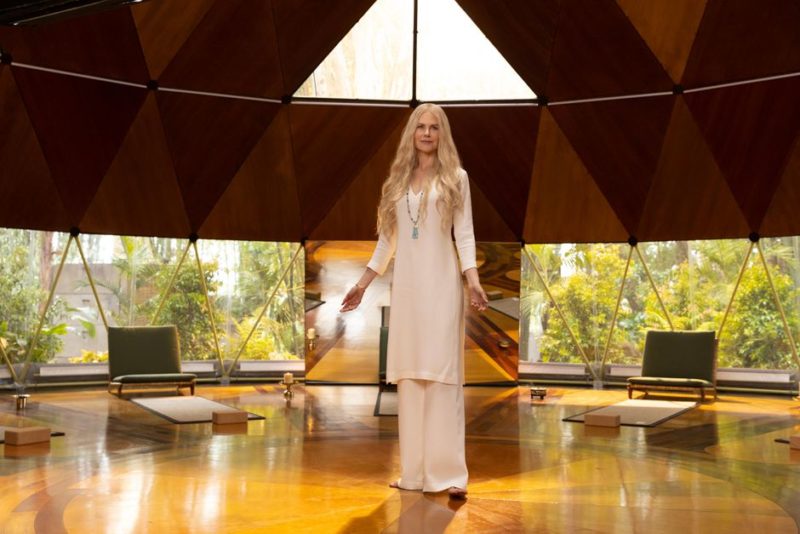 They’re a great cast of characters, and I was more interested in these characters’ journeys than I was expecting. In some ways, this is more like 5 or 6 individual stories that just happen to occur at the same place.

In this grouping of strangers, there’s a grieving family, a young couple trying to save their marriage and a health-resort junkie. Plus, there’s a handful of singletons dealing with things like regret over the past, shame or just trying to change their lives. Through their sprinkling of stories, Moriarty tells stories about self-acceptance, about forgiveness, about healing and about moving on and moving forward.

Liane Moriarty has a keen grasp of the nuances that lie in between the interactions people have with each other, and tries hard to pry at the less obvious emotions or gradations that color people’s emotions. Moriarty digs into their vulnerabilities and dredges out truths in ways that feels insightful and hopeful. From the loss of a child, to struggling with divorces and heartbreak, to overcoming their fears and insecurities, Nine Perfect Strangers tackles all these topics, often with a smart mix of gravity, levity and humor. 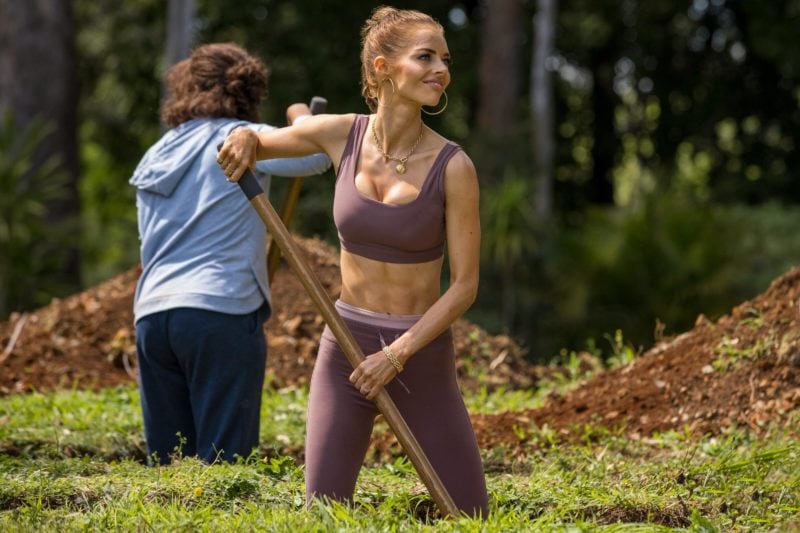 The last third of the book goes a little off the rails for a very long stretch. I won’t give away anything, but there’s a lengthy section where not very much is happening and to the extent that stuff is happening, it’s just kind of weird and not in interesting way. It also gets a little repetitive, hammering in points it previously made about the various characters.

When the “mystery” of what’s going is unraveled, it’s not a good mystery. I don’t know if I’d even consider it a mystery. It’s more like just something that doesn’t make a lot of sense so it’s mysterious in that sense. It’s mysteriously nonsensical.

I had such conflicted feelings during this book. There were parts that were so poignant and touching and incisive where my heart broke for these characters or I found myself smiling as I read this book. Then, there were parts where I thought this book was so stupid and insane that I couldn’t stop looking down to check how many pages were left.

There’s two main aspects that don’t work. First, the attempt to introduce an element of mystery and suspense into the premise is ham-fisted at best to put it nicely. (At worst, it’s a cynical ploy to generate more sales since mysteries and thrillers are popular right now.) It makes the book much “weirder” and didn’t add to the plot or meaning or substance. If anything, it detracted from the good parts of the book by making it hard to take it seriously.

Second, the attempt to bind these stories together and make it seem unified (e.g. the “team-building” exercise portion of the retreat) when they are really separate stories was not effective or interesting. I also don’t think it was necessary. The Love, Actually format of storytelling where a movie/book is telling separate stories that only intersect tangentially works just fine. Trying so hard to bring all the stories together isn’t needed and didn’t work.

Lastly, I’ll add that I think Liane writes much better female characters than male characters. Lars especially was a little unrealistic, both in terms of how he reacted to his parents divorce and what his character arc ends up being.

The other male characters were okay, but in general it seems (predictably) obvious that Moriarty has deeper insight into the intricacies of the female mind than that of their male counterparts. 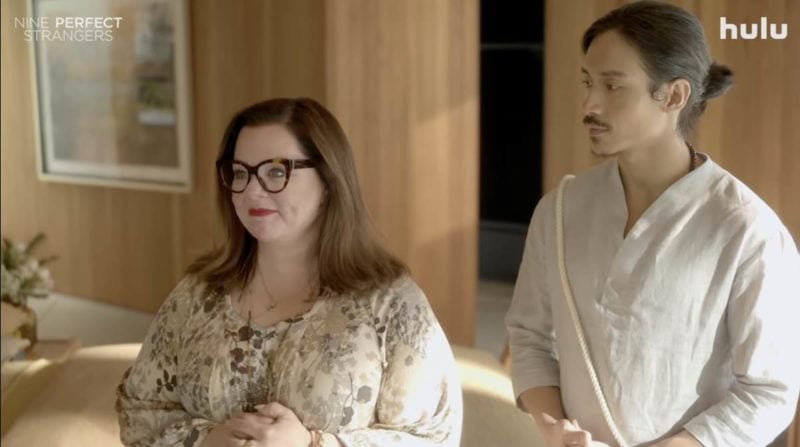 If you’re curious about the mystery element to this book’s synopsis, then skip this. Any “suspenseful” or “mysterious” elements to the plot are, well, going to be a huge letdown.

What this book does well, however, is tell six different stories about self-acceptance, about forgiveness, about healing and about moving on and moving forward and things like that. That is the reason to show up to this book, and I think for many people that will be enough, even with any flaws, for it to be worth their time.

It’s an un-cynical story that reminds all its readers that it’s okay to struggle sometimes, and it’s better to ask for and get help if you need it.

There were parts where I felt a little frustrated by the kookiness of the story (or perhaps the silly framework masquerading as a story), but I did feel genuinely moved at some parts. I was rooting for all these characters (well, maybe not Masha) and overall I got enough out of the book to feel like it wasn’t a wasted effort.

What do you think? Have you read this or are you planning on reading this? See Nine Perfect Strangers on Amazon. 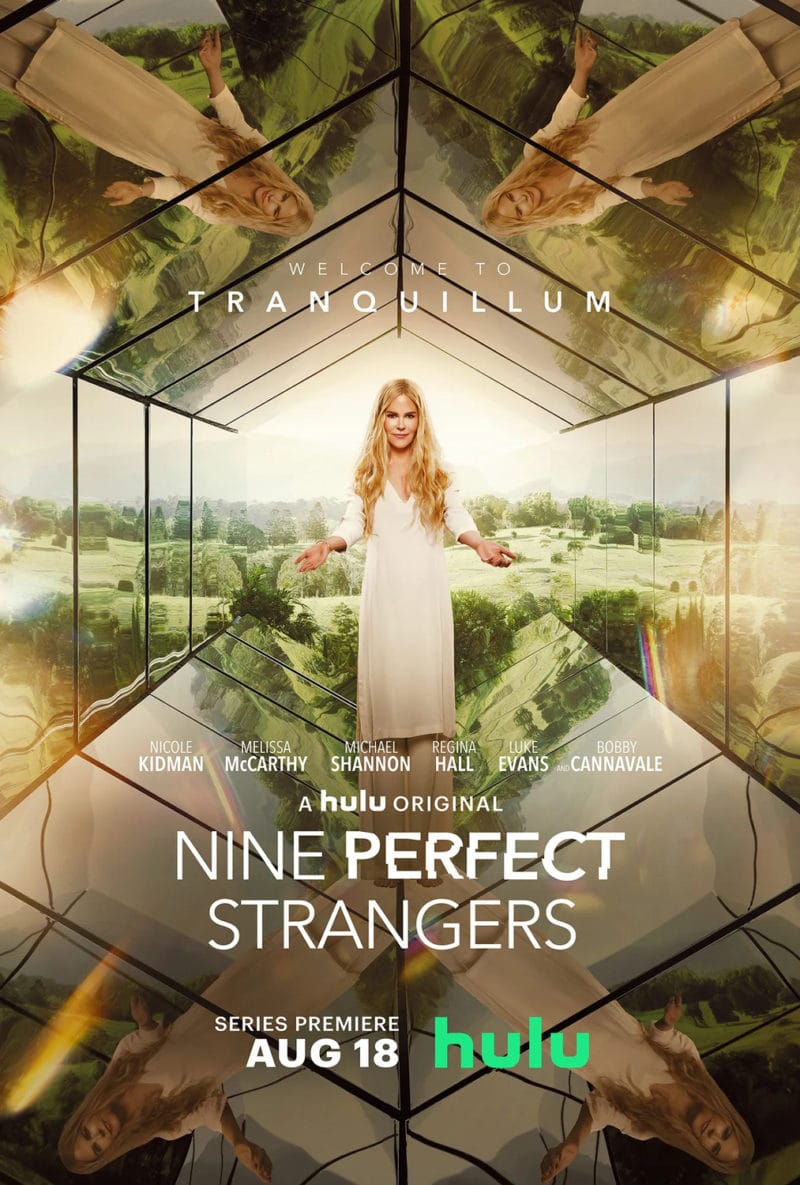 I listened to part of this on audiobook, but it wasn’t one of the better ones I’ve heard. I had a bit of a long drive so I stuck with it, so in that case it was better than not reading anything, but I wouldn’t recommend it.

The voice actress’s narration is just ok, maybe sometimes a little irritating. She voices most of the dialogue of the women in a high whiny voice that drove me a little nuts. The acting also leaves something to be desired as well, so some of the emotional parts of the book feel a little cringey.

See Everything We Know About the 'Nine Perfect Strangers' Adaptation 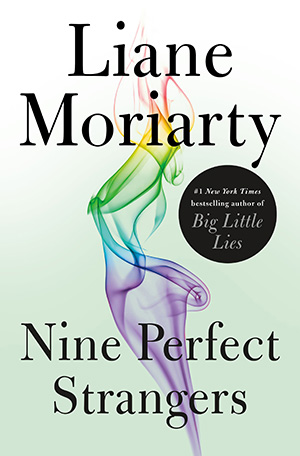 From the Publisher
Nine people gather at a remote health resort. Some are here to lose weight, some are here to get a reboot on life, some are here for reasons they can’t even admit to themselves. Amidst all of the luxury and pampering, the mindfulness and meditation, they know these ten days might involve some real work. But none of them could imagine just how challenging the next ten days are going to be. Frances Welty, the formerly best-selling romantic novelist, arrives at Tranquillum House nursing a bad back, a broken heart, and an exquisitely painful paper cut. She’s immediately intrigued by her fellow guests. Most of them don’t look to be in need of a health resort at all. But the person that intrigues her most is the strange and charismatic owner/director of Tranquillum House. Could this person really have the answers Frances didn’t even know she was seeking? Should Frances put aside her doubts and immerse herself in everything Tranquillum House has to offer – or should she run while she still can? It’s not long before every guest at Tranquillum House is asking exactly the same question.
Show More
Read an Excerpt
See it on Amazon Book Depository