Main / Books / Leave the World Behind

Book review and synopsis for Leave the World Behind by Rumaan Alam, a literary suspense novel about fear, race, and class.

In Leave the World Behind, a family of four heads out for a getaway at a remote but luxurious Airbnb when a couple shows up at their door, looking to stay.

Around them, things are going wrong. The tension rises as these two groups of strangers are forced together in an unfamiliar and increasingly alarming situation.

In Leave the World Behind, Amanda and Clay drive out to a remote luxury Airbnb in Long Island for a vacation, along with their kids Archie, 15, and Rose, 13. They are a middle-to-upper-middle class family who live and Brooklyn. It's an idyllic and peaceful vacation until an older black couple shows up at night, identifying themselves as the house's owners, G.H. (or George) and Ruth. They explain that there's been a blackout.

Amanda is initially suspicious of them and is surprised that they could own a home such as this one. But it turns out George and Ruth are a wealthy and highly educated couple. Their main home is in the Upper East Side of Manhattan, but they drove back to their vacation home to wait out the blackout. It's arranged that they will stay in the in-law unit in the basement until things get sorted. At the house, the wi-fi is out, along with the landline, TV and cell service. But they have power. Amanda also catches a news alert on her phone confirming a large-scale blackout across the east coast.

The next morning, Rose notices a herd of a few dozen deer outside (what she doesn't see is that there are actually thousands of them). Clay heads to town to assess the situation, but gets lost. He runs into a scared woman, but she only speaks Spanish and so he leaves her. Meanwhile, Rose and Archie go exploring in the woods. They find a shack and a house in a clearing, and Archie gets bitten by a tick. Then, a thunderous noise is heard, loud enough to crack the glass on some doors, which scares everyone. (Unknown to them, not too far away, the deer are scared and trampling everything in their wake.) Clay eventually finds his way home, but doesn't mention getting lost or the woman.

The adults try to prepare for an extended blackout, filling a tub with water in case the water stops running and checking on the food stores. But soon, Archie is sick with a fever. Amanda and Clay decide they need to leave to get him to a doctor the next morning. That night, a flock of wild flamingos appear on the lawn. Then, a few more loud noises sound out, breaking more glass and scaring them all. Amanda starts to think it would be better to stay here, where they have power, food and water, but in the morning a number of Archie's teeth have fallen out. They all also notice that Rose is missing.

Alarmed, Clay and George plan to drive immediately to a nearby hospital with Archie. Amanda will stay behind with Ruth to look for Rose. On the way, Clay finally admits to getting lost the day before, and he says that he did see a woman, but left her despite knowing she needed help.

George decides to make a stop to talk to Danny, his contractor, who he thinks can help them. However, Danny views George as merely someone he's done some work for in the past (as opposed to a friend) and greets them stiffly. He tells them what he knows, he says that there's a mass migration of deer going on which is a bad sign, and he advises that they go home and hunker down. George, Archie and Clay decide to just head back to the house.

Elsewhere, states of emergency have been declared, and the U.S. President is stowed away in a bunker. The world is falling apart. Levees have broken, resulting in floods. Some people worry about food. In the woods, Rose has made her way to the house she'd located the day before. The occupants are not home (they are stuck in San Diego and will never see their home again). She makes note of the useful things, grabs various supplies and heads back to inform the others of her findings.

Leave the World Behind by Rumaan Alam has been a pretty buzzy book this year, helped along by reports of it being soon to be adapted into a Netflix movie starring Julia Roberts and Denzel Washington.

It’s a tense story about a family on vacation and the arrival of some strangers. Leave the World Behind is probably best enjoyed without knowing too much about the plot developments, so I won’t give very much away, but what proceeds is a sharply-told and suspenseful story.

I’ve written up a much less detailed synopsis (above) than what’s printed on the back cover, and I would actually not recommend reading the book’s cover blurb since I’m of the opinion it gives too much away. This story is very scant on plot to begin with, focusing more on the thoughts and interactions between the characters.

I hemmed and hawed over this review, trying to decide what I really felt about the book; it’s one where opinions are likely to be split.

Leave the World Behind offers some interesting jump-off points for discussion and things to mull over. The book goes into the characters thoughts in a way that highlight their class differences, privilege and contrasting thought process. It juxtaposes the familiar domesticity of the characters’ actions against the jarring events around them, in a way that will feel familiar to everyone that is currently living through this pandemic.

It also offers an atmosphere of suspense that is well-done and manages to keep the tension held taut throughout the story. You can almost hear a Shepherd tone sounding wordlessly throughout the novel.

At the same time, I was left feeling mildly underwhelmed by Leave the World Behind. In general, the prose is often quite smart, but other times it felt like it was trying too hard to sound poignant without the substance to back it up.

For example, when the characters hear a loud noise, the book goes on and on for two pages about how momentous this noise is and waxing on about the nature of noise, which results in a lot of prattle like “Noise was an insufficient noun, or maybe noise was always impossible to describe in words. What was music but noise; could words get at Beethoven?” It’s a lot of time spent describing a sentiment that has the intellectual heft of “a picture is worth a thousand words.”

And as far as plot explanations go, there’s a sparseness to Leave the World Behind which some will find refreshing and others may find unsatisfying. Ultimately, the details of what is going on is not really the point of the book. That said, it did feel a little like a “cheat” to me that the book offers seemingly compelling details without putting in the effort of actually explaining anything.

You know how there’s always those arthouse films with like no soundtrack where critics all say that it’s like, “a powerhouse” or “tour de force” or “a masterclass in artistry”, but then half the audience is like “it was boring”? This book is kind of like that.

There is clearly an audience for it, and there’s definitely real substance here. I also think there’s a lot of good fodder for discussion, especially in the current state of the world, both in terms of living through a pandemic and in a time of rising income inequality. I also wasn’t bored, exactly, by it, since I think Alam does a great job of building and sustaining a suspenseful atmosphere in the book.

But I just didn’t think it was all that insightful. I’m not sure I personally got much out of the experience of reading it. I suspect I would have enjoyed it more as a group read. In fact, if you want to read it, I would highly recommend finding a friend to read it with, especially as a vehicle to talk about some of your thoughts about the pandemic, class disparities or, to a lesser extent, race. (Plus, I’ve written up some discussion questions below. Happy reading!)

Read the first pages of Leave the World Behind

See Everything We Know About the 'Leave the World Behind' Adaptation 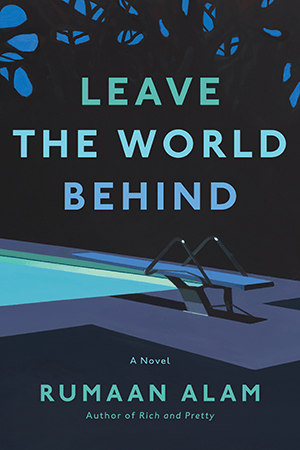 In Leave the World Behind, two families, strangers to each other, are forced together on a long weekend gone terribly wrong.

Amanda and Clay head out to a remote corner of Long Island expecting a vacation: a quiet reprieve from life in New York City, quality time with their teenage son and daughter, and a taste of the good life in the luxurious home they’ve rented for the week. But a late-night knock on the door breaks the spell. Ruth and G. H. are an older couple—it’s their house, and they’ve arrived in a panic. They bring the news that a sudden blackout has swept the city. But in this rural area—with the TV and internet now down, and no cell phone service—it’s hard to know what to believe.

Should Amanda and Clay trust this couple—and vice versa? What happened back in New York? Is the vacation home, isolated from civilization, a truly safe place for their families? And are they safe from one other?