By Taylor Jenkins Reid, a fun and breezy story of sex, drugs and rock 'n roll

Daisy Jones & the Six is the latest release from Taylor Jenkins Reid (of The Seven Husbands of Evelyn Hugo fame) and it’s all about sex, drugs and rock ‘n roll. It tells the story of the rise and fall of a fictional 70’s rock band through an “oral history” (think VH1’s Behind the Scenes).

It’s also the March selection from Reese’s Book Club. Overall, I think Reese’s selections are pretty good. There’s definitely a hard slant towards more plot-focused books that will work well as movie or TV adaptations — probably because her book club serves as a feeder for her production company — but, clearly there’s an audience for those titles, as evidenced by the popularity of this book. This one in particular is being adapted into a 13-episode series on Amazon.

Daisy Jones is young, beautiful, talented and just beginning her ascent into music stardom when a producer pairs her up with The Six, an up-and-coming blues-rock band.

Daisy Jones & the Six tells their story in all its unruly, sex-crazed, drug-fueled glory. Daisy is blessed in every way — looks, money, talent — but is also wild, reckless and filled with hubris.

Meanwhile, Billy, the de facto leader of The Six, is capable but controlling and struggling to manage the temptations of the rock and roll lifestyle. When they meet, stars align and legends are born. 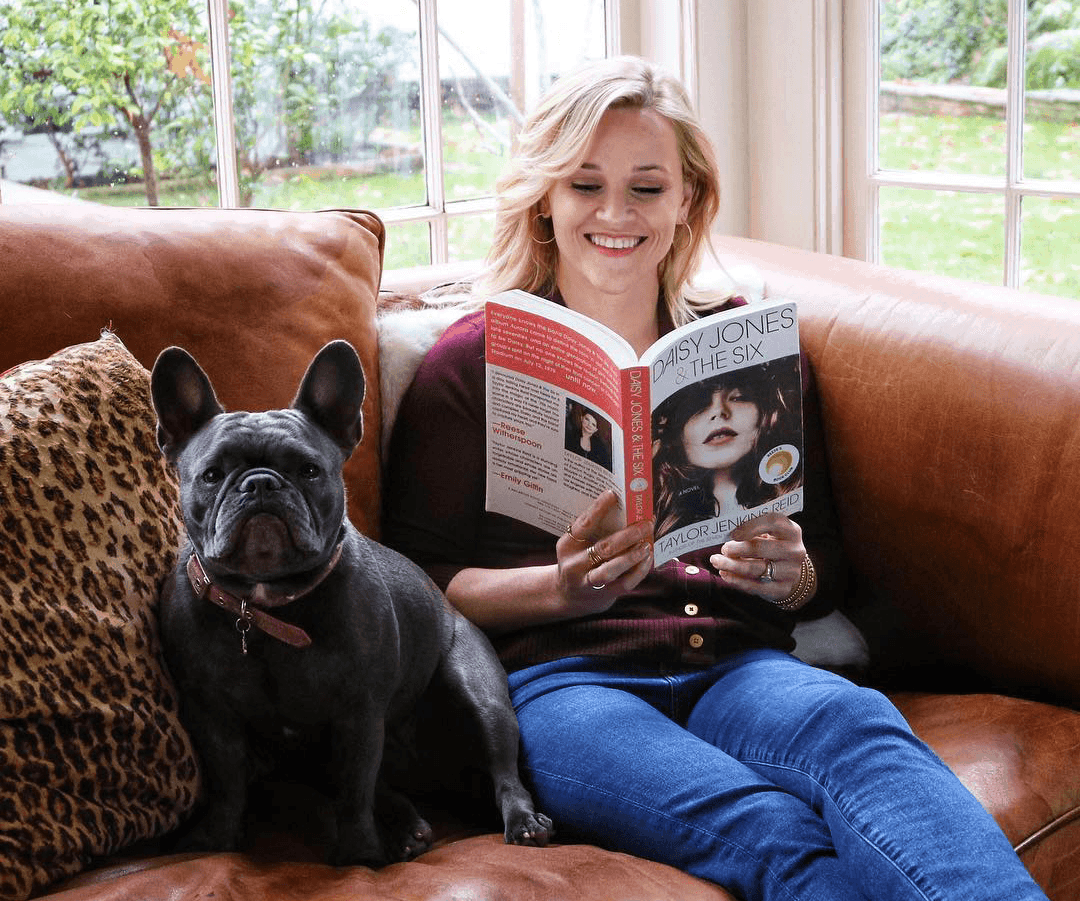 The 13-series Amazon adaptation is currently categorized as being in development (as of June 2019), which means it’s still early on in the process.

The film option was acquired by Reese Witherspoon’s Hello Sunshine production company back in August of 2018. The book is being adapted by writing partners Michael H. Weber and Scott Neustadter. They also wrote the screenplays for movies such as The Spectacular Now, The Fault in Our Stars and 500 Days of Summer.

For all the details, see Everything We Know About the Daisy Jones & the Six Series Adaptation.

More than anything else, Daisy Jones & the Six is a fun book that evokes the sense of energy that comes with telling a surprisingly uncynical story about uninhibited, young and talented people — it’s entertainment through and through. Upbeat and uncomplicated.

Even from the description on the back cover, you know exactly where this story is going, a bunch of beautiful and blessed people, off to make music, live glamorously and find fame. And it delivers.

In terms of the format, the “oral history”-slash-faux-documentary style works. It provides a breezy and quick way to tell the story from a multiple of angles, though it obviously limits to some extent the more reflective aspects of storytelling. Instead, the onus is on the reader to read between the lines of what’s being said.

I’m usually pretty adverse to literary gimmicks, but I think this format made sense for the type of story Reid is trying to tell. It’s also to her credit that she does a good job of capturing the right tone for the faux documentary format. It comes off as conversational, accessible and believable enough not to be be a distraction.

I would say that the people who would probably not enjoy this book are the one who are looking for something that delves a bit deeper into the issues it covers or those who are looking for something more contemplative. As mentioned above, I think this is partially a limitation of the format, but I also just don’t think that’s the type of book this is trying to be. This is a book that just wants to have a good time.

In general, it presents an overly rosy view of substance addiction and the road to fame. Neither of these things are particularly difficult battles for any of the characters, and to the extent there are consequences, they are very limited. (The lack of consequences for heavy drug use in this book is especially strange to me; I don’t understand why Reid would choose to write it that way.)

The larger gripe I had with this book had to do with portrayal of female characters, though I realize this may be an unpopular opinion.

Not-Quite-Feminism in Daisy Jones & the Six

In Daisy Jones, the main female characters (Camila, Karen and Daisy) are all clearly meant to be “strong women” — and they all have the same conception of what it means. To put it in Reid’s words, they’re all very “Take me or leave me”. They are all very assertive, don’t take shit, and they put their foot down when they see fit. And while I of course support having female characters who stand up for themselves, something about their characterization occasionally grated at me.

While well-intentioned, Reid’s idea of what a “strong woman” is comes off as too limiting to me. They all sort of just firmly say no if there’s something they don’t like, and for some reason they pretty much always get their way. This seems like a gross oversimplification of what it takes for women to navigate the world.

For example, when their label exec wants Karen to dress more provocatively, the entire situation is covered in one sentence: “Rod told me to wear low-cut shirts and I said,’Dream on,’ and that was about the end of that.”

Similarly, when Karen is being underutilized by the otherwise all-male band, her trials and tribulations are covered as follows: “Karen was the kind of person who had more talent in her finger than most people have in their whole body and The Six was under-utilizing her. She fixed that, though. She fixed that on the next one.” That’s literally all it says.

And when Daisy wants to write songs, despite Billy having always had all the control, she stakes her claim by just stating her intention, and he’s fine with it. “She was laying down the law early,” Reid writes.

What bothers me about this is that it also promotes the idea that sexism would be solved if women just spoke up once in a while (similar to why Sheryl Sandberg’s Lean In philosophy is often criticized). It additionally makes it seem like there’s only one way be a strong woman and that the burden is on women to shape themselves into this ideal “strong woman” figure, which I find problematic. To me, it’s a version of Feminism-Lite — at first glance it seems empowering, but ultimately it’s very hollow version of feminism.

Reid also embraces the idea that Daisy Jones’s willingness to have an album cover of her with her chest visible through her shirt (where you can’t even see her face) is some type of show of strength, which I though was a cop-out.

Let’s face it, most young singers that bare their tits to get sales are being exploited. Telling us “oh no, it’s okay, she was really into it” is just dodging the issue. And it’s easier for a character to feel okay with being exploited when it brings them fame, what about when they agree to things like that and it doesn’t? This book sidesteps all the messiness and hard issues.

(I’m guessing someone out there is gearing up angry comments for me, so I beg you to please be gentle, but I’d welcome contrary opinions in the comments!)

It’s also worth noting a lot of people are saying this book is great on audiobook. I haven’t heard it, so I can’t vouch for this but it would make sense given the format. I know that it does use different people to voice the different characters though, which is probably a plus. Check it out on audible.

If you’re looking for something fun, spirited and entertaining, go for it. Even with my criticisms, I have to admit that the book succeeds at what it’s trying to be. It dons a pair of rose-colored glasses and captures the energy and tone of that period in a faux documentary style that is entertaining and engaging. If you read it uncritically, it would be easy to enjoy as a quick beach read.

Ultimately, there are plenty of people who will like reading this book. As someone who spends my free time learning to code and writing about literary fiction, you can probably guess I’ve never been someone who finds the whole sex, drugs, and rock ‘n roll ethos particularly entrancing, but that’s me.

I had a hard time with the lack of substance in this book. Everything comes so easy for everyone in it, and the characters rarely face consequences for their actions. (And yes, I realize what a boring stick-in-the-mud I sound like right now, haha.) And what passes for feminism here bothered me.

When it comes down to it, I think I was disappointed by the lack of daring and how “safe” this book about rock and roll — once considered a wild and subversive lifestyle — turned out to be.

What did you think? Am I being too harsh? Do you think you’d consider reading this book? Share your thoughts below and happy reading! See it on Amazon.

P.S. See other Best Book Club picks of 2019 or listen to my discussion of this book on the Most Read Books podcast, Ep. 1 The Silent Crawdads & the Six. 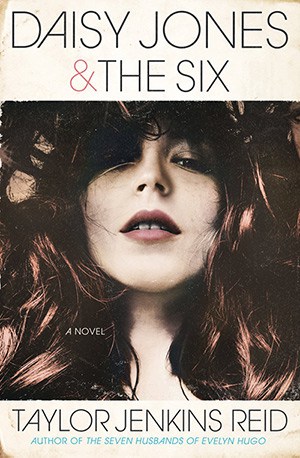 From the Publisher
Daisy is a girl coming of age in L.A. in the late sixties, sneaking into clubs on the Sunset Strip, sleeping with rock stars, and dreaming of singing at the Whisky a Go Go. The sex and drugs are thrilling, but it’s the rock ’n’ roll she loves most. By the time she’s twenty, her voice is getting noticed, and she has the kind of heedless beauty that makes people do crazy things. Also getting noticed is The Six, a band led by the brooding Billy Dunne. On the eve of their first tour, his girlfriend Camila finds out she’s pregnant, and with the pressure of impending fatherhood and fame, Billy goes a little wild on the road. Daisy and Billy cross paths when a producer realizes that the key to supercharged success is to put the two together. What happens next will become the stuff of legend.
Read an Excerpt
See it on Amazon Book Depository