Children of Blood and Bone

In Children of Blood and Bone, Zelie is a diviner, a maji child. The maji are clans of people who once had magic powers that have since disappeared from the kingdom of Orisha. In one brutal night many years ago, the maji were all eradicated from Orisha by King Saran who fears their powers.

An encounter with Amari, princess of Orisha, leads to the one opportunity to reawaken magic in these lands. Zelie and Amari must embark on a treacherous journey to restore those powers.

Orisha is a kingdom with two groups of people, the maji and the kosidan. The maji once had powers (ten clans, each with one power), but one day their powers disappeared. That night, there was a raid and all the maji were killed by King Saran, leaving only the children (diviners). The diviners have no power until they transform into maji, but now that the magic has disappeared no one does.

Zelie is a diviner who has a chance encounter with Princess Amari, the daughter of King Saran, who has stolen a scroll with the power to reawaken magic. (Amari stole it after seeing her father murder her diviner friend and loyal servant Binta). Zelie and Amari take the scroll to Zelie's teacher, Mama Agba, who reveals that she is a maji Seer. She tells them they are meant to find a legendary temple (Chândomblé) where all the maji's powers can be fully reawakened. Meanwhile, Zelie and Amaeri are being chased by the palace guards, led by Amari's brother, Crown Prince Inan.

With Inan and the guards in pursuit, Zelie, Amari and Tzain (Zelie's brother) travel to Chandomble with the scroll artifact. There, a priest (Lekan) has another artifact (a dagger) and tells them they need to find the third, a sunstone. They need to bring them to a sacred island and perform a sacred ritual on the upcoming centennial in order to re-forge the connection with their god, the Sky Mother. Otherwise, magic in Orisha will be gone forever. Lekan uses his magic to activate Zelie's Reaper (power over the dead) abilities, but is then killed by Inan's guards. The three get away and manage to track down the sunstone, which is being offered up as a prize. They fight a difficult naval battle and win it.

Meanwhile, Inan has discovered he too has some magic in him. He is a Connector, which deals in magic of the mind. However, when Kaea (his father's most trusted second-in-command) finds out his secret and threatens to reveal it, Inan loses control of his magic and kills her. Inan is able to use his power to connect with Zelie and track her down. Inan finds them, but when Zelie touches him, he sees her memories. It makes him reexamine his beliefs about the maji and magic, though Tzain and Amari are skeptical. Meanwhile, Tzain and Amari are abducted by masked men, but they turn out to be part of a secluded diviner settlement. When the dust settles, the diviners agree to help.

As Inan and Zelie begin to fall for each other, the royal guards attack the settlement, and Zelie is taken and tortured. Tzain and Amari recruit other diviners to rescue Zelie just as Inan tries to rescue Zelie as well. Tzain, Amari and Zelie escape, with Inan staying behind. They recruit a group of mercenaries led by a pickpocket named Roen to help them reach the sacred island. Fleets of royal warships head there as well. The three make it to the island, but Inan's belief in the cause starts to waver under the influence of King Saran.

As Zelie goes to perform the ritual, Inan and Saran reveal that they've kidnapped her father. She gives up the artifacts, but the guards attack anyway and Zelie's father is killed. Zelie then uses blood magic to strike back successfully, but Inan uses his own magic and goads Zelie into destroying the scroll artifact (which can only be destroyed by magic). However, when Saran sees Inan is a maji (and pieces together that Inan killed Kaea), Saran kills Inan. Amari, in turn, kills Saran. Still, despite the scroll being destroyed, Zelie is able to call upon the blood and spirits of her ancestors to forge a new connection with the Sky Mother. Zelie is killed in the process, but is resurrected by the gods. Magic is restored, and the book ends with Zelie seeing that Amari now has some magic in her as well.

So, I’m finally crossing Children of Blood and Bone by Tomi Adeyemi off my to-read list! I’ve been meaning to get to this title ever since it came out since it seemed like it was the type of book I’d enjoy, but it kept getting preempted by other new releases.

I finally found some time for it over the holidays though, but now of course I still need to read the second book, Children of Virtue and Vengeance, in this trilogy.

At its core, Blood and Bone is a fantasy novel of the action and adventure variety, dropped into a vivid and imaginative world.

A group of teens are on a quest to resurrect magic within the kingdom of Orisha. They must travel the world and collect artifacts, all while fending off the royal guards. It’s filled with unique locales, colorful characters, loyal allies and bitter foes. There’s plenty of battles and a hearty dose of (adolescent) romance as well.

It’s unmistakably a diligently plotted out novel with a clear vision. When I first started the book, I thought it was shaping up to be a book that suffers from some criticisms that are generally YA stereotypes, like two-dimensional characters, silly romances or predictable plot progressions. And while there is a little of that stuff, it also ended up having enough of the unexpected in store that it I was pleasantly surprised by it.

It’s also a story that deals in themes about prejudice, the dangers of power and abuse of power, and discrimination. However, I wouldn’t describe this as a particularly deep dive into these topics — they play a large role, but the book doesn’t really fully explore the nuances of these things in any notable sort of way. Still, I’m interested to see what Adeyemi does with her setup in the next two books of the trilogy.

It’s an easy read, not because it’s simplistic, but because it’s interesting, fun and adventurous and easy to get lost in the story. It’s one where I started reading and then looked up to realize it was now dark out and I’d managed to skip dinner. Oops. (I ended up ordering a pizza, thanks for asking.) 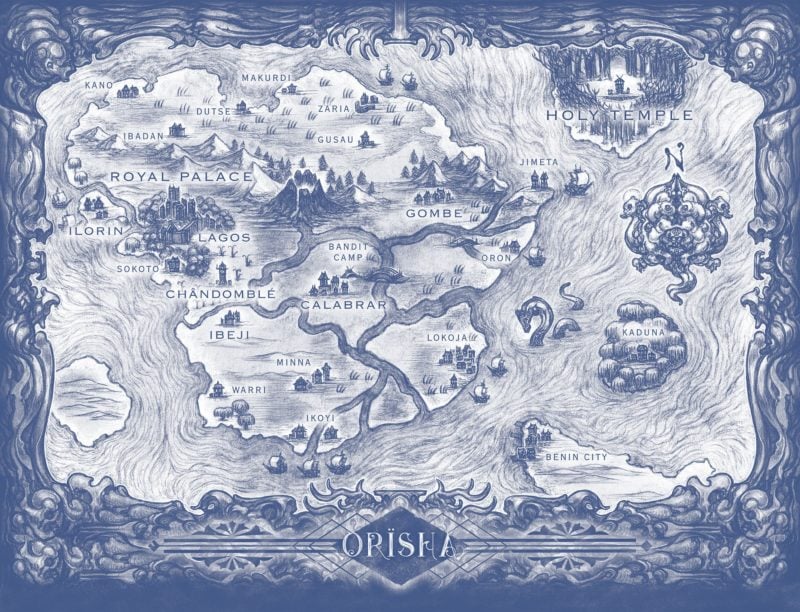 There are some things that gave me pause that I’m hesitant to mention, only because I don’t know if they will be fleshed out more fully later on. The rules around the use of magic and the backstory about the realm I felt were both areas that needed more definition and a fuller exploration. However, since this is a trilogy, I don’t know if Adeyemi is simply holding some cards close to her chest to be revealed later on.

As for stuff I wasn’t a huge fan of, trilogy or not, the plot of Blood and Bone includes a handful of too-convenient plot contrivances in order to make the story fit together. For example, it just happens that the centennial is coming up, or that a priceless, irreplaceable stone is being given away as part of a competition for some reason. Most of it is pretty minor stuff though, not a deal-breaker in my opinion.

My main gripe with Children of Blood and Bone though is that it’s yet another “chosen child”-type story. Like Harry Potter and Lyra Belacqua (from His Dark Materials), Zelie in Children of Blood and Bone is a “chosen child,” a child who is chosen by fate or the powers-that-be to be special and save everyone else. It’s a well worn, but very successful trope. And while I enjoy all these stories, it’s not my favorite trope simply because I don’t find fate to be a very inspirational concept. I prefer stories that focus on the choices we make and personal agency. But anyway.

Finally, it has to be said that at the end of Chapter 3, Children of Blood and Bone contains the ever-so-cliched phrase “the breath I did not realize I was holding”, a set of words for which some variant thereof appears in books constantly. There’s also another rendition of the same phrase later on in the novel as well. It’s a pedantic criticism, but I’m honestly surprised people are still using this phrase all the time.

For all the details, see Everything We Know about the Children of Blood and Bone Movie Adaptation.

I’d also recommend this book to anyone who likes a little more action and adventure in their books. There’s lots of sword swinging and faraway lands to explore. I’d also mention that while this book is generally categorized as YA fiction and it does contain some YA-type themes and characteristics, I think non-YA fantasy readers would enjoy it as well.

I’ve already bought the sequel, so yes I plan on reading the follow-up. Also, if you liked this book, I’d recommend checking out Katherine Arden’s fantastic Winternight trilogy, starting with The Bear and the Nightingale.

See the Children of Blood and Bone on Amazon.

Read the first pages of Children of Blood and Bone 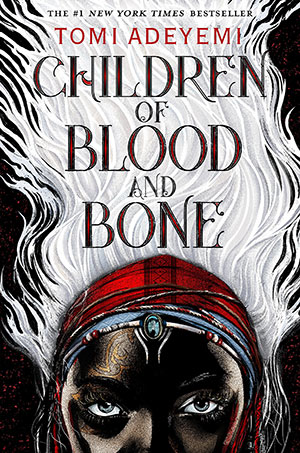 From the Publisher
Zélie Adebola remembers when the soil of Orïsha hummed with magic. Burners ignited flames, Tiders beckoned waves, and Zélie’s Reaper mother summoned forth souls. But everything changed the night magic disappeared. Under the orders of a ruthless king, maji were killed, leaving Zélie without a mother and her people without hope. Now Zélie has one chance to bring back magic and strike against the monarchy. With the help of a rogue princess, Zélie must outwit and outrun the crown prince, who is hell-bent on eradicating magic for good. Danger lurks in Orïsha, where snow leoponaires prowl and vengeful spirits wait in the waters. Yet the greatest danger may be Zélie herself as she struggles to control her powers and her growing feelings for an enemy.
Show More
Read an Excerpt
See it on Amazon Book Depository