Book review and synopsis for All Adults Here by Emma Straub, A lighthearted beach read about inclusivity and acceptance.

All Adults Here is about all generations of the Strick family, focusing on the stories of the various family members. At its center, is the matriarch of the family, Astrid Strick, who sees a woman she's known for a long time get hit by a bus. Astrid decides that it's time to come out as a bisexual to her family and tell them about her romantic relationship with her hairdresser, Birdie.

In this lighthearted and well-meaning story, the Strick family each has secrets and personal challenges they need to face.

In, Clapham, a small town, Barbara Baker is hit and killed by an speeding school bus. Astrid Strick is a 68-year-old widow with three children (Elliot, Porter, and Nicky) who has never liked Barbara. But the incident reminds her that life is fleeting, so she decides to come out as a bisexual to her family and tell them about her relationship with Birdie, her hairdresser.

Porter is single, owns a goat farm and is 20 weeks pregnant, via sperm donor. She plans on raising the baby alone. She's also secretly still sleeping with her married ex-boyfriend, Jeremy Fogelman. Elliot is married to Wendy, has twin 3-year-old boys and owns a construction company in Clapham. Nicky moved away after their father, Russell, passed away. Now, he lives in New York, but his daughter Cecelia has just been sent to stay with Asrid due to bullying over an incident at her school.

After Astrid reveals her secret, Elliot is upset. They are surprised because Astrid was very rigid as a parent, especially after Russell's death. Astrid feels guilty because when Elliot was in middle school, Barbara had told her about seeing him kiss another boy, Jack. It's the incident that made Astrid dislike Barbara, and Astrid had told him he needed to hide it. In present day, Elliot has recently purchased an empty building across from Birdie's salon that he plans to develop. He is considering a bid from Beauty Bar, a major salon chain, that would likely compete with Birdie's salon.

At the doctor's office, Porter reconnects with Rachel, an old friend and Cecelia's teacher. But Rachel gets angry when she hears that Porter is still sleeping with Jeremy. Porter also introduces Cecelia with August, a boy at her new school. They become fast friends and join the school's Parade Crew together, August confides in Cecelia that he(she) is trans and goes by Robin at camp. When Sidney, Jeremy's daughter and a mean girl at school, makes fun of August for being trans and of Astrid's coming out, Cecelia punches Sidney.

Nicky and his wife Juliette come to Clapham after the incident. They apologize to Cecelia for shipping her off, instead of fighting harder for her. We learn that back at her old school, Cecelia's (former) best friend Katherine had started messaging an older guy online. When they finally meet up, he locks Katherine in his apartment and jacks off next to her. Cecelia had told an adult, so the other girls had bullied her and called her a snitch. Meanwhile, with her brothers together again, Porter finds the strength to break things off with Jeremy. And Astrid finally apologizes to Elliot for the thing with Jack, but Elliot barely remembers it.

On the day of the Harvest Festival Parade, August decides to present himself as Robin and becomes the star of the show. Elliot tries to punch Jeremy, but Jeremy ducks. Finally, Elliot tells Astrid that the thing with Jack was more about Jack's sexuality than his, and what has always bothered him was a conversation he overheard where his parent had said they didn't think Elliot could cut it as a lawyer or in business. Astrid and Elliot make up.

In the Epilogue, Astrid and Birdie are celebrating their honeymoon by going on a lesbian cruise. Porter's daughter is 6 months old now. The book ends with the family FaceTime-ing together and Astrid feeling happy.

I knew Emma Straub’s All Adults Here would likely be a fun, light read so it was an obvious choice to take to lake-side park for a picnic on the weekend. I didn’t end up feeling very strongly about it, but it was a pleasant enough read for the day if you read it uncritically.

All Adults Here is a sweet and benign book that’s mostly about inclusivity, acceptance and how it’s never too late to make amends or do what needs to be done. There are quite a few story lines woven throughout the book, since each family member has their own journey and their own obstacles to deal with. Porter is woman choosing to become a single mother. Astrid is an sexagenarian (68) who has recently come out to her family. August is transgendered but only gets to be himself at summer camp. And so on.

I liked all the stories, but it seems like Straub could’ve done more with many of them. There’s one about Elliot, the oldest sibling, developing a building at the town center, and that one especially seems like it could’ve had some interesting developments, but basically goes nowhere. Similarly, his wife is presented as a formerly high-powered woman, a Princeton grad and lawyer, who is dissatisfied with her life. She does most of the childcare and her husband doesn’t help out. But nothing comes of that setup, so it seems like Straub didn’t really know what to do with it.

So, yeah, a few of the story lines gear up and sort of peter out, but for the most part the characters each get their own arcs that conclude in a way that more or less makes sense and gives them some type of emotional journey. It’s unchallenging and lighthearted, if a bit pointless. I mean, it’s not, it’s trying to make a few well-meaning points about acceptance and what not, it’s just that it’s so benign that it’s kind of functionally meaningless. But whatever.

All Adults Here is an easy, upbeat and well-meaning read about a family in a small town, all of whom have secrets that they are keeping from each other. It’s a feel-good and unchallenging story about inclusivity, acceptance and forgiveness. I thought it was okay, though I imagine most of the people who will read this are people who already buy into its message.

I think, apart from a few dissatisfying story lines, the main gripe that people are likely to have with this book is that it wants to be inclusive by having a ton of (mostly closeted) LBGTQ+ characters, but doesn’t really get into the nitty-gritty of any of the difficult issues. It’s a very light, weightless read. The same qualities that make it a good beach read are the same qualities that don’t make it a particularly substantive or meaningful book.

That said, it went by really quickly, and it’s a perfectly serviceable, happy story. For those reasons alone, I think plenty of people could enjoy it, even if it’s unlikely to become anyone’s favorite book. For a quick beach read, this is not a bad way to spend an afternoon.

See All Adults Here on Amazon.

Read the first pages of All Adults Here

See Everything We Know About the 'All Adults Here' Adaptation 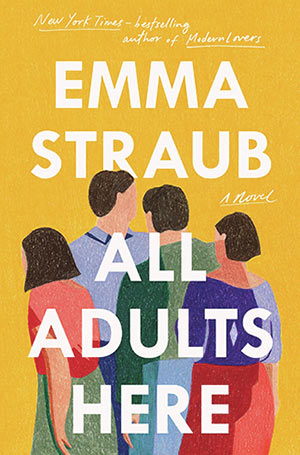 From the Publisher
When Astrid Strick witnesses a school bus accident in the center of town, it jostles loose a repressed memory from her young parenting days decades earlier. Suddenly, Astrid realizes she was not quite the parent she thought she’d been to her three, now-grown children. But to what consequence? Astrid’s youngest son is drifting and unfocused, making parenting mistakes of his own. Her daughter is intentionally pregnant yet struggling to give up her own adolescence. And her eldest seems to measure his adult life according to standards no one else shares. But who gets to decide, so many years later, which long-ago lapses were the ones that mattered? Who decides which apologies really count? It might be that only Astrid’s thirteen-year-old granddaughter and her new friend really understand the courage it takes to tell the truth to the people you love the most.
Show More
Read an Excerpt
See it on Amazon
Share This
social & email
New Reviews
recent releases
New Posts
recently posted
Discussion and Replies