Book review and synopsis for 28 Summers by Elin Hilderbrand, two remorseless cheaters meeting in the summer to cheat over three decades.

In the Prologue in 2020, Mallory Blessing is dying of cancer, and leaves a note for her son Link to call someone. He does, and it turns out to be Jake McCloud, the husband of a current presidential candidate, who agrees to come immediately.

In Part I in 1993, Mallory is in her early twenties when she inherits some money and a cottage in Nantucket. She meets Jake when her newly-engaged brother, Cooper, brings him to the cottage for a mini-bachelor's weekend. Mallory and Jake share a romantic weekend together, but Mallory is reluctant to start a long-distance relationship. Jake soon gets back together with his on-and-off-again lawyer girlfriend, Ursula de Gournsey. Jake and Mallory continue to see each other for romantic weekends over several summers until Ursula's father dies. Jake marries Ursula and the weekends stop. But when their marriage hits a rocky spot, the weekends start up again, with Ursula believing it's an annual boys' weekend. Ursula is soon pregnant, and Mallory also ends up pregnant from a hook-up with a childhood friend of her brother's, Fray.

In Part II, Ursula has her baby, Elizabeth ("Bess"). (Ursula was also having an affair and the baby could potentially be her co-worker's, Anders. However, Anders dies on September 11.) Ursula rethinks her life priorities and decides to run for office. She's elected to the House of Representatives and later the Senate. Meanwhile, Mallory has her baby, Lincoln ("Link"). Mallory dates around, but her heart is stuck on Jake who she continues to see at the "same time, next year" for weekends in Nantucket. Cooper figures out what's going on when Ursula asks him about his non-existent boys' weekends with Jake, and Cooper decides to cut Jake out of his life.

In Part III, Mallory's parents die in a car accident. Ursula suspects Jake is having an affair with Mallory due to a post on a blog by Leland, Mallory's best friend. Ursula asks Cooper, but he lies. Mallory soon learns she has skin cancer. Around the time Link leaves for college, Mallory's vision starts to blur due to the cancer. Meanwhile, Ursula begins her presidential campaign, and she now knows about the affair because one of her donors (Bayer Burkhart) once dated Mallory and she told him. Ursula tells Mallory to stay away from Jake, and she agrees. However, a year later, Jake gets the call from Link (about the cancer). Jake immediately leaves for Nantucket, taking his daughter Bess along. Jake sings to Mallory on her deathbed.

The book ends with Link and Bess meeting, with Link offering to show Bess the way to the beach.

I started reading 28 Summers by Elin Hilderbrand when it first came out, but put it down for a while since I wasn’t all that into it. Still, I’ve been wanting to read (and finish) at least one of her books since I see them around all the time, so I went ahead and finished it this weekend.

Based on the 1978 movie “Same Time, Next Year”, 28 Summers is a romantic and nostalgic frolic across 28 summers over the course of Mallory and Jake’s nearly three decade romance. Each chapter is preceded by a quick reminder of the major events, trends and other cultural icons from that year, and each chapter is dotted with these references, luring you in with a reminder of days gone by.

Hilderbrand does a fantastic job of coming up with believable life journeys and charting interesting paths for each of its characters. She intertwines the story of their lives with current events and the idyllic setting, making it a great setup for some romance.

As a note of warning, this book leans liberal. There’s some talk of politics, largely due to the character of Ursula’s career as a politician. I didn’t think there was much politics in this book, but there is a little. If you’ve very sensitive about that sort of thing, perhaps it’ll be a skip for you.

Main Criticism of 28 Summers: The Cheating

The biggest determinant of whether you’ll like this book depends on how you feel about a) romantic novels in general and b) cheating in relationships. There’s so much cheating in this book.

If you think the idea of desire for someone that could push someone to cheat as being romantic, or if you just love the push and pull of will-they-or-won’t they relationships, then you will probably love this book.

For me, it was a big problem. There’s never a satisfying reason why Jake and Mallory don’t just give their relationship a real shot. In the beginning, Mallory expresses reluctance at engaging in a long-distance relationship. But that’s a pretty thin justification, since at some point over the years two unmarried people would more reasonably choose long-distance over being remorseless cheaters. Especially when Jake quits his job, there’s just no reason why he can’t just move to Nantucket. Later justifications are things like “Jake thinks his wife works too much” which is obviously a terrible justification.

I just couldn’t get past the permissive attitude about cheating and didn’t find it romantic at all. Secret love, my ass. Like, if there was some reason Jake couldn’t leave his girlfriend/wife, it would be more understandable. But “oh, she sometimes disappoints me” is not an acceptable reason. Perhaps I’m just too black and white when it comes to these things.

I think because of that, I found Jake and Mallory each so unlikable. I couldn’t believe Mallory was indignantly screaming about what a good person she was after learning that a guy she’d dated was married. Wasn’t she was cheating all the time with Jake anyway? Cheating’s okay, but only if you’re in on it, is that the rule? I also couldn’t deal with book telling me how “kind and sympathetic” Mallory was for offering some basic sympathy after seeing Jake’s pregnant and retching wife in the bathroom. Are you kidding me? She’s screwing that pregnant woman’s husband, don’t tell me how kind she is!

(I also thought the stuff she was “mad” at Leland for were ridiculous, too. Like, if you’re offended by some minor thing your best friend says, maybe try calmly talking to her about it instead of holding it against her for two decades? And, so what if Leland wants to eat a fancy meal or hang out with other friends, get over it.)

And Jake, oh my goodness. What a spineless, useless loser. Instead of supporting his successful wife (who is competing with men that have wives that support them), he “punishes” her for anything he doesn’t like by cheating on her. Every time she does something he doesn’t like, his response is to use it to justify his cheating.

For example, I couldn’t sympathize with Jake feeling indignant when his wife doesn’t remember his annual trip. It’s just repugnant considering he knows perfectly well he cheats on her (and has been doing so for years on end) during those trips. I don’t know where he gets off acting like he has any right to insist on that trip. And prioritizing it above things like his wife’s career is just nuts to me. That’s not romantic, he’s a jerk.

I just felt like I was in the twilight zone reading this novel where these two delusional people somehow think they’re the good guys with any type of moral standing in this story. I also found it self-centered and weird how Jake and Mallory were so willing to inconvenience their family for the sake of being alone that weekend. Am I somehow puritanical for thinking that unrepentant cheating is not romance? They aren’t star-crossed lovers, they’re just selfish people doing selfish things. I couldn’t care less if they ended up together, honestly.

I really went back and forth with this book. The Nantucket setting is so idyllic and easy to lose yourself in, and the nostalgia in each of the chapters is delightful. I also think Hildebrand does a great job coming up with interesting and believable paths for each of her characters to do down.

But ultimately, this is a romantic story and that was the part I just could not get behind. Each time I found myself getting engrossed in the romance, I felt myself feeling disgusted by these characters’ decisions and horribly selfish behavior. I kept waiting for the moment when they had some self-reflection, but it never came. The justification for the cheating is just a bunch of thinly veiled excuses throughout the book. There’s really no good reason. And the idea of a woman functionally keeping her heart locked away to spend one weekend a year with some loser who won’t leave his wife is pathetic and depressing.

And I hated, hated how the book kept trying to convince me that Jake’s wife was somehow deserving of this behavior because she works a lot. If you hate it, leave her! It just felt a little sexist, like Hildebrand was punishing this character for having a high-powered career.

As I said before, the biggest determinant of whether you’ll like this book depends on how you feel about cheating in relationships. If you think the cheating won’t bother you and you like romance novels, you will probably like this book.

I don’t know if I’d be open to reading another one of Hilderbrand’s books. I wanted to try at least one, and there’s definitely things I liked about her writing, but I think perhaps I have a different idea of what romance is than she does.

Read the first pages of 28 Summers

See Everything We Know About the '28 Summers' Adaptation 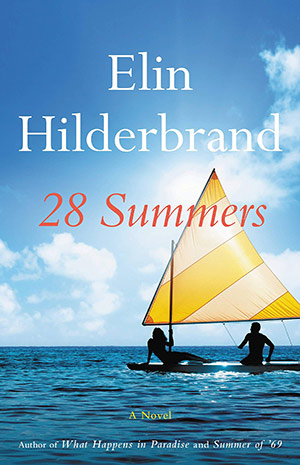 From the Publisher
When Mallory Blessing's son, Link, receives deathbed instructions from his mother to call a number on a slip of paper in her desk drawer, he's not sure what to expect. But he certainly does not expect Jake McCloud to answer. It's the late spring of 2020 and Jake's wife, Ursula DeGournsey, is the frontrunner in the upcoming Presidential election. There must be a mistake, Link thinks. How do Mallory and Jake know each other? Flash back to the sweet summer of 1993: Mallory has just inherited a beachfront cottage on Nantucket from her aunt, and she agrees to host her brother's bachelor party. Cooper's friend from college, Jake McCloud, attends, and Jake and Mallory form a bond that will persevere -- through marriage, children, and Ursula's stratospheric political rise -- until Mallory learns she's dying.
Show More
Read an Excerpt
See it on Amazon
Share This
social & email
New Reviews
recent releases
New Posts
recently posted
Discussion and Replies