Main / Books / We Were Never Here

We Were Never Here

Book review and synopsis for We Were Never Here by Andrea Bartz, a quick but predictable thriller about two best friends who end up in hotel room with a dead body.

We Were Never Here is about two best friends, Emily and Kristen, who go on vacation in Chile and end up in a hotel room with a dead body. Kristen says the man attacked her and that she killed him in self-defense.

As much as Emily wants to believe her, she's still recovering from the trauma of a very similar incident that happened to them one year ago on their annual trip together. Can it really be possible that something like this could happen twice?

The one-paragraph version: Emily and Kristen are on vacation in Chile when Kristen kills a man, saying that he attacked her. Together, they dispose of the body. It mirrors an incident last year when Kristen had killed a man that tried to assault Emily. Soon, Kristen ends up moving home to where Emily lives and becomes increasingly clingy. Emily suspects Kristen feels threatened by Emily dating someone new, Aaron. Emily starts to realize how Kristen always wants Emily to herself and has sabotaged her past relationships. She thinks that Kristen killed the man in Chile in hopes it would bring them closer over the shared trauma. When Kristen finally blackmails Emily over the deaths to force her to stay close to her, Emily tries to push Kristen off a cliff but has a change of heart. Kristen then tries to kill Emily, but is stopped and killed by Aaron.

Emily Donovan and her best friend Kristen Czarnecki are on vacation in Chile when Emily returns after a night out to find Kristen in the room with a dead body. Kristen says the man she'd invited back, Paolo, assaulted her after being unwilling to take no for an answer.

Emily is shocked and still traumatized over very similar events that had transpired when they were on vacation in Cambodia just last year. In that case, Emily had invited a guy back to their hotel -- Sebastian -- and he had gotten too rough with her. When she told him to leave, he attempted to assault her until Kristen happened to return to the room to stop him. Sebastian had died, and they'd gotten rid of the body by tossing it off the nearby cliff into the water.

In present day, they rehash a conversation they've had before about how difficult it can be to deal with foreign police. Once again, the women realize the only option is to get rid of the body. Upon returning home to Milwaukee, Emily feels unsettled by how unbothered Kristen seems to be and the strange coincidence in this happening twice to them.

Emily finds herself wanting some distance from their friendship, but Kristen shows up at her door saying that she's moving back to Milwaukee (from Sydney). Kristen is staying with her grandparents (because her parents died in a house fire when she was 12).

Kristen soon hijacks Emily's birthday plans to turn it into a weekend away for the two of them at Kristen's grandparent's lake house. Emily suspects the Kristen is so eager to keep her close because she feels threatened by Emily dating someone new, Aaron. She eventually starts to think about her past relationships, and starts to think that Kristen has wanted to sabotage them to keep her to herself.

Meanwhile, the Chilean police have found Paolo's body. It turns out he is American and from a wealthy family who is offering a $1M reward for information about his death.

When they get back home, Emily starts to pull away from her friendship with Kristen, but Kristen reminds her that she has dirt on her through a photo she has of Emily and Sebastian together. When they get into an argument, and Kristen threatens to turn it over to the authorities. Kristen also shows her that she still has evidence of the Paolo murder to use against her as well, and Kristen insists that Emily was the one who killed Sebastian, not her.

Desperate to get away from Kristen, Emily plans an impromptu weekend trip away to Arizona with Aaron. However, Kristen shows up there. In the meantime, the police have now released a sketch of who they think was involved in Paolo's murder, who they've identified as an American woman. The police have also determined that Paolo was drugged before he was killed.

In Arizona, Kristen forces Emily to hang out with her. Feeling cornered, Emily thinks that Kristen has underestimated her, and she realizes that she (Emily) really was the one who killed Sebastian. With that in mind, Emily shoves Kristen off a nearby cliff. However, Kristen ends up hanging off a ledge, and Emily has a change of heart and saves her.

When Aaron comes driving up, Kristen then retaliates by trying to shove Emily in front of his vehicle. But Aaron manages to swerve in time and instead he hits Kristen and they both go careening off the cliff.

Ultimately, Aaron survives, but Kristen dies. At the hospital, Kristen's godparents show up -- Jamie's parents. Jenny (Jamie's mother) tells Emily that she knows Kristen was trouble and had been a bad influence, but she still felt bad for her. Kristen was always trying to get Jamie to misbehave or she'd do bad things and try to convince Jamie that she (Jamie) did it.

Jenny later learned that Kristen's father had been abusing Jamie. Jamie thought the only way to stop it was to kill him, so she started the house fire not realizing that Kristen's mother was home (as was Kristen, but Kristen escaped). Soon after, Jamie killed herself.

In present day, Emily tells Aaron the full truth about what happened, saying that she's willing to turn herself in to prevent him from being charged with Kristen's murder. But he helps her find a lawyer, Deirdre. Soon, the police tie Kristen and Emily to Paolo's death. However, Deirdre convinces them that Kristen had been blackmailing Emily, and they drop the case against Emily. Also, the Arizona police initially think Aaron and Emily purposefully killed Kristen to shut her up, but eventually they give up after they determine they are unable to build a compelling case against the two of them.

We Were Never Here by Andrea Bartz is a thriller and the latest pick for Reese’s Book Club.

The book opens with one of the characters, Kristen, killing a man while she’s on vacation with her best friend, Emily. Kristen claims it was in self-defense, but the incident is oddly similar to something that happened the last time they were vacationing together just last year. As a result, Emily starts to question her friendship with Kristen and what exactly happened that night.

When I started the book, I realized on some level that the premise of it didn’t really grab me to begin with, but I gave it a shot anyway since I’ve been pleasantly surprised by some of Reese’s book club picks in the past.

By about halfway into the book, however, the plot still hadn’t moved past the point described on the cover blurb (basically what I summarized above), and I was getting a little bored. There’s also somewhat of an element of ridiculousness to the whole book, but to be honest that’s not what really bothered me.

Instead, a bigger issue is that fairly early on in the book, it’s clear what’s really going on and there aren’t really many surprises from there. The plot ends up playing out in a fairly predictable way, and I struggled to stay interested in it. There’s some attempt by the author to psycho-analyze these characters, but I didn’t find it all that satisfying. 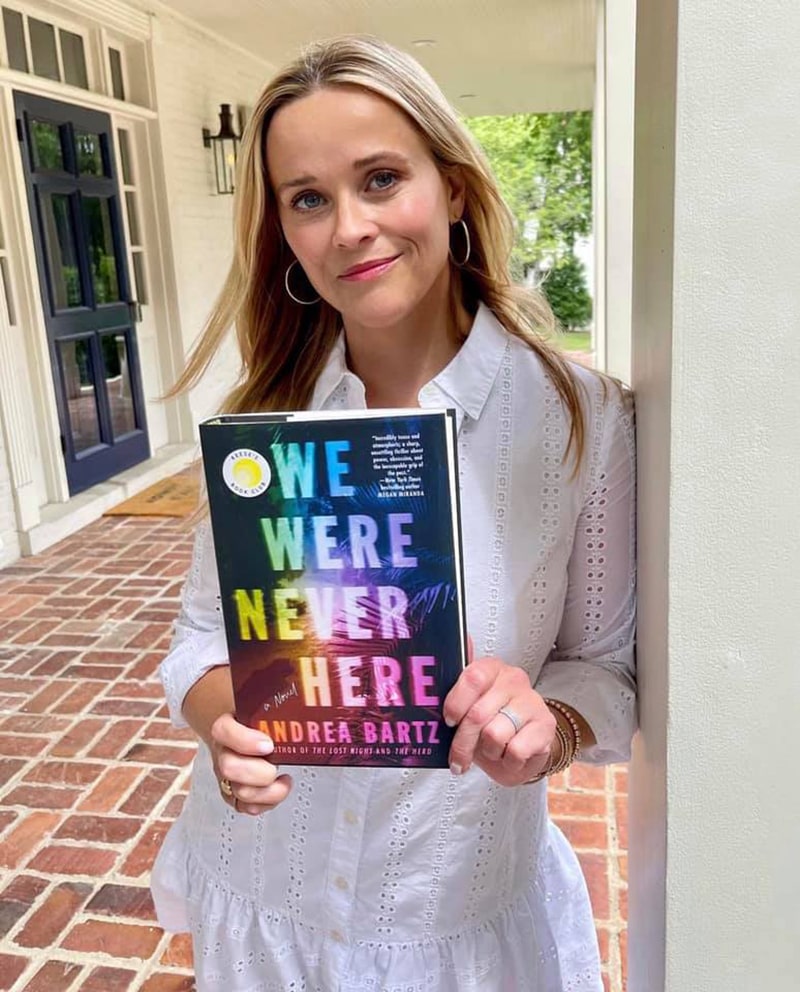 Overall, I felt pretty “meh” about this book. It wasn’t bad, I just didn’t think it was exactly good either. There is some suspense and tension there, and it’s a quick and easy read, but ultimately I found it too predictable. I’m not sure it’s one I’d want to recommend to others.

Feel free to share your thoughts about this title below!

See We Were Never Here on Amazon.

We Were Never Here Audiobook

Hear a sample of the We Were Never Here audiobook on Libro.fm.

We Were Never: The Ending Discussion

SPOILERS AHEAD. Proceed with caution!

So, the most commented-on part of the book seems to be the very last part where Emily and Aaron are traveling in Turkey. Emily introduces herself as “Joan” (the fake name she used to use when meeting new people with Kristen on their travels), and she introduces Aaron as “Dan”.

So for me, when I read it, I mostly took it just as a reminder that, for all of Kristen’s faults, there’s a part of her that made things more fun for Emily and that Emily ultimately was a willing participant in their dysfunctional friendship.

Other people seem to have interpreted it as some sort of hint that Emily may continue to run into trouble during her travels, that perhaps it’s a nefarious indicator that she’s more of a contributor to getting herself into these sticky situations than the narration of the book previously indicated, etc.

Either way, it’s clearly purposefully left kind of ambiguous. Feel free to drop a comment to share your own thoughts on the ending!

Read the first pages of We Were Never Here 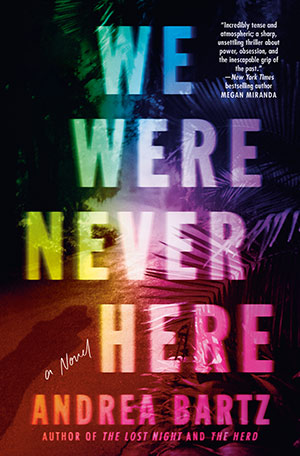 Emily is having the time of her life—she’s in the mountains of Chile with her best friend, Kristen, on their annual reunion trip, and the women are feeling closer than ever. But on the last night of the trip, Emily enters their hotel suite to find blood and broken glass on the floor. Kristen says the cute backpacker she brought back to their room attacked her, and she had no choice but to kill him in self-defense. Even more shocking: The scene is horrifyingly similar to last year’s trip, when another backpacker wound up dead. Emily can’t believe it’s happened again—can lightning really strike twice?

Back home in Wisconsin, Emily struggles to bury her trauma, diving headfirst into a new relationship and throwing herself into work. But when Kristen shows up for a surprise visit, Emily is forced to confront their violent past. The more Kristen tries to keep Emily close, the more Emily questions her motives. As Emily feels the walls closing in on their cover-ups, she must reckon with the truth about her closest friend. Can Emily outrun the secrets she shares with Kristen, or will they destroy her relationship, her freedom—even her life?