Main / Books / We Were Liars

We Were Liars
(Review, Summary & Spoilers)

Book review and synopsis for We Were Liars by E. Lockhart, a mystery involving a four teenagers set on a private island.

In We Were Liars, Cadence Sinclair is the eldest granddaughter in the wealthy and attractive Sinclair family. All athletic and blond, the Sinclairs live off of Grandfather Harris's fortune and spend their summers vacationing on his private island.

Cadence and her friends are nicknamed the Liars and are a tightly-knit group until one summer when Cadence ends up in a serious accident. As Cadence pieces together the circumstances of her accident, she will discover the truth about herself and her family.

One paragraph version: Cadence Sinclair comes from a family of wealthy and beautiful people. They spend their summers on their private island. The summer she is 15, she has an accident that leaves her with a brain injury, with migraines and gaps in her memory. Two years later, she returns to the private island determined to figure out what happened that summer. She slowly recalls her bits pieces of fights between her mother and aunts over inheritances and assets, fueled by her grandfather pitting them against one another. Finally, in the end, Cadence remembers that she and the other teenage grandchildren had decided to burn down their grandfather's house when it was empty in anger over being dragged into their parents' fights over money. However, it went poorly and the other teens died in the fire. The migraines and memory loss were a result of her guilt and inability to face the truth.

In Part I, the book introduces Cadence Sinclair, who is the eldest granddaughter in the wealthy and beautiful Sinclair family. Everyone in the Sinclair family is blond and athletic, and their patriarch is Cadence's grandfather Harris, who is the one who made the family fortune that they all live off of.

The Sinclair family spends each summer on Beechwood Island, a small private island where Harris has built four summer homes, one for him and his wife Tipper and other three for each of their three daughters (Penny, Bess and Cassie).

There are two other grandchildren who are Cadence's age -- Johnny and Mirren. Johnny's mother also dates an man named Ed, whose nephew Gat Patil is their age as well. Together, these four (Cadence, Johnny, Mirren and Gat) hang out together during the summer and have been nicknamed the Liars by the family.

The summer the Liars are all 14 ("summer 14"), Cadence and Gat starts developing feelings for each other. The following year, Tipper passes away and Cadence's parents divorce. When Cadence returns to the island the next summer ("summer 15"), Gat has a girlfriend back home. Still, Cadence and Gat continue to flirt and occasionally kiss.

That summer, Cadence has a swimming accident resulting an un-diagnosable brain injury, which causes her to have gaps in her memory and gives her migraines afterwards. She stops hearing from Gat. The following year, she flunks her classes, dyes her hair black, loses her friends and drops all her school activities. The next summer, summer 16, Cadence goes to Europe with her father, and she's hurt that she doesn't hear from the other Liars at all.

In Part II, that year, Cadence embarks on a project of giving away all her stuff, since she wants to be less materialistic. Cadence also insists on going back to Beechwood for summer 17, and her mother arranges for her to go to the island for four weeks.

In Part III, Cadence arrives at Beechwood determined to figure out what happened during summer 15. However, everyone says that the doctors want her to recall it on her own. As she recalls bits and pieces, she remembers her mother and her siblings fighting over their inheritances and Granddad's assets, though they seem to be getting along well in present day. Cadence also notices how her Granddad's house has now been remodeled and is missing all of Tipper's old things.

In Part IV, Cadence finally recalls that there was a fire during summer 15. The Liars had set it on purpose. During summer 15, without Tipper to keep them at bay, their mothers' fighting had gotten much worse, spurred on by Granddad them against each other in order to regain his sense of control. In turn, their mothers started demanding that the kids get involved in their fight as well. Granddad had also become hostile toward Gat once he saw that Gat and Cadence were involved.

The Liars had gotten the idea to burn down Granddad's house when everyone was gone in order to destroy what they viewed as a "symbol" of everything that was wrong in their family (this is why all Tipper's things are gone now). Upon remembering all this, Cadence initially feels triumphant, thinking that their plan worked since their mothers aren't fighting anymore. H

In Part V, Cadence finally remembers the last bit, that not only did Granddad's dogs died in the fire, so did the rest of the Liars. Johnny, Mirren and Gat weren't able to get out of the house in time after Cadence lit the first match. Instead, only Cadence was able to get out. The book ends with Cadence finally facing her guilt and knowing that she will endure.

We Were Liars, by E. Lockhart, is one of those books I’ve been meaning to read for a long time. It’s considered a young adult novel, but most seem to recommend it for the older end of that bracket.

It’s also a great beach read for those looking for some summer reading and it’s the pick for one of my book clubs this month! So, I thought I’d review it here even though the book was published back in 2014. It’s one of those books that has managed to keep cropping up many years after it’s release.

We Were Liars is a YA mystery involving a group of teenagers who vacation with their family on a private island during the summers. When summering on the island, one of the teenagers, Cadence, ends up with a brain injury as the result of a swimming accident when she’s 15. Two years later, she returns to the island to piece together what really happened.

It’s a family drama that also offers a surprisingly incisive look at the corrosive effect of wealth on familial relationships. Despite this being a YA novel, I think it handles the topic more effectively than many adult novels.

The construction of the story itself is very solid. I’ve read a lot of mysteries that rely on a lot of nonsensical things (people acting in completely irrational or outlandish ways, ridiculous plot twists, etc.) and this is not one of those books. From beginning to end, you can tell how carefully thought-out and plotted the book is.

When the ending was revealed, I was surprised by it, but it also made total sense. Though I should mention that a large portion of my book club guessed the ending so perhaps your mileage will differ.

That all said, while I felt the story was very well-constructed and a good mystery, but I’m a little on the fence on how much I actually enjoyed the process of reading it. The writing style made sense for the story being told, but didn’t really appeal to me. I also felt like the middle part of the book where Cadence (and therefore you as the reader) have no hint of what’s really going on drags on for a little too long.

Stylistically, the writing comes across as a little angsty and indulgent. I wouldn’t like this style for most books, but it seems to make sense for a narrative told in the perspective of a disillusioned 17-year-old girl. I personally didn’t particularly enjoy the writing style, but I think it works for this particular story.

If you like mysteries, I think this one is worth a read, though opinions tend to be mixed on this novel. It does make for good summer reading, since it’s an easy read that’s set on summers on a private beach.

My book club chose this book, though I think it’s just okay as a book club read. There’s a decent amount of substance there involving how wealth impacts their family dynamics, but it’s less layered of a story that I’d ideally like for a book club read since I typically recommend books that have more “stuff” to discuss.

We Were Liars Audiobook

Hear a sample of the We Were Liars audiobook on Libro.fm.

Read the first pages of We Were Liars 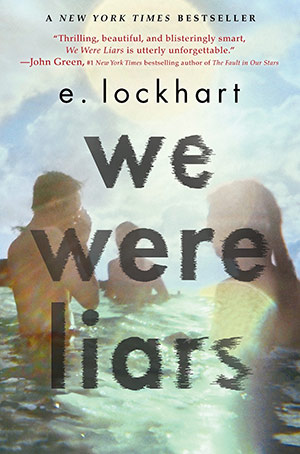 From the Publisher
A beautiful and distinguished family.
A private island.
A brilliant, damaged girl; a passionate, political boy.
A group of four friends—the Liars—whose friendship turns destructive.
A revolution. An accident. A secret.
Lies upon lies.
True love.
The truth.

Read it.
And if anyone asks you how it ends, just LIE.