Main / Books / The Tragedy of Arthur

The Tragedy of Arthur

By Arthur Phillips, A Tedious Read with a Deceptively Good Premise

Phillip’s tale is a faux-memoir, presented as an “introduction” to a newly uncovered work of Shakespeare’s, titled “The Tragedy of Arthur,” followed by a hundred pages or so which comprise the actual text of the play in question. The provenance of the fictional work, though, was that it had been given to Arthur Phillips (the titular character shares the name of the author) and his twin sister by their father, who is a forger currently doing time in prison, as he had been doing on and off for most of their childhood. And so Phillip and his sister end up investigating the authenticity of the document.

Before I continue, I should mention that I did not finish this book and have no intention of forcing myself to do so, mostly because I try to be kinder to myself than that. I got through about 150+ pages, skimmed a little more and glanced through the text of the play itself and gave up. I was really disappointed because the premise of it sounded really promising.

So, back to the premise: In introducing the play, Phillip is explaining its origins, and he delves deep into the complexities of his relationship with his twin sister, Dana, and his father, who raised both kids on Shakespeare and is the one who gave them this long lost work of Shakespeare’s. As mentioned above, however, Phillip’s father, is an unabashed and unapologetic forger and spent their childhood in and out of prison due to his misdeeds. Phillip has grown up on being given various forgeries by his father and understandably has doubts about about the authenticity of this document. So Phillip and his sister engage in an investigation of these claims, and Phillip ultimately ends up publishing the book. But at the same time you should also be questioning the reliability of Phillip’ narration since obviously he has a vested interest.

Honestly, I am very surprised people liked this book, even with such an intriguing premise. I realize there are a number of literary devices he was trying to use — unreliable narrator, faux-memoir format, a meta inquiry into forgeries, etc., but I just don’t think they came together to form a book that was particularly interesting or enjoyable. I think these devices are useful when they allow you to create something more (see the review on The Sense of an Ending), but turn into crutches and gimmicks when the author ends up getting wrangled in by them instead, which is what I think happened here.

I also found the writing very tedious — not difficult, but just tedious. And it goes very chronologically, which I think was a mistake because it starts when these kids are like 6 or 7 so the plot just never seems to get off the ground. It’s like when people are kidding around and they say that they’re going to tell a long story, and they jokingly say “well, when I was a small child” — and then everyone laughs because you know no one wants to hear that shit. Except in this book he does it anyway.

The only explanation I can surmise for his telling it this way is to make it read more like a memoir, but in that case, I would say this is why trying to be gimmicky has failed. I think if you’re trying to shove your story into a gimmick, but it comes at the expense of good story-telling, then it’s not a very good gimmick. And anyway, it doesn’t end up reading like any introduction that a book would print, which is what is claims to be so it fails anyway. And his sprinkling of actual facts about himself in the book to blur the line of reality and fiction also seemed gimmicky and a little narcissistic.

The last hundred pages or so is the fake Shakespearean play, which I glanced at. I think some people found this interesting; I did not. I am aware other people (claim they) liked it. There’s a conversation the father character has with Phillip early on about his forgeries — why does it matter who really made it? Isn’t that just a brand name? If it’s good, it’s good right? So, okay, point made, and it’s valid. But I would argue that it matters if someone was creating something new versus copying the style of someone else, and I would also point out that sometimes part of what makes things like art, architecture, and writing interesting and lends them new meaning is the context in which they are created.

It also grated on me when Phillip kept noting things like (paraphrasing), “as to why I ended up with the book, well, we’ll get to that later.” Each time I would think, I’ve been reading this for a long time, so maybe you could get to some of it now since I am getting very bored about these two fictional kids and their scummy dad, and have no idea why any of this shit you’re telling me matters. I think putting in stuff like that is such an incredibly lazy narrative device. It’s basically saying, “hey, I know I’m barely keeping your interest, but it gets more interesting later, I promise.” (Instead of actually structuring the book in a way to sustain someone’s interest.)

So, yeah, I couldn’t get into it. The book also has sort of a pretentious air to it, especially in the dialogue. I think maybe a larger issue for me was that I’d just read that biography on Shakespeare so every factual inconsistency stuck out to me. I think some people enjoyed the suspension of belief that maybe this could happen and this could be real, but my knowledge of, you know, actual facts was sort of hard to separate out. This book also plays on the whole “maybe Shakespeare didn’t write his plays” which I guess is not an impossible thing, I wasn’t there, except there’s just no evidence to support it.

Suffice to say, I didn’t like the book. I just don’t think it was as clever as it thinks it is. Perhaps this review a little harsh (I hope the author never comes across this), but I really was pretty disappointed by this one. I also realize it’s kind of lame to review a book you didn’t bother to finish, but I disliked it enough that I think people deserve fair warning. Mea culpa. 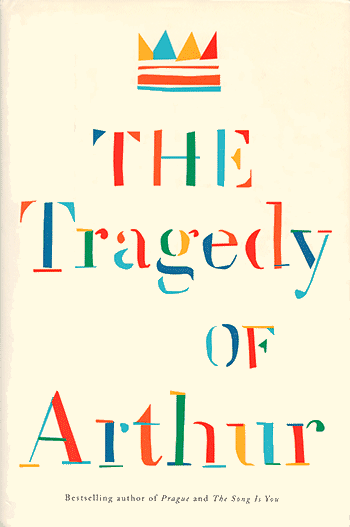 From the Publisher
The Tragedy of Arthur is an emotional and elaborately constructed tour de force from “one of the best writers in America” (The Washington Post). Its doomed hero is Arthur Phillips, a young novelist struggling with a con artist father who works wonders of deception. Imprisoned for decades and nearing the end of his life, Arthur’s father reveals a treasure he’s kept secret for half a century: The Tragedy of Arthur, a previously unknown play by William Shakespeare. Arthur and his twin sister inherit their father’s mission: to see the manuscript published and acknowledged as the Bard’s last great gift to humanity . . . unless it’s their father’s last great con. By turns hilarious and haunting, this virtuosic novel, which includes Shakespeare’s (?) lost play in its entirety, brilliantly subverts our notions of truth, fiction, genius, and identity, as the two Arthurs—the novelist and the ancient king—play out their strangely intertwined fates.
Show More
See it on
Share This
social & email
New Reviews
recent releases
New Posts
recently posted
Discussion and Replies