Main / Books / The Sense of an Ending

The Sense of an Ending

By Julian Barnes, A Well-Crafted, Elegant Novel on the Vagaries of Memory

Julian Barnes’ The Sense of an Ending opens with a list of memories and an almost ominous warning, “But what you end up remembering isn’t always the same as what you have witnessed.” It is a deceptively simple book — in that it’s not simple at all and to get it, you have to think hard about it, and re-frame what you think you know over and over, but you won’t end up with a clear answers. I should warn that there will be some spoilers here, but I’ll give a warning before they start.

The book itself is not lengthy and the premise seems straightforward, as is the writing. The language of the book is clear and precise. Tony Webster is at the end of his life and reflecting upon certain events in the past, namely his first girlfriend, the mysterious Veronica, who ends dating one of his childhood friends, Adrian, after they break up. Adrian was the intelligent and serious one of their group, and he commits suicide not long thereafter.

At first glance, the questions presented by the novel seem simple though thoughtful — it is a rumination on the vagaries of memory, on nostalgia, on how memory is shaped by self-preservation, on how memory fails you, on how memories can be resurrected and reshaped. Additionally, the book considers how people are shaped by their past, is it additive? Multiplicative?

The book discusses these themes throughout, and it even lays these questions out, but slyly, to you in various ways. For example, in the beginning of the novel there’s a scene with Tony and Adrian in class. In that conversation, Adrian describes history as “that certainty produced at the point where the imperfections of memory meet the inadequacies of documentation” — which becomes key to what this book is really being about, though you won’t understand it fully until very literally the last page. But, with these considerations in mind, the book proceeds as Tony reflects upon a visit with Veronica’s family (where her mother warns him not to let Veronica get away with too much), his behavior towards Adrian upon finding out about his new relationship with Veronica, and so on.

Towards the end, however, the book gets increasingly confusing and it’s clear that the book’s ruminations are more than just errant thoughts, but rather a barrier to understanding the events. Tony attempts to meet up with Veronica, now graying and in her sixties, to get from her Adrian’s diary, which confusingly enough has been willed to him by Veronica’s mother upon her death, along with 500 pounds. Veronica is cold to him, but it’s unsurprising given that their relationship once upon a time ended with them breaking up, her finally sleeping with him, and then him refusing to take her back anyway.

As Veronica’s behavior and that of her brother get more and more incongruous and inexplicable, it’s clear that we’re trying to piece together answers that we have no way of getting because Tony is our narrator and his memory is all we have, and he doesn’t get it. In fact, Barnes tells us this repeatedly through the voice of Veronica who chastises Tony “You still don’t get it. You never did, and you never will. So stop even trying.”

However, before revealing itself, the book tricks you and presents a false ending (hence, the title, The Sense of an Ending). Tony learns that Adrian killed himself after fathering a child who has down syndrome or some type of genetic disorder. At this point, as the reader, you feel the book has resolved itself. You believe that the point of the story is that Tony has been recasting his relationship with Veronica in his memory. He is still in love with her, but she had always preferred Adrian and she has been angry because Tony was mean to them when they got together, and she must have had a hard life as a single mother after that. So he writes her a final apology, a true heartfelt one, and can let this go. Or so you think, since this type of ending is what most books give you. A small reveal, and then a relief from the tension that’s been building up.

(P.S. Seriously, stop reading if you don’t want me to ruin it for you.)

But that’s not the end. Fact is, by the end, we don’t fully get it. And we all probably never will, though the book leaves us hints. The last page reveals that Tony had drawn an incorrect conclusion, and that Adrian’s child was actually with Veronica’s mother, with whom he presumably had an affair. From there, the book ends suddenly, leaving the reader to reconsider the whole book in that light and recasting the events, yet again, based on what we know now.

Upon reflection, the book leaves a number of hints, but very little certainty, regarding what actually happened back in those days. Tony mentions early on that be believed Veronica had been damaged somehow, even when he first meets her, but he never knew how. Tony describes Veronica’s father as seeming red-faced when they meet — was he an alcoholic? Veronica’s brother is obviously intelligent but is lacking in seriousness in a way that hints at some type of psychosis. And Veronica’s mother, well, they clearly have a bad relationship but it’s impossible to what the boundaries of it are. Has her mother tried to seduce another of her boyfriends before? Why does Veronica leave him alone with her mother on purpose one morning — was it a test? When Tony meets Adrian’s son, he identifies himself as a friend of Veronica’s, which scares him. What did Veronica become after having to welcome this child into her family? Did Veronica really burn the diary? If she did, was it an unspoken act of kindness toward Tony since he didn’t want him to live with the guilt? Did Veronica really prefer Adrian to him or was she trying to hurt him back? Why did Veronica wear a red ring on her fourth finger?

In the end, very little is known for sure, since Tony will never know and his memories seem to betray him sometimes. Veronica clearly harbors a deep-seated resentment not just towards him, but towards life in general, and it is unlikely she will ever provide him or anyone else with the answers. Additionally, Tony himself seems either consciously or unconsciously manipulative of his own memories, whether out of an involuntary self-preservation or something else, his memories are revised and revisited as the book goes along so that it’s not clear what exactly can be trusted. It’s clear that Tony tries to be self-aware, but the novel hints that he is not entirely successful, so conclusions that he presents about certain events can’t be trusted. It’s also entirely possible the “information” Tony receives at the end from the third-party source could be false as well, who knows?

Tony’s last thoughts are about his role in the sequence of events, including a secret gesture Veronica’s free-spirited mother made to him when saying goodbye. His role includes introducing Veronica to Adrian and, in anger, suggesting that Adrian consult Veronica’s mother about her. However the book ends with a note that he feels some sort of responsibility and “great unrest” with regards to Adrian’s death, which hints that maybe there are things we still don’t know about his role.

When I read the last sentence, my first instinct was that it had let me down — I don’t get it, I thought. This book makes no sense. Why did it win the Man Booker prize? It took some rolling around in my head before things started to come together and the little hints that didn’t seem important at the time gained new relevance — for example, Tony muses at one point that even if you do record everything, take photos and write things down, you likely find you didn’t record the right things, etc.

The Sense of an Ending is what a really well-crafted and elegant story is all about. It is unquestionably, to me at any rate, a gem of a novel, even if I was left with a lot of questions — but I guess that’s almost the point. It’s a thinking person’s book, with a simple plot but complicated thought process behind it, and written in a way that feels very respectful of the reader’s time.

Not everyone will appreciate this type of book, I imagine. It’s not a flashy car chase and huge special effects kind of novel, but those who do like these types of things and take the time to read it carefully will be well compensated for their effort. 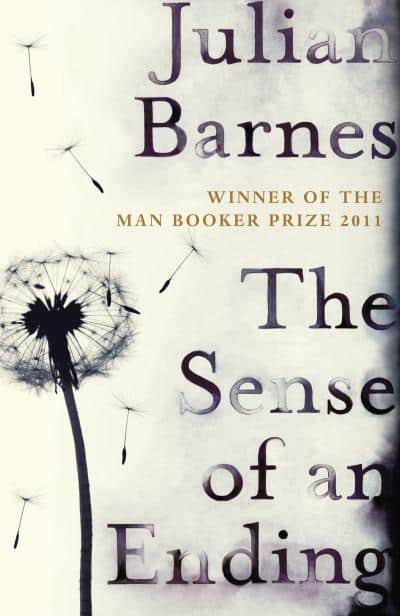 From the Publisher
A novel so compelling that it begs to be read in a single setting, The Sense of an Ending has the psychological and emotional depth and sophistication of Henry James at his best, and is a stunning achievement in Julian Barnes's oeuvre. This intense novel follows Tony Webster, a middle-aged man, as he contends with a past he never thought much about—until his closest childhood friends return with a vengeance: one of them from the grave, another maddeningly present. Tony thought he left this all behind as he built a life for himself, and his career has provided him with a secure retirement and an amicable relationship with his ex-wife and daughter, who now has a family of her own. But when he is presented with a mysterious legacy, he is forced to revise his estimation of his own nature and place in the world.
Show More
See it on
Share This
social & email
New Reviews
recent releases
New Posts
recently posted
Discussion and Replies