Main / Books / The Turn of the Key

The Turn of the Key

Ruth Ware released a new mystery yesterday, entitled The Turn of the Key. As a mystery lover, I’d been looking forward to this one.

If you’re looking for an explanation of the ending, it’s at the very end of the post (after the spoiler warning)!

In The Turn of the Key, Rowan gets a job as a live-in nanny, working for a wealthy couple in their technologically-advanced home. However, the longer she’s there, the more she can tell there’s signs that things feel a little off, from the misbehaving kids to the creepy garden of poisonous plants in the back. Soon, she hears from the locals and other people about the many stories of death and murder in the home’s enigmatic past.

By the end, Rowan will find herself awaiting trail for the murder of a young child, but how she ends up where and why are the questions at the heart of this haunted house mystery.

In the book, the house in question was once the typical haunted house with a storied and mysterious history, but has since been gutted and updated to cutting edge technological standards by the current family, the Elincourts.

Ware presents a modernized version of the old Haunted House story. Instead of creaky doors and candlelight blowing out, there’s technology that malfunctions and user setting that are messed up so that lights don’t turn on. Is it as creepy as the old-school version? Maybe not, but it’s an interesting twist on an old mystery trope, so overall I had to give Ruth Ware props for trying it.

As the mystery deepens, there are a lot of intriguing elements that get put into the story. Some are fairly typical like creepy attics and disembodied footsteps, but I thought the garden of poisonous plants was a particularly creative touch that I haven’t encountered before, or at least not that I can remember.

That said, when the story concludes, it’s a little anti-climactic. It makes sense reasonably enough so I won’t completely discount it, but it doesn’t quite stick the ending.

There’s two minor twists that aren’t entirely set up properly. They don’t play enough of a place in the plot and there’s not enough clues throughout the book for it to feel like a real “reveal.” The final twist (the conclusion to the book) is just okay. It makes sense and is reasonably surprising, though it leaves so much of the other events in the book to be chalked up as random coincidences or things that amount to nothing that it’s not entirely satisfying.

This one is tough, because I did think the plot was interesting and mysterious. And the ending makes sense at least which is always nice. At the same time, the ending really was kind of a let down. The resolution doesn’t really have that satisfying feel when everything comes together. There’s a lot of details that seem like they should be part of the mystery but end up just falling away as creepy coincidences at the end.

I guess I would still recommend this book for people who like mystery-thrillers, but I’d describe The Turn of the Key as a fairly run-of-the-mill entry into this genre. I would definitely consider reading a different Ruth Ware book later though, since I thought the writing was fine and the story was interesting.

That said, if you’re looking for a haunted house story with a more solid ending, I’d recommend Lock Every Door which came out earlier this year by Riley Sagar, over this one. Still glad I read this one though!

Spoilers and Explanation start here! Don’t read beyond this point if you haven’t read the book! Keep reading if you’ve read the book, but have questions!

Where can I find a full plot summary of the Turn of the Key?

Right Here! For the full summary of The Silent Patient, scroll down a little (below the line break) and click Show/Hide Detailed Plot Summary

There are certainly homages to The Turn of the Screw in Turn of the Key, and the initial setup has some similarities. In both, the main character arrives to a large house as a governess/nanny and the primary guardian/parents is largely absent.

However, the actual plot of The Turn of the Key is vastly different.

How did Maddie have access to the attic in the Turn of the Key?

I’m not really sure about this one, but from the looks of it (based on what Ellie wrote in her letter), it sounds like she might’ve climbed from Rachel’s window up to the attic.

What happens at the end of the Turn of the Key?

In the end, we find out that Rowan’s real name is Rachel — she pretended to be her ex-roommate who had better qualifications than she did. Moreover, Rachel’s dad is Bill Elincourt, who left her mom when she was nine months pregnant. She applied for the job because she was Googling his name and saw it as a chance to get to know him.

We find out that the reason that the nannies keep leaving is because Bill Elincourt sexually harasses all of them. The first one (who stayed the longest) was Holly, and Bill had an affair with her. This is why Jean, Rhiannon and Maddie are so unfriendly because they don’t trust the nannies.

As we know from the beginning, Rachel becomes the prime suspect. She has written this letter in order to ask a lawyer for assistance. However, in the epilogue we learn that she never ended up sending the letter. Presumably, this is because she gets a letter from Ellie admitting that she (Ellie) was the one who pushed Maddie. Maddie was trying to get rid of Rowan/Rachel, and Ellie wanted her to stop. So, it seems like Rachel doesn’t send the letter in order to keep Ellie’s secret. In other words, no, I do not think Rachel ends up getting out of jail. But I think this is open to your interpretation.

Ellie also tells us that Maddie was the one who was messing around in the attic and who planted the antique doll head downstairs in order to scare Rowan/Rachel into leaving.

As a side note, some people have argued that the ending is left a little vague. Perhaps she did send the letter or perhaps something happened to her to prevent her sending them. I think you could reasonably make these argument, though I personally don’t think that’s the case here. The letters state clearly they were never sent and that Ellie admitted to killing her sister. I don’t see any evidence that points to anything else. 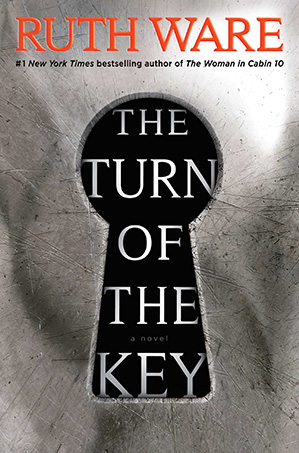 From the Publisher
When she stumbles across the ad, she’s looking for something else completely. But it seems like too good an opportunity to miss—a live-in nannying post, with a staggeringly generous salary. And when Rowan Caine arrives at Heatherbrae House, she is smitten—by the luxurious “smart” home fitted out with all modern conveniences, by the beautiful Scottish Highlands, and by this picture-perfect family. What she doesn’t know is that she’s stepping into a nightmare—one that will end with a child dead and herself in prison awaiting trial for murder.
Show More
Read an Excerpt
See it on Amazon Book Depository