Book review and synopsis for The Nickel Boys by Colson Whitehead, a descent into the horrors of a reform school in Jim Crow-era America.

In The Nickel Boys, Elwood Curtis is a straight-laced and principled boy growing up in the black neighborhood of Frenchtown in Tallahassee, Florida. He works hard and has dreams of participating in the black civil rights struggle.

An unlucky encounter lands him in Nickel Academy, a state-sponsored reform school for boys. There, Elwood meets Turner and a host of other black boys looking to navigate the system and work their way out.

On first glance, Nickel appears innocuous, with its neatly kept lawns and red-brick buildings, but harsh and horrific realities gradually set in. Through these boys, Whitehead provides a glimpse into Jim Crow-era America, its grisly secrets and its lessons on human nature and racial inequality.

In the Prologue, Elwood Curtis, an older black man, decides it's time to go back to a reform school he once attended after bodies buried in a secret grave on campus are discovered.

In Part I, we meet a young Elwood in 1962. He spends a lot of time in the kitchen of the Richmond Hotel in Talahassee, where his grandmother works. He's always hoping to one day see brown faces in the dining hall. He grows up to be a bright, hardworking boy. In high school, he's accepted into a program for free classes at the local college. To get there, he hitches a ride, but it turns out the car is stolen (which leads to a wrongful conviction for car theft).

In Part II, Elwood is sent to the Nickel Academy, a segregated reform school for boys. Elwood make friends with a street-smart boy named Turner. When Elwood gets a severe beating by the staff, Turner tells him he's lucky, since some boys never come back after their punishments, which are held in a small white shack. Turner also gives Elwood advice on how to survive Nickel, and he helps to get Elwood assigned to daily task nicknamed "Community Service". In Community Service, they discreetly sell off supplies and food allocated for the benefit of the Nickel boys, so the staff can pocket the cash. But it allows Elwood and Turner to have a degree of freedom. Elwood keeps a secret record of their deliveries.

Part III opens with a quick flash forward to Elwood many years later as a young man starting up a moving company in New York. (Switching back to 1962, Elwood and Turner daydream about escaping, but they all know of an infamous Nickel escapee, Clayton, who was caught, sent to the shack and never returned.) In another flash-forward, Elwood is a grown man and his business is growing with a fleet of trucks and employees. He runs into Chickee, a former Nickel boy, who asks him what happened to the "kid you used to hang around with", but Elwood pretends not to know who he's referring to. (We also learn that Elwood successfully escaped from Nickel.)

Back in 1962, the Nickel Academy is getting a state inspection. Elwood tells Turner about his secret delivery records and says that he's going to give them to the inspector, along with a letter revealing the truth about what's going on at Nickel. Turner angrily tells him not to, saying he's going to get them both killed. However, when the day comes, Turner delivers the letter when Elwood is unable to do so. That night, Elwood is dragged into the shack, beaten and then thrown into a makeshift cell. When Turner overhears that they're going to kill Elwood, he breaks Elwood out, and they run for it. They find bikes and bike for a long time, but a Nickel van catches up to them. Elwood is shot, but Turner escapes.

In the Epilogue, we find out that Turner started using Elwood's name, in his honor, after escaping. (It's implied Elwood died when he was shot, so all the flash forwards are about Turner, not Elwood.) The book picks up where the prologue started, and Turner is headed to Talahassee to speak up about the truth behind the Nickel Academy now that the secret graves where the dead boys were buried have been discovered. He goes to eat at a local restaurant (which unbeknownst to him is the location of the former Richmond Hotel, where Elwood had once hoped to someday see a black person eating).

The Nickel Boys by Colson Whitehead (to be released July 16, 2019) has been one of my most anticipated books of this year. With its lean profile running just over 200 pages and bold red cover, it tells a harrowing story about two boys in a reform school in Jim Crow-era America.

The Nickel Boys opens with the discovery of a secret grave full of buried, unidentified bodies located on the campus of what used to be Nickel Academy, a reform school for troubled juveniles. Where those bodies came from and who they belong to are the questions that initially propel the story forward.

The book then traces the paths of two boys who become friends at Nickel Academy.

Elwood and Turner are each intelligent and industrious in their own way, but their differing life circumstances have given them contrasting outlooks on life. Elwood is trusting and idealistic. He believes whole-heartedly in the message of Dr. King and the promise of a better tomorrow. Turner, meanwhile, is on his second stint at Nickel and is a realist. He is artful and doggedly pragmatic.

To read The Nickel Boys is to be drawn slowly into the horrors of Jim Crow-era America and its muti-faceted history. It’s a time filled with signs of progress, but also deeply entrenched racial inequality. The memories of people in chains remains imprinted in the laws and institutions of the land.

When the book starts, it lures you in with a bright and hopeful tone and only a few mentions at the edges about the harsher realities of life for Elwood. I’m warning you now, do not fall for it. It’s a gradual descent, but the savagery of Nickel Academy runs deep and dark.

There are no gimmicks in The Nickel Boys. The writing is straight-forward and understated, but evocative.

In lieu of gratuitous descriptions of violence, Whitehead lets circumstances speak for themselves. And instead of dramatizing each piece of information like a kicker in a chapter of a cookie-cutter genre thriller, events occur naturally. The slow realizations are often more chilling as they they dawn on you later. When he finally does throw in a legitimate kicker, it’s a punch to the gut.

The book is powerful because the story is solid and insightful. It’s also incisive and tragic and appalling. Each sentence is purposeful, which amplifies their collective impact as the story’s resonance ramps up into a terrible crescendo at the very end.

Lest you are comforted by the fact that Nickel Academy is fictional, Whitehead writes in the acknowledgements that he based The Nickel Boys on a real reform school, the Dozier School For Boys.

Like in the opener of this novel, many of the secrets of Dozier’s horrific past lay in the unmarked graves that were found near its campus. And the New York Times notes that “graves were still being discovered after Whitehead’s novel went to press.”

Similarly, the circumstances that land Elwood in Nickel Academy are borrowed from Jerry Cooper’s experiences with Dozier, as recounted in NPR.

This book made me cry, which upset my dog. She ran under my desk and wouldn’t sit on my lap anymore. That was a bummer. I bribed her with treats to get her to come back, but then she ran off again.

With a number of the last few books I’ve read, I’ve felt very ready for them to be over towards the end. Nickel Boys never wore out its welcome for me, despite its grisly contents. When it ended, I immediately wanted to go back through and skim for details I might have missed the first time through.

If you generally read books about race, you are most likely going to see tons of fantastic reviews about this book and read this book regardless of anything I have to say, so I’ll address this to everyone else.

I would encourage people who don’t often read books about race to give this one a shot. Both in style and substance, The Nickel Boys is such a solid, insightful novel. It’s short and written in a straightforward, but powerful way. You can read this in one afternoon. And while the book is set in the not-so-distant past, the things it has to say about injustice and race and human nature are very much relevant in our still-troubled present.

Is this a book that’s on your reading list? Or if you’ve read it, what did you think? See the Nickel Boys on Amazon.

Read the first pages of The Nickel Boys 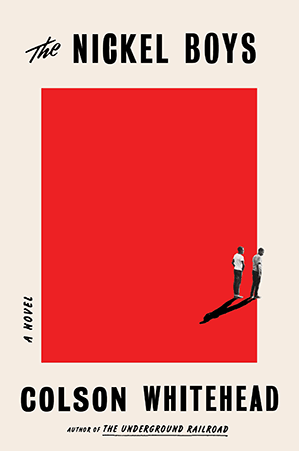 From the Publisher
As the Civil Rights movement begins to reach the black enclave of Frenchtown in segregated Tallahassee, Elwood Curtis takes the words of Dr. Martin Luther King to heart: He is "as good as anyone." Abandoned by his parents, but kept on the straight and narrow by his grandmother, Elwood is about to enroll in the local black college. But for a black boy in the Jim Crow South of the early 1960s, one innocent mistake is enough to destroy the future. Elwood is sentenced to a juvenile reformatory called the Nickel Academy, whose mission statement says it provides "physical, intellectual and moral training" so the delinquent boys in their charge can become "honorable and honest men." In reality, the Nickel Academy is a grotesque chamber of horrors where the sadistic staff beats and sexually abuses the students, corrupt officials and locals steal food and supplies, and any boy who resists is likely to disappear "out back." Stunned to find himself in such a vicious environment, Elwood tries to hold onto Dr. King's ringing assertion "Throw us in jail and we will still love you." His friend Turner thinks Elwood is worse than naive, that the world is crooked, and that the only way to survive is to scheme and avoid trouble. The tension between Elwood's ideals and Turner's skepticism leads to a decision whose repercussions will echo down the decades. Formed in the crucible of the evils Jim Crow wrought, the boys' fates will be determined by what they endured at the Nickel Academy.
Show More
Read an Excerpt
See it on Amazon Book Depository