Book review and synopsis for The Love Hypothesis by Ali Hazelwood, a delightful rom-com about a fake relationship between a biology Ph.D. student and a professor.

In The Love Hypothesis, Olive is a third-year biology Ph.D. candidate who shares a kiss with a handsome stranger in order make her friend think that she's in a relationship. She's horrified when she realizes the "stranger" is Dr. Adam Carlson, a prominent professor in her department who is known for being a hypercritical and moody tyrant.

She and Adam each have reasons for needing to be in a relationship, and they agree to pretend to date for the sake of appearances. Of course, as she gets to know Adam, it's only a matter of time before she starts feeling something for him, and it becomes clear that her little experiment in fake-dating just might combust...

Three years prior, Olive Smith talks to a guy when she's in the bathroom fixing her contacts (and can't see) after her Ph.D. candidate interview. She tells him about her passion for her research. She doesn't catch his name but remembers the conversation distinctly and wonders about the guy she met.

In present day, Olive is a biology Ph.D. student researching early detection methods for pancreatic cancer. She kisses a guy randomly in order to trick her best friend into thinking she's dating someone (so that her best friend Anh won't feel bad about dating Olive's ex). That guy turns out to be Dr. Adam Carlson, a young, handsome and highly-respected tenured faculty member in her department. He's also known for being hypercritical and moody.

Meanwhile, Adam's department chair is worried that he's planning on leaving for another university and has frozen some of his research funds. So, Adam he agrees to pretend to be in a relationship with Olive in order to give the impression he's putting down "roots" here, in hopes they will unfreeze the funds.

As Olive and Adam fake-date, they get to know each other. Olive sees that Adam is demanding and blunt towards his students, but not unkind or mean. Olive confides in him about her mother getting pancreatic cancer, which is why she's doing her research.

Olive soon realizes that she has feelings for Adam, but she's afraid to tell him. When he overhears her talking about a crush, she pretends it's about someone else. Olive also hears someone else refer to a woman Adam's been pining after for years and is surprised at how jealous she feels.

In the meantime, Olive needs more lab space and has been talking to Dr. Tom Benton for a spot at his lab at Harvard. When Tom arrives in town, it turns out he's friends with Adam. Adam and Tom are friends from grad school, and they have recently gotten a large grant for some joint research that Adam is excited about. After Olive completes a report on her research for Tom, he offers her a spot in his lab for the next year.

Olive and Adam's relationship continues to progress until they attend a science conference in Boston. Olive's research has been selected for a panel presentation, while Adam is a keynote speaker. There, Olive is sexually harassed by Tom, who makes advances on her. When she rejects him, he accuses her of someone who sleeps around to get ahead. He also says that he'll deny it if she tells anyone and that they won't believe her.

While Olive does finally sleep with Adam at the conference, she soon tearfully breaks things off since she doesn't want to complicate things with Adam's joint research project with Tom. Adam is also in the process of applying for a spot at Harvard.

Olive is certain no one will believe her about Tom until she realizes that the accidentally recorded the conversation where he made advances and threatened her. Meanwhile, Olive's roommate Malcolm has started seeing Dr. Holden Rodriguez, a faculty member who is a childhood friend of Adam's. Olive and Malcolm turn to Holden for advice, who encourages them to tell Adam about the recording. He points out that he thinks the main reason that Adam is considering a move to Harvard is because Olive is supposed to be going there.

Olive finds Adam and shows him the video. He is incensed at Tom and reports it to their faculty. When Adam returns from Boston, he reports that Tom has been fired. Meanwhile, Olive has been reaching out to other cancer researchers for spots at other labs, and she's gotten promising responses. Olive tells Adam that she loves him and that she never liked anyone else. Adam admits that he remembered her from the day he met her in the bathroom and that she's the one he's been interested in for years.

Ten months later at the anniversary of their first kiss, Olive and Adam re-create the kiss to mark their anniversary.

The Love Hypothesis by Ali Hazelwood came out a few months ago, and I didn’t really pay much attention to it. However, people seem to really be enjoying this book, and after reading The School for Good Mothers, I was really in mood for something light and fun.

In the Love Hypothesis, Olive is a third-year biology Ph.D. student at Stanford who ends up fake-dating a young and handsome tenured professor in her department. All the usual rom-com shenanigans ensue.

The Love Hypothesis is an unapologetically cheesy rom-com novel — with an upbeat attitude, meet cutes, fake-dating tropes, etc. — but it’s also a genuinely fun and often funny book. It hits a lot of familiar notes if you’re familiar with this genre, but somehow Ali Hazelwood has arranged them in a way that ends up being delightful and entertaining.

The book is super melodramatic at parts, uses so many tropes I couldn’t even list them all here if I was inclined to do so and is predictable in the way that rom-coms are always kind of predictable. That all said, I still had a fantastic time reading it and it flew by.

This is a short review because honestly it’s not that complicated to explain that this book is super cheesy and super fun. 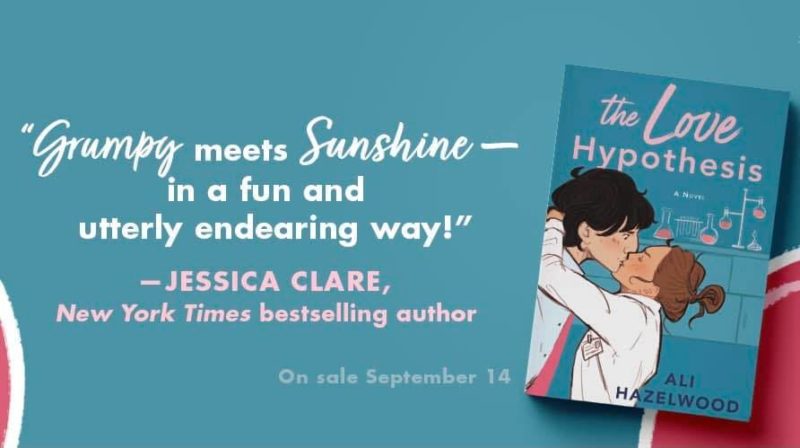 If you like “chick lit” and rom-coms, you should definitely look into this book. I tend to be a little hypercritical of books in this genre, but I really enjoyed The Love Hypothesis. I found myself smiling and chuckling quite a bit as I read it.

This book is a straight-up cheesy rom-com — it is funny, melodramatic and fun as hell. I thought it was great.

See The Love Hypothesis on Amazon.

I listened to about half of this on audiobook. I think the audiobook is solid. The narrator is easy to listen to and does a good job with it.

Hear a sample of The Love Hypothesis audiobook on Libro.fm.

Read the first pages of The Love Hypothesis 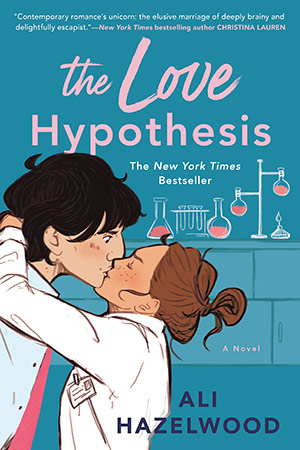 As a third-year Ph.D. candidate, Olive Smith doesn't believe in lasting romantic relationships--but her best friend does, and that's what got her into this situation. Convincing Anh that Olive is dating and well on her way to a happily ever after was always going to take more than hand-wavy Jedi mind tricks: Scientists require proof. So, like any self-respecting biologist, Olive panics and kisses the first man she sees.

That man is none other than Adam Carlsen, a young hotshot professor--and well-known ass. Which is why Olive is positively floored when Stanford's reigning lab tyrant agrees to keep her charade a secret and be her fake boyfriend. But when a big science conference goes haywire, putting Olive's career on the Bunsen burner, Adam surprises her again with his unyielding support and even more unyielding...six-pack abs.

Suddenly their little experiment feels dangerously close to combustion. And Olive discovers that the only thing more complicated than a hypothesis on love is putting her own heart under the microscope.