Book review and synopsis for The Glass Hotel by Emily St. John Mandel, A story about the fallout from a ponzi scheme coming undone.

The Glass Hotel opens with the disappearance of a woman from a container ship. It leads into a story focusing on the fallout from the collapse of a Ponzi scheme, mirroring the Bernie Madiff scandal from 2008.

A work of literary fiction, this narrative looks at the corrupt financier's wife, employees and numerous investors in his fund. It's a story about greed, corruption, guilt and the ghosts that haunt us.

In Part I, the book opens with snippets, indicating that someone has fallen off a ship. In 1999, Paul leaves school after he accidentally gives someone bad drugs, resulting in their death. Distraught, he goes to find his half-sister Vincent. In 2005, Vincent and Paul are working at a luxury hotel, The Hotel Caiette. After a graffiti incident, Paul is asked to leave. Jonathan Alkaitis, a frequent guest and the owner of the hotel property, has a reservation the night the graffiti appears. Years later, Walter, the hotel night manager, learns that Jonathan ended up marrying Vincent.

In 2008, Vincent is 24. Jonathan is 58. Jonathan is a wealthy New York financier, and it brings Vincent into a life of luxury, which lasts from 2005-2008. They are not legally married, but she lives as his trophy wife. Jonathan warns that there is a woman, Ella Kaspersky, who is crazy and has been accusing him of fraud. Vincent befriends Mirella, whose boyfriend is a Saudi prince that invests with Jonathan. A few months before it all comes crashing down, Vincent meets, Olivia is a former painter whose only notable sale was a painting of Jonathan's deceased older brother, Lucas. All of Olivia's money is invested with Jonathan.

In Part II, Jonathan is arrested and sentenced to 170 years in prison in December 2008. There was a meeting where Jonathan had admitted that he was running a Ponzi scheme to his daughter Claire and to Vincent. Afterwards, Claire had alerted the authorities, resulting in Jonathan's arrest. After the arrest, Vincent gets a job bartending and in a kitchen. There's a run-in with Mirella (whose boyfriend Faisal is now dead due to Jonathan's misdeeds). As a result, Vincent quits and in 2013 she joins a ship, the Neptune Cumberland, as an assistant cook. Meanwhile, in prison, Jonathan sees the ghosts of Faisal and Yvette (who had a heart attack as a result of her financial destruction).

Before the arrest, Vincent learns that Paul ended up taking videos she had shot as a kid, adding music and passing them off as his own work. He's been making a living with his video and music performances. She's angry, but realizes that Jonathan wouldn't like her causing drama about it.

Part III starts by re-examining the events leading up to the arrest. Due to turbulence in the financial markets, Jonathan's fake fund was having liquidity problems. The day of his arrest, he announces this to the 17th Floor, the asset management arm, where there were a handful of people whose work help to perpetuate the fraud. On the 18th Floor, the brokerage arm, the firm operates as a normal, legit broker-dealer. When Jonathan announces the liquidity issue, everyone on 17 freaks out. Enrico books a flight to Mexico and leaves. Harvey begins writing a confession. Simone, a new secretary, is asked to start shredding papers. Jonathan is arrested that night, and the others are soon arrested as well.

A decade later in 2018, Vincent falls overboard the Neptune Cumberland. Leon Prevant, who has been struggling financially since his savings were wiped out by Jonathan, is asked to investigate as a consultant. Michael Saparelli, from the security office, investigates as well. There's some indications that it was Geoffrey, a guy Vincent was dating. However, Saparelli tells Leon that it's better to write reports that don't result in people getting fired if he wants more consulting work. Leon doesn't mention it in his report, but he still doesn't get additional consulting work.

In prison, Jonathan sees Olivia's ghost and soon learns that Olivia is dead, too. Meanwhile, Ella turns out to be the one who had asked Paul to graffiti a threatening message for Alkaitis to see that night in 2005. Ella had been approached years ago by Jonathan and had recognized that something fraudulent was going on. She had tried to alert the SEC to no avail. The hotel is closed after Jonathan's arrest. Walter, the night manager, stays on as the caretaker for the empty property. Years pass and the rest of Floor 17 serve their time and are released. One of them, Oskar, ends up back in prison on a drug charge.

The book closes with Vincent falling off the ship. She sees the ghost of Olivia, which causes her to drop her video camera and reach in after it, resulting in her fall. Vincent sees a snippets of things as she falls, including Paul who recognizes that she's a ghost. He apologizes for stealing from her, but Vincent admits she's a thief too, because she had known on some level that there was some type of malfeasance going on with Jonathan's fund. It ends with Vincent finding her mother, who died in an accident when Vincent was 13.

Unfortunately, while Mandel’s writing is still quite good, it was a bit of a let down for me. I started it a while ago and wasn’t sure if I was going to continue, but went ahead and finished it this week.

Instead of the apocalyptic collapse brought upon by her fictional Georgia Flu in Station Eleven, The Glass Hotel exists in an alternate reality and focuses on a different type of societal collapse, in the form of the financial crisis of 2008. More specifically, it explores the ripple effect of a Ponzi scheme that’s fallen apart, mirroring the Bernie Madoff scandal which came undone also in 2008.

The corrupt financier of The Glass Hotel is Jonathan Alkaitis. Through the narrative, we get to know his wife Vincent, his employees and various investors in his fund.

I read quite a few reviews of this book before jumping into it, and I concluded that the negative ones were mainly from people who weren’t interested in reading a story about the financial crisis. As someone who would happily read about that topic, I really expected to like this book a lot more than I did.

To be clear, this is not a deep dive into the financial crisis, so I wouldn’t let that scare you away from it. If you know what a “Ponzi scheme” is and understand what “liquidity” is, that’s about all the information you need going into this. In terms of how in-depth it goes, I’d say it’s about on par with what you’d get from your average newspaper article.

Instead, the bigger issue from The Glass Hotel is that it was kind of a mish-mash of not fully explored themes and not fully explored stories. And for most of the the book, there’s no real driving force to the plot. Instead, it introduces some interesting characters and you keep reading on because Mandel is a good writer and you hope that her story is going somewhere.

It jumps from topic to topic — memory, money, greed, corruption, survival, guilt, the ghosts that haunt us, etc. — competently, but never becoming greater than the sum of its parts.

I think intersections between characters work when it makes you think “oh that makes perfect sense that they would come across each other!” as opposed to when it’s a product of pure chance that makes you think “there’s no way those circumstances would just happen to come together like that”.

In the end, it’s the ghosts and guilt that tenuously bind this story together, but again it only sort of works. Neither of those things are really prominent parts of the book. They’re brought up and act as the binding to patch the story together, but it only feels important in an ephemeral way, since there’s not really the substance there for it to linger in your mind.

Finally, I’m sad to say this because really like Emily St. John Mandel’s writing, but this is also sort of a joyless, dreary story. It’s mostly a lot of cowardly, uninspiring characters resigning themselves to their weaker or worst selves.

I listened to most of this on audiobook. It’s pretty good. The accents aren’t great, but luckily there are only a few of them.

I really wanted to like this book, and I thought the writing was lovely, but it just didn’t come together for me. It’s dreary and all over the place. It kept feeling like it was grasping at poignancy, but not really getting anywhere. It jumps from topic to topic — memory, money, greed, corruption, survival, guilt, ghosts, etc. — offering some reflection on each, but doesn’t seem to address any of them in a fully satisfying way.

I think fans of Emily St. John Mandel may still enjoy the book, but I would be surprised if anyone liked it more than Station Eleven. If you haven’t read that, definitely start with that.

See The Glass Hotel on Amazon.

Read the first pages of The Glass Hotel 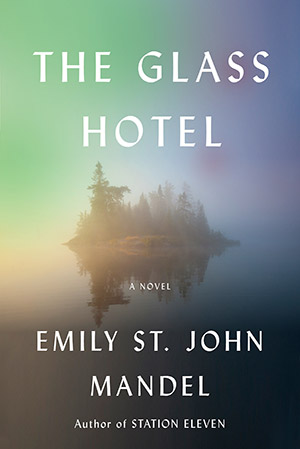 From the Publisher
Vincent is a bartender at the Hotel Caiette, a five-star lodging on the northernmost tip of Vancouver Island. On the night she meets Jonathan Alkaitis, a hooded figure scrawls a message on the lobby's glass wall: "Why don't you swallow broken glass." High above Manhattan, a greater crime is committed: Alkaitis is running an international Ponzi scheme, moving imaginary sums of money through clients' accounts. When the financial empire collapses, it obliterates countless fortunes and devastates lives. Vincent, who had been posing as Jonathan's wife, walks away into the night. Years later, a victim of the fraud is hired to investigate a strange occurrence: a woman has seemingly vanished from the deck of a container ship between ports of call. In this captivating story of crisis and survival, Emily St. John Mandel takes readers through often hidden landscapes: campgrounds for the near-homeless, underground electronica clubs, the business of international shipping, service in luxury hotels, and life in a federal prison. Rife with unexpected beauty, The Glass Hotel is a captivating portrait of greed and guilt, love and delusion, ghosts and unintended consequences, and the infinite ways we search for meaning in our lives.
Show More
Read an Excerpt
See it on Amazon
Share This
social & email
New Reviews
recent releases
New Posts
recently posted
Discussion and Replies