By Karen Thompson Walker, A disappointing novel about an epidemic in a college town

By Jennifer Marie Lin on Jan 7th, 2019 (Last Updated Jun 9th, 2020)
Disclosure: This book was provided by the publisher for review.

Early on in the The Dreamers by Karen Thompson Walker, two college students discuss the Trolley Problem, a very popular thought experiment in ethical decision-making. It’s a scenario (would you kill one person to save five?) that has made its rounds again and again in academics, pop culture and in meme form, sometimes referred to jokingly as “trolleyology” due to how overplayed the topic has gotten.

When The Dreamers presents the topic sincerely without any wink at its triteness, it feels like the book is starting off on shaky, cliched grounds.

It’s a reminder that it’s an entry in the increasingly crowded genre of dystopian epidemics, this time about a sleeping disease that has hit California. And while there’s nothing inherently wrong with writing in a popular genre, it made me wonder if the book would have anything new to say.

In the Dreamers (to be released January 15, 2019), a disease has beset a college in California where people go to sleep but never wake.

As the highly-contagious sleeping disease slips into the general populace, the book follows a number of narrative threads to track the disease’s effects — a young couple with a newborn, two girls and their overprotective father, the college students who are quarantined in their dormitory, and so on.

The premise of the book is reminiscent of her previous novel, The Age of Miracles. They’re both centered around a slowly progressing apocalyptic scenario and seek to explore people’s response to it. Whereas The Age of Miracles focused on one character and told the story from her perspective, The Dreamers has a broader scope.

But, while the wider sweep of The Dreamers could have made it a stronger book, it instead presents the issue of having a book full of partially-formed characters. The Dreamers has more characters, but they aren’t really fully-realized. And instead of using the multiple perspectives to highlight different aspects of the epidemic, the characters each approach the disease in much the same way.

Walker’s writing has a lovely quality to it, where it manages to be vivid without being overly flowery. However, the book is also written with a kind of dreamy detachment which — along with the slowly paced beginning and large cast of characters — made me struggle to get invested in the story.

Half-way through the book, I was still on the fence about whether to finish it. Walker does a good job of highlighting aspects of the sleeping disease that are compelling to consider. I appreciated the quiet drama of never knowing if someone is just sleeping or will never wake up. And while there are a number of intriguing plot developments, I kept waiting for something more.

The book explores the bonds that exist between the characters — what keeps them together or pulls them apart and the strength of their loyalty towards one another. But this theme, like all the other parts of the book, is introduced and sort of just dissipates, without doing much with it.

Without giving anything away, the ending is what finally soured my opinion on the novel. The ending is unexpected, but in the wrong way — it comes up out of the blue without a proper setup in the beginning. The plot events build up throughout the book, but simply fizzle away at the end, with very few explanations of anything. The character arcs end up being incomplete, and thematically, the ending seems disconnected from the majority of the book.

Mostly, I was left wondering what the point of the book was intended to be.

The Dreamers was a disappointing read for me, since I had enjoyed her debut novel and the premise seemed to be full of unrealized potential.

If you primarily read literary fiction and haven’t read much dystopian fiction, I think you might still enjoy parts of this book. However, if you’re well-versed in books with apocalyptic themes, I doubt this book will have much to offer you.

(As a final note, I did like the design of the book cover, though.) Thank you to Random House for the opportunity to review this book. What are your thoughts if you’ve read The Dreamers? Is this on your TBR? 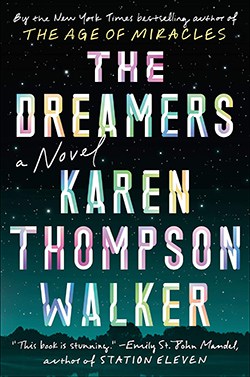 From the Publisher
One night in an isolated college town in the hills of Southern California, a first-year student stumbles into her dorm room, falls asleep—and doesn’t wake up. She sleeps through the morning, into the evening. Her roommate, Mei, cannot rouse her. Neither can the paramedics, nor the perplexed doctors at the hospital. When a second girl falls asleep, and then a third, Mei finds herself thrust together with an eccentric classmate as panic takes hold of the college and spreads to the town. A young couple tries to protect their newborn baby as the once-quiet streets descend into chaos. Two sisters turn to each other for comfort as their survivalist father prepares for disaster. Those affected by the illness, doctors discover, are displaying unusual levels of brain activity, higher than has ever been recorded before. They are dreaming heightened dreams—but of what? Written in luminous prose, The Dreamers is a breathtaking and beautiful novel, startling and provocative, about the possibilities contained within a human life—if only we are awakened to them.
Show More
See it on Amazon Book Depository