Main / Books / The Age of Miracles

The Age of Miracles

By Karen Thompson Walker, A Light Read About a World In Crisis

As Karen Walker Thompson’s The Age of Miracles opens, the world is in the initial stages of “the slowing” — a gradual decline in the speed of its rotation on the Earth’s axis. This is, of course, problematic, and sends our narrator Julia’s life into chaos, along with the rest of the world’s population.

I remember at some point reading a somewhere about this book that the science behind this and the book’s explanation of it was off, which apparently some commenters feel is unforgivable. It doesn’t really bother me, for this type of book, and I don’t really know enough to assess its validity, so moving right along…

The book basically explores how Julia copes with the slowing along with things like first loves and growing apart from her best friend. It’s also a hypothetical reflection on society as it becomes fractured and people manage the situation as the days and nights start to extend, subtlety at first, but they stretch longer and longer until the pretense of normalcy disappears and everyone is forced to rapidly adjust their way of living, albeit in different ways.

It is relatively light fare as far as dystopian novels go, and it focuses more on creative possibilities for coping as opposed to social commentary, though there is a little of that mixed in. I think some people lump this into Young Adult fiction instead of adult literature, and there are difficulties but ultimately it is not a particularly dark or stark vision of the future. I think if you are interested in dipping into something light but not vapid, this is probably a good book to pick up. But if you’re looking for a “meatier” dystopian novel, it is probably not for you. 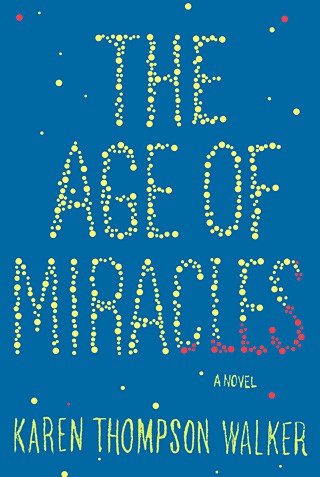 From the Publisher
Spellbinding, haunting, The Age of Miracles is a beautiful novel of catastrophe and survival, growth and change, the story of Julia and her family as they struggle to live in an extraordinary time. On an ordinary Saturday, Julia awakes to discover that something has happened to the rotation of the earth. The days and nights are growing longer and longer, gravity is affected, the birds, the tides, human behavior and cosmic rhythms are thrown into disarray. In a world of danger and loss, Julia faces surprising developments in herself, and her personal world—divisions widening between her parents, strange behavior by Hannah and other friends, the vulnerability of first love, a sense of isolation, and a rebellious new strength. With crystalline prose and the indelible magic of a born storyteller, Karen Thompson Walker gives us a breathtaking story of people finding ways to go on, in an ever-evolving world.
Show More
See it on
Share This
social & email
New Reviews
recent releases
New Posts
recently posted
Discussion and Replies