Main / Books / The Devil in the White City

The Devil in the White City

By Erik Larson, The fascinating story of an architect, a serial killer and the 1893 World Fair in Chicago

When I first moved to Chicago for grad school, we were assigned The Devil in the White City by Erik Larson as recommended summer reading. It was an apt choice — our building is located along the Midway Plaisance which served as the entertainment area for the 1893 World’s Fair featured in the book. According to the maps, we would have been located between Old Vienna and the Moorish Palace.

I was too busy at the time — working full-time and getting ready to move across the country pretty much up until the days before orientation started — and skipped it. As a result, it’s been on my to-be-read list for many years now. There’s been an uptick lately in the level of interest in stories of the true crime variety, so I figured this was a good time to dive in.

The Devil in the White City by Erik Larson tells two interlaced stories of the 1893 World’s Fair in Chicago — that of the chief architect of the fair’s White City and another about a murderer that ran rampant at that time, often considered America’s first serial killer.

The architect, Daniel Hudson Burnham, was already well known, but his construction of the White City would cement his reputation. Around the time the 26-month construction is going on, a handsome doctor going by the name of H. H. Holmes was finishing development of what some nowadays refer to as his “Murder Castle” — a hotel and mansion on a block-long tract of land to the south of Chicago that he engineered to facilitate his misdeeds. 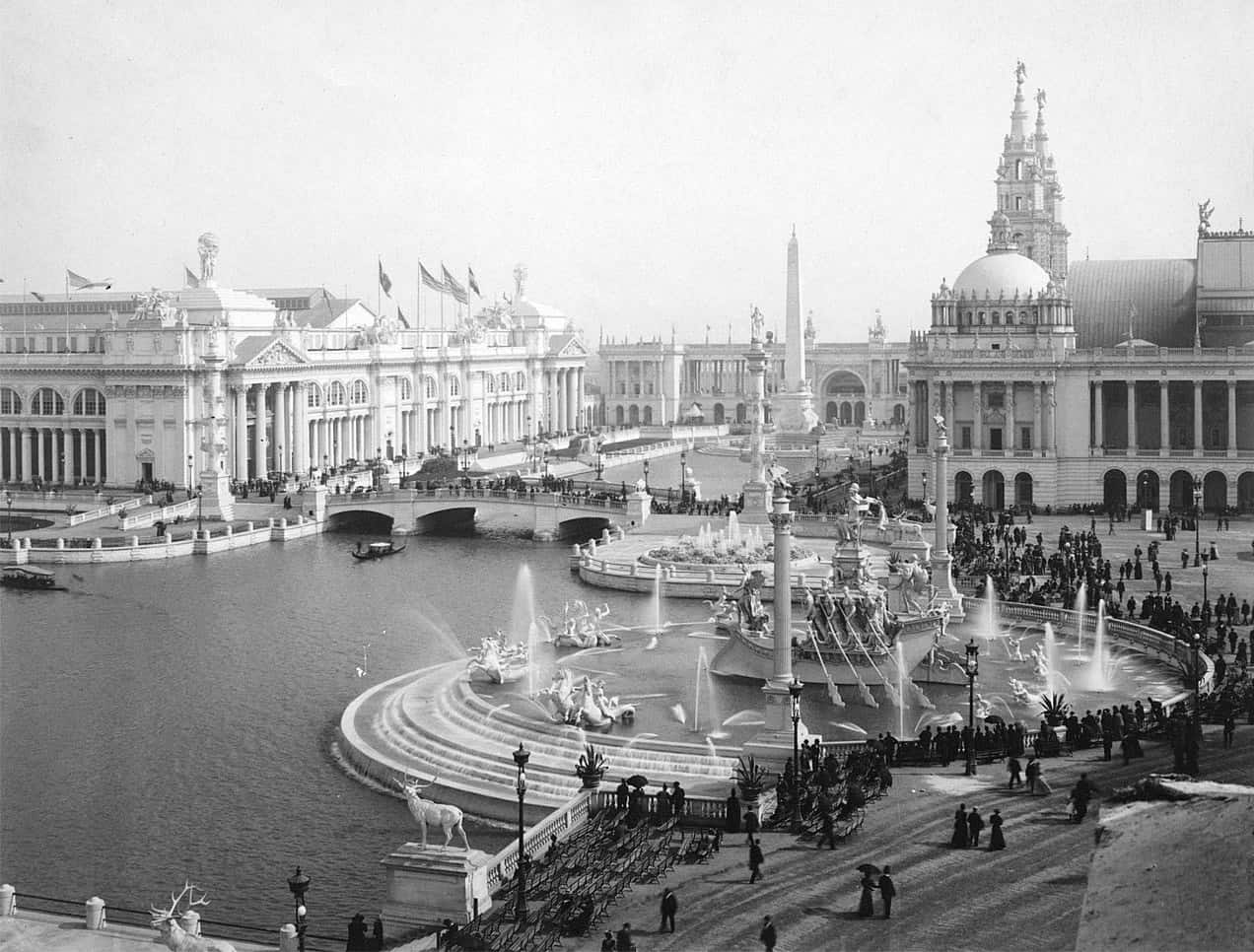 Background Information on the 1893 World’s Fair

For a quick primer, the World’s Fair: Columbian Exposition in Chicago, was a held in 1893 and was billed as a celebration of the 400th anniversary of Columbus’s arrival in the New World. Over the course of the 6 months it was open, it logged 27.5 million visits at a time when the world population was 65 million.

It was a spectacle of innovation and culture, including marvels such as the first voice recording and the introduction of the first Ferris Wheel. Entire villages of people from locales in Egypt and Algeria were brought in to showcase other cultures.

Tesla lighted the streets at a time when lighted streets were rarely seen, and the clean, white gleaming neoclassical buildings provided a awe-inducing vision at a time when cities were known for being dirty industrial areas — hence, the name the “White City”.

World’s Fairs have been held regularly since the mid-1800s, and a number of world attractions were originally built specifically for world’s fairs, including the Eiffel Tower (1889 in Paris) and the Space Needle (1962 in Seattle). The 1893 fair’s construction of the White City in Chicago, which is rumored to have inspired Oz’s Emerald City, and its numerous marvels make it one of the most memorable fairs. 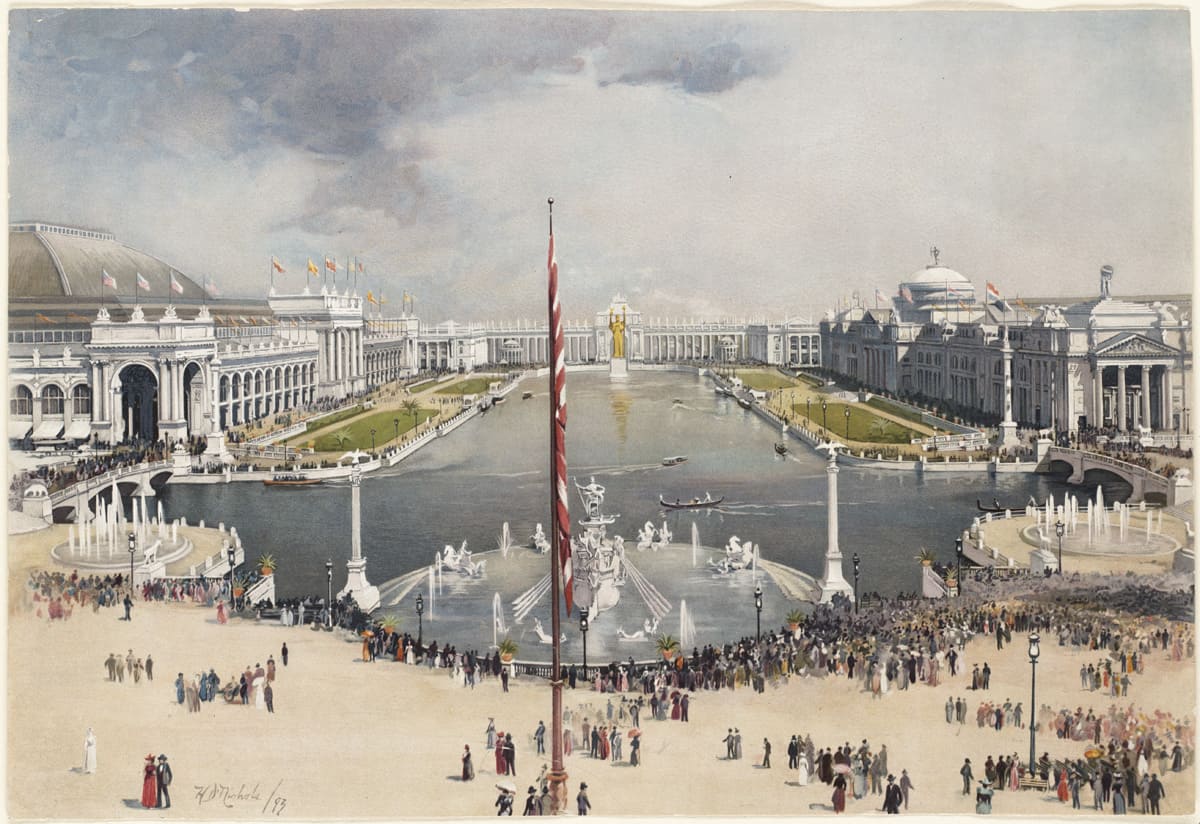 The Devil in the White City is an intriguing, shocking and enthralling recounting of the events of the 1893 World Fair. It’s part history, part true crime and it’s all really interesting. Information about the World’s Fair and its planning and execution plays a larger role in the novel than H. H. Holmes’s story, probably due to the surfeit of information out there about it in comparison to Holmes.

While the same story in less capable hands would probably still be interesting, Larson transports you back to the Guilded Age with a certain ease — he brings forth evocative details and information. Larson’s writing is crisp, and he has a clear intuition for what facts and information are compelling. Larson transforms this tangle of facts and events into a smooth and evenly flowing storyline with aplomb.

Larson also intersperses his chronology of events with nods towards other major events in history occurring at that time which add context to the story. For lovers of historical details and similar curiosities, it’ll be a delightful read full of esoteric asides and satisfying background information, but if you’re expecting this to read like a murder mystery, you might need to tailor your expectations.

It took some time to read, but I found it an enjoyable undertaking. It’s a fascinating story about a fascinating time in history. Electricity is becoming more widespread, the need for water purification is newly being accepted, and the medical profession is still being developed, with schools sending students out to grave rob in order to have subjects to learn from. Meanwile, the Pinkerton National Detective Agency is gaining a reputation for strike-breaking (the agency would also be enlisted to track down H. H. Holmes), both Jack the Ripper and Lizzie Borden’s murders occur around this time, and as a backdrop, a financial crisis is brewing, culminating in the Panic of 1893.

Part of why the story of the 1893 fair is entrancing because it’s about Americans coming together to perform an impossible task in the name of civic duty and pulling it off. As I read it, I thought about the current state of our politics where we can’t get any good legislation passed and our technology where tech companies are too busy selling our data to innovate. I worry that the time for America to do great things has passed.

I only had a few minor gripes: I wish there would have been more indications as to which facts or figures are of questionable accuracy. Plus, there are scenes and conversations that are more speculative than fact mixed in there in order to make the narrative feel more story-like. Instead, almost everything is presented as fact, which in turn made me take everything I was reading with a grain of salt.

Also, Burnham’s obstacles and challenges in getting the White City built on Chicago’s unaccommodating soil and inclement weather consume a large portion of the book, and it gets a tad tedious after a while.

Additionally, the description of the one female architect as having gone “mad” because she cried when being fired seemed a bit sexist. Her Wikipedia article does a better job of explaining what happened with her, but her story is sadly also a good illustration of how smart women get forced out of certain fields.

There’s an adaptation of The Devil in the White City that’s currently in development. The only cast listed is Leonardo DiCaprio as H. H. Holmes. It’s being developed as a series for Hulu (in partnership with Paramount TV), and Leonardo DiCaprio and Martin Scorsese are producing.

The film adaptation of this has been a decade-long process since Leonardo DiCaprio’s production company Appian Way picked up the rights in 2010, but recently (February 2019) it has seen some activity as it switched from being a feature film to a Hulu series. So, clearly he hasn’t given up on the property.

For all the details and a full production timeline, see Everything We Know About the Devil in the White City Hulu Series.

Have you ever gone down a rabbit’s hole of exploring Wikipedia topics? Then this book might be for you.

The Devil in the White City is a book for people with a natural curiosity and lovers of history or true crime or architecture. It is certainly a lot more substantive with a lot more information than your average bestseller, but these facts have been carefully curated and narrated to tell a fascinating story.

I enjoyed this book, pretty much from cover to cover, but I’m also a biased reader of the book. My favorite apartment I ever lived in was in Chicago, in a building originally built across the street from the fair’s Palace of Fine Arts (now the Museum of Science and Industry) as a hotel to meet the fair’s housing needs.

Have you read this, or would you consider reading it? I hope non-Chicagoan readers liked it as much as I did!

From the Publisher
In The Devil in the White City, the smoke, romance, and mystery of the Gilded Age come alive as never before. Two men, each handsome and unusually adept at his chosen work, embodied an element of the great dynamic that characterized America’s rush toward the twentieth century. The architect was Daniel Hudson Burnham, the fair’s brilliant director of works and the builder of many of the country’s most important structures, including the Flatiron Building in New York and Union Station in Washington, D.C. The murderer was Henry H. Holmes, a young doctor who, in a malign parody of the White City, built his “World’s Fair Hotel” just west of the fairgrounds—a torture palace complete with dissection table, gas chamber, and 3,000-degree crematorium. The Devil in the White City draws the reader into a time of magic and majesty, made all the more appealing by a supporting cast of real-life characters, including Buffalo Bill, Theodore Dreiser, Susan B. Anthony, Thomas Edison, Archduke Francis Ferdinand, and others. Erik Larson’s gifts as a storyteller are magnificently displayed in this rich narrative of the master builder, the killer, and the great fair that obsessed them both.
Show More
See it on Amazon
Share This
social & email
New Reviews
recent releases
New Posts
recently posted
Discussion and Replies