Book review and synopsis for Piranesi by Susanna Clarke, an imaginative page-turner set in an alternate reality.

Piranesi by Susanna Clarke is a literary page-turner set an alternate reality. It's about a man, Piranesi, living in a grand labyrinth that is filled with statues, beset by floods and surrounded by celestial objects. Piranesi carefully documents the world around him, including the house's many halls, the tides and the human remains that he finds. But indications of a stranger prompt Piranesi to question what he knows about this world and threatens to reveal the truths buried long ago.

Part I introduces Piranesi, a man who lives in a grand, 3-tiered labyrinth, filled with statues. The lowest level floods continuously, and Piranesi has located the skeletal remains of 13 dead people in the labyrinth. He diligently cares for these remains.

Part II, Piranesi meets with the Other, the only other living person there. The Other believes that the labyrinth contains a Great and Secret Knowledge. Piranesi helps him with this research, but he doesn't really believe in it. Piranesi survives by fishing, gathering seaweed and collecting fresh water from waterfalls. The Other, however, is able to procure things like blankets, shoes, etc. Piranesi also forgets things and loses track of time, but the Other does not. One day, the Other tells Piranesi that someone (who they nickname "16") may show up, but that "16" is their enemy.

In Part III, Piranesi comes across an old man, who he nicknames the Prophet. The Prophet says that this World is created from ideas from a different world. He also says that the Other's real name is "Val Ketterley" and that "16" is looking for Piranesi. (Later, the Other tells Piranesi should not speak to "16" or else he'll go mad.) Afterwards, Piranesi starts reading through the earliest entries in his journal, none of which he remembers writing, and looks up some of the names the Prophet had mentioned. He learns that a man named Laurence Arne-Sayles (who later turns out to be the Prophet) had a group of students, including Val Ketterley, with whom he'd discussed a "grand experiment" -- a different world featuring architecture merged with oceans. Laurence was involved with suspicious disappearances and was eventually arrested for kidnapping a young man, James Ritter. Ritter later describes being kept in a grand, flooded house that was filled with statues for roughly two years.

In Part IV, Piranesi reads more about Laurence from his journal. Laurence believed that any ideas or powers that were lost in one world ended up in a different world, and in the process they created "doorways" one could cross. "16" also starts leaving messages for him written in chalk or in stones. He sees that "16" is a woman and that the Other calls her "Raphael". Piranesi also finds scraps of paper where someone writes about how they are being held here as a prisoner. He later realizes are they were early entries he wrote that were torn from his journal. "16" writes a message asking if he is "Matthew Rose Sorenson", and his journal indicates he had been interested in writing a book about Laurence at one point.

In Part V, Piranesi finds a journal entry talking about how he, Matthew Rose Sorenson, had approached Ketterley with questions about Laurence for his book. Ketterley had offered to show him a ritual to cross through one of these "doorways", and used the opportunity to trap Sorenson/Piranesi there instead.

In Part VI, Piranesi now realizes that the Other/Ketterley is his enemy. During a particularly hard flooding of the House, "16" comes to save him and together they fend off Ketterley. Despite Piranesi's efforts to save him, Ketterley dies in the flood. Afterwards, "16" turns out to be a police officer named Sarah Raphael who has been searching for Sorenson because he's been missing for years.

In Part VII, Sarah convinces Piranesi to return to the normal world with her, even though he considers this House to be his home. He goes to live with Sorenson's family, though he no longer considers himself to be either "Piranesi" or "Matthew Rose Sorenson". Piranesi still goes back to visit the Labyrinth, and he brings James Ritter and Raphael with him sometimes. The book ends with Piranesi reflecting upon the immeasurable beauty and infinite kindness of the House.

Piranesi by Susanna Clarke opens in a disorienting, alternate reality-type setting, with a main character who is submerged in waves in a grand house. The book then proceeds to unravel the mysteries behind this strange place over the next two hundred pages or so.

If you’re into riddles and logic problems, you’ve probably come across a riddle where you’re told a series of statements from people and you’re trying to figure out who’s a truth teller and who is a liar. The beginning of Piranesi sort of reads like an extended, literary version of those types of riddles, with some world-building added in as well.

There’s a puzzle-like feeling as you try to draw conclusions about which of the characters you can trust and what information you can rely upon. Plus, you’ll get a brain-teaser-like satisfaction as you try to shift around your assumptions to see what arrangement of truths and lies make sense.

As the story continues and it untangles the mysteries of this strange place, the book takes on more of a sci-fi thriller feel, which is perhaps less fun intellectually, but still entertaining nonetheless. The point of view of Piranesi also offers a refreshing perspective on his surroundings. Trusting, respectful and guileless, his narration serves as a loving and peaceful guide through the ins and outs of this labyrinth, which I found to be a pleasant way to spend a few hours.

When I started the book, I found it a little difficult to orient myself to what was going on, so I assumed it was going to be a dense little novel. However, Piranesi actually turned out to be quite a quick read and almost a page-turner. So, if you’re feeling intimidated by the strange setting in the first chapter, I’d encourage you to keep reading since a lot of questions begin to get answered pretty quickly.

Where Piranesi is a bit lacking, is when it comes to things like having fleshed out characters or a more fully explained world. Clarke eschews trying to build up fully developed characters and backstories. Instead, she takes a more focused approach to her storytelling, offering only scant outlines of characters. She has a specific premise that she’s looking to explore and doesn’t really deviate from that.

Similarly, the world-building felt a little thin to me. There’s a lot of stuff that sounds like it’ll have an intriguing explanation when it’s first introduced, but ends up being left unexplained, which was disappointing for me.

Overall, the book is a fun and interesting little mysterious story which is satisfying to unravel. It’s the type of book that will appeal to people who enjoy high-concept stories (stuff that’s based on a really specific idea or premise and then explores that) and riddles.

In Piranesi, Clarke only offers brief sketches of characters, just enough to propel her premise forward, so there’s a distinct lack of fully developed characters and backstories and the emotional impact that comes with that. In some ways, it felt more like an extended short story or novella to me. I also wished that the world-building in this book had been a little more fully realized.

Of course, I imagine some people will really like the streamlined feel of the story. Piranesi’s hopeful and trusting tone also make him a nice companion to have through the story. It’s a very quick read, especially as far as literary novels go, so if you’re curious about it, it’s probably worth giving it a shot.

What do you think? Have you read this book or is it something you’d consider reading? See Piranesi on Amazon.

Read the first pages of Piranesi 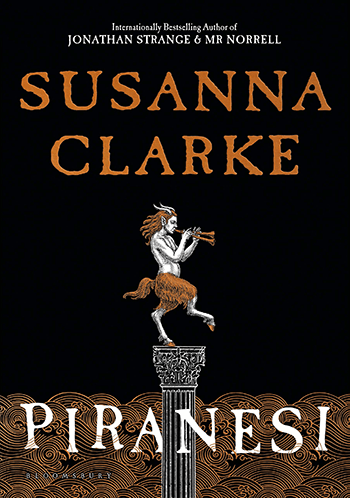 From the Publisher
Piranesi's house is no ordinary building: its rooms are infinite, its corridors endless, its walls are lined with thousands upon thousands of statues, each one different from all the others. Within the labyrinth of halls an ocean is imprisoned; waves thunder up staircases, rooms are flooded in an instant. But Piranesi is not afraid; he understands the tides as he understands the pattern of the labyrinth itself. He lives to explore the house. There is one other person in the house-a man called The Other, who visits Piranesi twice a week and asks for help with research into A Great and Secret Knowledge. But as Piranesi explores, evidence emerges of another person, and a terrible truth begins to unravel, revealing a world beyond the one Piranesi has always known.
Show More
Read an Excerpt
See it on Amazon
Share This
social & email
New Reviews
recent releases
New Posts
recently posted
Discussion and Replies