People We Meet on Vacation

Book review and synopsis for People We Meet on Vacation by Emily Henry, an upbeat and breezy romance about two best friends who travel together each summer.

In the People We Meet on Vacation, Poppy and Alex are best friends from college who have travelled together each summer for the last decade. But two years ago there was a rift in their friendship, and they haven't spoken since.

With Poppy feeling dissatisfied in life despite having her dream job, she reaches back out to Alex. They agree to go on one more trip, and Poppy is determined to finally set things right.

Section-by-Section SummarySee the Section-by-Section Summary of People We Meet on VacationQuick Plot Summary
The one-paragraph version: Poppy is a travel-blogger-turned-travel-journalist. She does a summer trip each year with her best friend from college, Alex. As the book recounts their trips over the years, Poppy realizes she loves Alex, but they want different things (him - stability; her - spontaneity and adventure). Their friendship stalls when they finally kiss. In present day, they reconnect and take a trip together to Palm Springs. They end up having sex. They part with Poppy needing to figure out what she wants. She eventually realizes what she really wanted all along was to feel less lonely, and that she feels that way when she's with Alex. They get together, he moves to New York and she quits her travel journalism job to write a local column called "People You Meet in New York".

The book opens five summers ago, with Poppy Wright, a travel blogger, on vacation with her best friend Alex Nilson, a high school literature teacher, on Sanibel Island.

In present day, Poppy is now working as travel journalist for an upscale travel magazine, Rest + Relaxation. The last time she'd traveled with Alex was two years ago to Croatia, and there has been a rift in their friendship since then. Her current best friend, Rachel, encourages her to reach out to Alex.

From there, the book jumps back and forth between the past and present. It describes how Poppy and Alex met as freshmen at the University of Chicago, twelve years ago. They ended up carpooling home at the end of the year because they're both from Linfield, Ohio. They're fairly different people -- Poppy had been bullied growing up, while Alex was not, Poppy's family is loud and weird, while Alex was raised by a single father -- but they hit it off. Their sophomore year, they take two classes together and go to Vancouver Island together that summer. While they're there, Poppy decides she wants to find a way to travel for a living, and Alex offers to join her for trips during the summer.

In present day, Poppy texts with Alex to try to re-connect. Alex has plans to go to his younger brother's wedding in Palm Springs, and invites Poppy to join him there. Soon, they reunite in Palm Springs for the first time in two years. Poppy pays for the trip out of pocket, but lets Alex think that her magazine is footing the bill.

As the book flashes back to their past summers, it details their early trips to Nashville, San Francisco, New Orleans, Vail etc. Poppy and Alex slowly realize how much they mean to each other, and how they feel less lonely with one another. They realize they love each other (as friends). Meanwhile, Alex re-connects with Sarah, his college crush, and they start dating. Then, five summers ago on Sanibel Island, Alex had recently been dumped by Sarah. The last day on that trip, Poppy finally realized she was in love with Alex.

In present day, their Palm Springs trip is not going as planned; their studio rental is terrible with malfunctioning air conditioning, and the pull-out chair gives Alex a back spasm. Their plans don't pan out, and they end up with a flat tire. Poppy also finds herself feeling attracted to Alex.

In more flashbacks, four summers ago, Poppy had gotten sick before the trip and Alex had skipped going to Norway and Sweden to take care of her. Poppy found herself thing about how much she loved Alex, but she also realized that he wanted more stability in life, whereas she craved spontaneity and adventure. Then, flashing back to three summers ago, Poppy and Alex had planned a couples trip to Tuscany with Sarah (who Alex had gotten back together with) and Trey (Poppy's new boyfriend). Soon after, Alex and Sarah had broken up again, as did Poppy and Trey.

In present day, with things reaching a fever pitch in the oppressive heat, suddenly it starts to rain, and in the relief of it, they start kissing and have sex. They profess their love for one another, and they attend Alex's brother's wedding together, holding hands. However, before they part, they talk about how Poppy still doesn't know if marriage, kids and stability is what she wants, and Alex tells her she needs to figure it out.

In a flashback to two summers ago in Croatia, they'd finally drunkenly kissed, but Alex had stopped things from going further. Poppy had taken it as a rejection.

In present day, Poppy realizes Alex hadn't really rejected her, he'd simply wanted them to get together in a way that wasn't a drunken whim. Poppy ends up going to therapy for a while to try to figure out what she wants. Finally, she goes back to Linfield to find Alex. She tells him she spent her childhood in Linfield feeling lonely, thinking meeting different people traveling would make her feel less lonely, but it turns out the thing that makes her feel no longer alone is Alex.

In the Epilogue, they are now together and living in New York. Alex has found a teaching job, and Poppy has left her job at the magazine to write a column called People You Meet in New York.

People We Meet on Vacation is the newest summer read by Emily Henry, who previously published the bestselling novel Beach Read.

I was looking for something appropriately light and fun to listen to for a mini road trip down to Los Angeles, so I picked this one up. It turned out to be an appropriate book for this trip since one of the protagonists is named Alex and went to UChicago, and I happened to visiting my friend named Alex who went to UChicago, yay!

At any rate, the protagonists, Alex and Poppy, used to be best friends, but have grown apart when the book starts. The story is then told in a series of flashback, tracing their friendship over the years while progressing in present day as they attempt to re-connect and repair their fragile relationship.

Here, Emily Henry’s writing is capable and confident, and it’s a cute story overall, often humorous in tone. The premise of the two protagonists going on a bunch of summer vacations together gives the story its structure. In general, the book is breezy, with some tender moments and of course some romantic tension between the two.

If you like stories about relationships evolving over the years (like One Day by David Nicholls which most people know from the Anne Hathaway movie), People We Meet on Vacation is sort of one of those books, but sort of not. I tend to like those types of stories, since I find it enjoyable to read about how the characters’ relationship and lives have evolved over time, but here the characters’ lives don’t really change very much over time. Still, there’s some semblance of that type of story since it takes place over a 12 year period.

While upbeat and cute, this story is perhaps less exciting than some romance novels. The dramatic element in the story is very toned down. If you like really torrid romances and star-crossed lovers, you might find this book a bit bland. Instead, this book is more about two people who care about each other and exploring the ins and outs of their relationship.

There’s definitely some contrivances in their relationship for the sake of stretching out the plot over the 12 year timeframe of the book, but whatever. Towards the end, especially though, it did drag a little for me, since it doesn’t quite maintain the tension you want to keep things interesting.

Also, with the romance-slash-chick-lit genre in particular, I think there’s always going to be some degree of subjectivity in what people find attractive or romantic. Some parts of this book worked for me, others … less so.

For example, in the book, the author keeps referring to this “sad puppy face” that Alex (the male protagonist) makes that apparently Poppy finds very endearing, but to me that sounds so annoying. I knew a guy who used to do that, and it irritates me now even thinking about it. So, your mileage may differ.

For a very light, breezy, fun and romantic-type read, People We Meet on Vacation is a cutesy best-friends-who-may-or-may-not-want-to-bone (a.k.a. friends-to-lovers-maybe) type of story.

It’s a low-key narrative, devoid of any torrid drama, so I imagine some might find it a little bland while others will like it for that reason.

For me, this was a good fit for an audiobook to listen to while cruising down the California coast. I’d recommend this for some solo reading if you’re looking for a light-hearted diversion.

See People We Meet on Vacation on Amazon.

Hear a sample of the People We Meet on Vacation audiobook on Libro.fm.

Read the first pages of People We Meet on Vacation 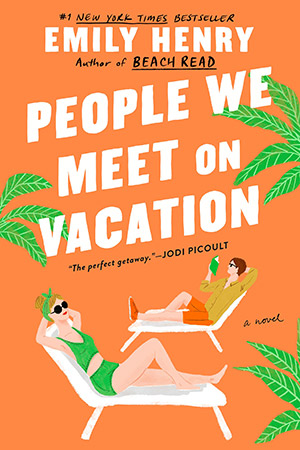 Poppy and Alex. Alex and Poppy. They have nothing in common. She’s a wild child; he wears khakis. She has insatiable wanderlust; he prefers to stay home with a book. And somehow, ever since a fateful car share home from college many years ago, they are the very best of friends. For most of the year they live far apart—she’s in New York City, and he’s in their small hometown—but every summer, for a decade, they have taken one glorious week of vacation together.

Until two years ago, when they ruined everything. They haven’t spoken since.

Poppy has everything she should want, but she’s stuck in a rut. When someone asks when she was last truly happy, she knows, without a doubt, it was on that ill-fated, final trip with Alex. And so, she decides to convince her best friend to take one more vacation together—lay everything on the table, make it all right. Miraculously, he agrees.

Now she has a week to fix everything. If only she can get around the one big truth that has always stood quietly in the middle of their seemingly perfect relationship. What could possibly go wrong?