Book review and synopsis for Local Woman Missing by Mary Kubica, a domestic mystery-thriller about a series of missing women and a missing girl who has reappeared.

Local Woman Missing opens with a girl, Delilah, who disappeared 11 years ago finally being found again. With her return, it reopens questions about what happened the day she and her mother went missing and another woman, Shelby Tebow, who had disappeared soon before that.

In this thrilling and carefully plotted domestic mystery, this community and these families must unravel the secrets of the chilling events from many years ago ...

The one-paragraph version: 11 years ago, Shelby Tebow went missing and ten days later a neighbor (Meredith Dickey) and her child (Delilah Dickey) disappeared as well. In present day, Delilah has returned, unrecognizable with acid burns, after escaping the couple that abducted her. We also learn that Shelby's body was eventually found, and her husband Jason was arrested for her murder. Meredith later committed suicide. Kate and Bea, two of their neighbors, helped with the search for Meredith. In the end, we find out that "Delilah" is not actually Delilah. She's another abducted girl who was brainwashed into thinking she is Delilah (whose disappearance was well-publicized). Meanwhile, it turns out that Bea had been driving home drunk (with Meredith in the car) and ended hitting Shelby. They got rid of the body, and Bea framed Jason. However, Meredith couldn't live with the lie and insisted on going to the police. As a result, Bea killed her and made it look like a suicide. Delilah saw Bea attack Meredith, so Bea locked Delilah away. In present day, the police find the real Delilah locked up in the attic above Bea's soundproofed music studio.

Local Woman Missing jumps back and forth between multiple timelines. It opens 11 years prior with Shelby Tebow leaving the house at night to cheat on her husband, which she has done many times before. On the road, she spots a car coming towards her. The book soon reveals that 10 days later, another woman from that neighborhood (Meredith Dickey) and her child (Delilah Dickey) went missing as well.

In present day, Delilah manages to escape the dark basement that she's been captive in along with another boy, Gus. However, Gus is recaptured in the process. She rejoins her family which consists of her father Josh and her brother Leo, though they can barely recognize her because she's emaciated and scarred with acid burns. She doesn't have much of a memory of her capture since she was only six at the time. So, it's unknown that exactly happened to them all those years ago, but Meredith ended up committing suicide.

Through flashbacks, we learn that Shelby's (unclothed) body eventually was found, with her husband Jason as the primary suspect. Meanwhile, Jason thinks Shelby's obstetrician, Dr. Feingold, might be responsible. Two neighbors, Kate and Bea, who were friends with Meredith and Josh end up helping to investigate. They learn that Jason and Shelby were in the process for suing Dr. Feingold for malpractice after his birthing procedures led to a brain injury for their baby, Grace.

In present day, Delilah struggles with assimilating with her family. There's also a lot of media attention surrounding her return. She soon tells her father about the other captive boy, Gus. Quickly, the police track down the place Delilah was held captive (and physically and sexually abused) by a couple who turn out to be, Eddie and Martha Cutter of Michael, Illinois. However, Gus isn't there, and the couple has clearly fled.

Flashing back to 11 years ago, Kate and Bea also learn that Meredith had been Shelby's doula (helps with the birthing process) and had offered to testify in the malpractice suit against Dr. Feingold. Still, when Shelby's bloody clothes are found in a dumpster at Jason's workplace, Jason is arrested.

Meanwhile, Meredith had been getting threatening messages prior to her disappearance. She'd also noticed that Leo, 4 at the time, had been reluctant to go to the babysitter's house and came back with a bruise one day. Meredith eventually finds out that her friend Cassandra was responsible for the threatening messages she was getting (because Cassandra had learned that Meredith had a romantic history with her husband, Marty). And the Leo situation turns out to be a bully at the babysitter's place.

In present day, Josh takes Delilah to a hypnotist to try to jog any memories that might help them locate Gus. This leads to the revelation that Gus is only a figment of her imagination. Stuck in the dark for years, her mind created him to keep her sane.

Flashing back to 11 years ago, soon after Meredith disappeared, her body was found in a motel and it's determined to be a suicide. There's also a note saying Delilah is fine and not to go looking for her.

In present day, a childhood playmate of Delilah's, Piper Hanaka, points out to Leo that Delilah used to have a cleft chin but she no longer has one now, and it's not the type of thing that disappears over time. They soon establish that "Delilah" is not really Delilah. Instead, the police officer, Carmen (who has been working with the family on this case for many years), lied about the DNA results because she couldn't stand to see Josh disappointed once again. "Delilah" turns out to be another missing girl, Carly Byrd, who was convinced by the couple that she was Delilah Dickey (because they liked idea of the notoriety associated with Delilah's highly publicized disappearance).

Another flashback shows Meredith planning a night out with Josh where they run into Bea and Kate. They party together, but Josh and Kate eventually leave. Later, Bea and Meredith head home, drunk. Bea is driving and she hits Shelby. Meredith wants to turn herself in, but Bea reminds her that this will ruin her relationship with Josh. They end up getting rid of the body. Bea undresses the body, hoping it will prompt the police to focus on male suspects if they find it,

In present day, Carly is packing her things to leave when she runs off. The police search the neighborhood to see if she's hiding somewhere. When they try to search Bea and Kate's garage (which Bea uses as a music studio), Bea runs off as well. They end up discovering the real Delilah there, where Bea has been keeping her captive.

It turns out that when Meredith learned that Bea had framed Jason for the murders (by planting the bloody clothes), she had insisted on going to the police with the truth. As a result, Bea attacked her, took her to a motel, demanded she write a suicide note and killed her, making it look like a suicide. Delilah had seen Bea attack Meredith, so Bea has been hiding her in the attic space above the garage/studio, which is soundproofed, for the last eleven years.

In the end, the police track down Carly, and Eddie and Martha Cutter eventually return to their home and are arrested. A few days later, Bea is arrested trying to buy a fake ID. Jason Tebow is released from prison.

Local Woman Missing by Mary Kubica wasn’t on my radar when it was first released, but it’s been getting some solid reviews, so I thought I’d check it out. I’ve been meaning to read something by her anyway.

As I started reading, I was very intrigued by the premise of this mystery-thriller. Eleven years ago, there were a series of two disappearances, one involving a young housewife and the other involving a mother and her young daughter, Delilah. In present day, Delilah has been found. The question remains, however, of whether the disappearances were connected. The book then goes back and forth between three timelines to tell its story.

There is a lot going on in this book with all of the characters dealing with the fallout and investigation into the multiple missing persons as well as a lot of personal and interpersonal dramas that may or may not have played a part in those disappearances. Kubica manages all these storylines and plotlines deftly, somehow bringing it all together into a cohesive story that feels well-paced and with a narrative that flows smoothly.

The plotting of the story was strong enough that I eagerly plowed through this book. I ended up getting through Local Woman Missing in less than a day, reading parts of it and audiobook-ing parts of it as I did some packing for an upcoming trip. (In case anyone cares, I’m going home to Texas since I haven’t been back in two years!)

Overall, Local Woman Missing made for a quick and engrossing read.

Without spoiling anything though, I will say that the resolution of the novel is less clever than the buildup of the plot would imply. It ends up resolving the novel with somewhat far-fetched occurrences, and it strains credulity that they would happen to collide in the way they do.

I was pretty enthusiastic about this book as I read it, and Kubica does manages to tie off most loose ends. However, she does it in a way that seems a little incredulous, even for a mystery-thriller. It doesn’t help that there’s a number of implausible things in the novel that I was fine with ignoring as I read it, but when the ending turned things up another few notches on the “oh, come on, are you kidding me?” scale, I felt like I had to mention it here.

I struggled with how to rate this book, since I do think Kubica does a really solid job of building up her narrative and presenting it in a way that’s quite engrossing. Unfortunately, the ending is so critical for mystery-thriller novel, and I don’t think it really stands up to scrutiny. So, it’s tricky for me to decide whether to recommend this book, one way or another.

If you don’t mind a rather incredulous ending, Local Woman Missing is a mystery-thriller that should easily capture your interest as you read it. That said, anyone who is even mildly critical of books and thrillers can pick apart various parts of this book pretty easily. If that’s a deal-breaker for you, then perhaps skip this book. I still managed to enjoy it, even after noticing some of its flaws.

Based on this novel, I would consider reading another book by this author in the future (though I’ll probably wait to see if early reviewers think the ending is solid).

The audiobook for Local Woman Missing is uneven, but serviceable. I liked the narrators for Delilah and Kate, though I found the ones for Meredith and Leo to be a bit overwrought.

Still, I managed to listen to the audiobook for most of the book, so it did the job well enough I suppose.

Hear a sample of the Local Woman Missing audiobook on Libro.fm. 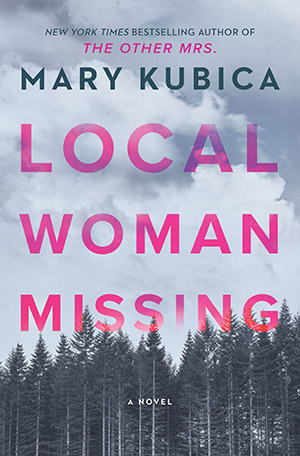 Shelby Tebow is the first to go missing. Not long after, Meredith Dickey and her six-year-old daughter, Delilah, vanish just blocks away from where Shelby was last seen, striking fear into their once-peaceful community. Are these incidents connected? After an elusive search that yields more questions than answers, the case eventually goes cold.

Now, 11 years later, Delilah shockingly returns. Everyone wants to know what happened to her, but no one is prepared for what they'll find....