Johnny Truant, a drug-addicted tattooist, finds a manuscript about a possibly fictional documentary called The Navidson Records. In it, Will Navidson moves his family — him, his wife and two young children — into a house in the suburbs, but discovers a door that leads to a dark hallway and, from there, a shifting, dark labyrinth hidden inside. Navidson’s attempts to explore and document the house’s inexplicable interior are what result in the Navidson Records.

In this disorienting horror story where the perspective the narrators in constant flux, it’s never clear what can be relied upon, much like the shifting walls of the house that the story is constructed around. House of Leaves, which was originally published over 15 years ago (in March 2000), lobs at you amplified versions of pretty much every post-modernist writing device, used to extreme excess. The xkcd parody, House of Pancakes, is pretty spot-on. It’s highly fragmented, with layers upon layers of metafiction, told by a series of nested unreliable narrators, littered with faux academic discussion and encoded messages, blends a touch of non-fiction, and accented with footnotes (there are always footnotes in these types of books, aren’t there?). Oh and a quick flip through the book will show that the typesetting is far from traditional. An absolute treasure trove for post-modernist literary academics and obsessive over-analyzing types.

I spent many nights huddled in a corner of a Starbucks reading this book, and to be honest, I was genuinely, maybe not scared exactly, but certainly on edge reading this book. For the most part, I focused my attention on the more coherent main narrative of the Navidson house — an ill-fated exploration that slowly descends into terror and psychological horror as the family attempts to measure, mark or otherwise moor their understanding of the labyrinth on more stable terms. I found it easy to get lost in those shifting hallways and winding staircases.

As for the metafiction built around it, I let most of the (more disorienting) details about Johnny and his neighbor and mentally ill mother and the provenance of the manuscript and other details go by without too much thought. Doubtless, fans of the novel will consider that sacrilege. It’s never clear which characters are real or fake or lying or a product of Johnny’s imagination or of mental illness or a representation of something else. While inventive, trying to get a hold of a story that is obviously not meant to be entirely understood and one that intentionally asks questions that can’t be answered is not something I could really get into, though I realize it’s probably a matter of personal preference as opposed to an objective flaw. You’ll find plenty of people online who’ve been interested enough to try to wade through it and argue endlessly over which interpretation of events is “accurate.”

The even more meta stuff, for example a section which paragraphs lengths (short-short-short-long-long-long-short-short-short) “spell out” SOS in morse code and each instance of the word “House” is printed in blue, I can’t even pretend to appreciate. Some people find these discoveries and details delightful; my response is usually “so what?”

I read this quite some time ago, but it stuck with me. Of course, I found it too gimmicky, with all the bells and whistles that often eclipse the story itself, so I knew I’d be unlikely to pick up another Mark Danielewski novel again. Still, if you like that sort of thing or you want to test out taking a deep dive into very post-modernist fiction, House of Leaves is a good bet. Even if you end up not being a fan of all the meta stuff (like me), there’s a strong enough story in there that it’s worth giving it a shot.

And just because this is a topic that comes up a lot, here’s Everything We Know About A House of Leaves Film Adaptation. 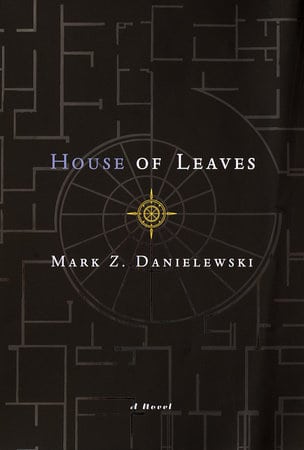 From the Publisher
Years ago, when House of Leaves was first being passed around, it was nothing more than a badly bundled heap of paper, parts of which would occasionally surface on the Internet. No one could have anticipated the small but devoted following this terrifying story would soon command.
Now, for the first time, this astonishing novel is made available in book form, complete with the original colored words, vertical footnotes, and newly added second and third appendices.
The story remains unchanged, focusing on a young family that moves into a small home on Ash Tree Lane where they discover something is terribly wrong: their house is bigger on the inside than it is on the outside.
Show More
See it on
Share This
social & email
New Reviews
recent releases
New Posts
recently posted
Discussion and Replies