Main / Books / Everything I Never Told You

Everything I Never Told You

By Celeste Ng, An empathetically-told story of a family trying to make sense of a tragedy

Everything I Never Told You is Celeste Ng’s debut novel. It’s a slim book about a family struggling to make sense of the death of their daughter, Lydia.

In Everything I Never Told You by Celeste Ng, a teenage girl is found dead, drowned in a lake.

Her family is left reeling with unanswered questions and the realization that perhaps they didn’t know as much about her as they had thought. Her death prompts them to reflect upon how they got to where they are as they grapple with her death and try to move forward.

The Lees are an interracial family; the father, James, is of Chinese descent and the mother, Marilyn, is Caucasian. When she was younger, Marilyn hoped to be a doctor, but ended up passing on those ambitions in order to raise her family.

The story tells us about their meeting, their marriage and their difficulties in the wake of their daughter Lydia’s death. Meanwhile, Nathan or “Nath,” their older son, tries to find some resolution in the void his sister leaves behind, but ends up channeling his frustrations towards Jack, a classmate Lydia had been spending increasing amounts of time with before she died.

Everything I Never Told You is a brisk, 200-something pages. The story itself is rather unassuming and, with the exception of the death of Lydia, without many narrative “hooks.” I think a lot of books over-rely on deus ex machina-type events or extreme circumstances or soap-opera-y type plot twists to move their stories forward, to the extent that they become a hard to really relate to.

In contrast, Ng’s novel stays focused on telling a story of a few people, of unfulfilled ambitions and alienation and small disappointments. It’s an empathetic and sensitively-written story of an imperfect but well-meaning family, doing their best to live achieve the American Dream and cope with setbacks and grief, with some elements of mystery thrown in.

Considering it’s one of the few portrayals of a Chinese-American family in popular fiction, I can’t imagine it was easy to toe the line between underplaying vs. making the book entirely about race, but I thought she did a good job with it. While the book touches upon the topic of race quite a few times, at it’s core, it’s a book about family dynamics much more so than race.

Read it or Skip it

In the end, I can’t say I felt all that strongly about this book. It is interesting at times and there were things I think it does well, but wouldn’t go so far as to say I found it all that compelling or revealing. The story felt a little muted to me, like it touched upon topics but was hesitant to really get its hands dirty.

As this is Celeste Ng’s debut novel, I was mostly left with the feeling that she is certainly a capable writer, and I’d be curious to see what she comes up with next. She recently published her second book, Little Fires Everywhere, which was greeted with fairly solid reviews all around, so there’s a pretty good chance I’ll pick it up at some point and add it to my ever-expanding list of books to read.

Everything I Never Told You Movie Adaptation

There’s a movie adaptation of this book that is currently in-development for Netflix. In January 2019, Celeste Ng mentioned that Julia Roberts is attached to star as Marilyn, though IMDBPro currently lists no casts members (as of May 2019).

For updates to this and other book adaptations in the works, see the Book Adaptations Tracker.

See Everything I Never Told You on Amazon. 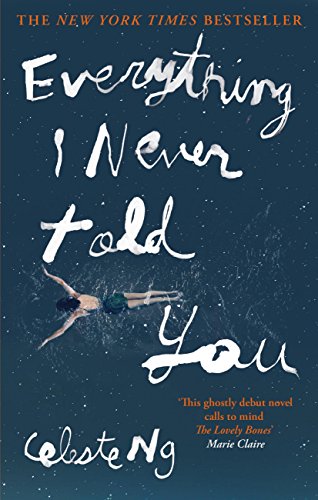 From the Publisher
“Lydia is dead. But they don’t know this yet.” So begins this exquisite novel about a Chinese American family living in 1970s small-town Ohio. Lydia is the favorite child of Marilyn and James Lee, and her parents are determined that she will fulfill the dreams they were unable to pursue. But when Lydia’s body is found in the local lake, the delicate balancing act that has been keeping the Lee family together is destroyed, tumbling them into chaos. A profoundly moving story of family, secrets, and longing, Everything I Never Told You is both a gripping page-turner and a sensitive family portrait, uncovering the ways in which mothers and daughters, fathers and sons, and husbands and wives struggle, all their lives, to understand one another.
Show More
See it on Amazon
Share This
social & email
New Reviews
recent releases
New Posts
recently posted
Discussion and Replies