Book review and synopsis for Cloud Cuckoo Land by Anthony Doerr, A story about kindness and humanity told through children across places and time in the past, present and future. Cloud Cuckoo Land is set to be released on September 28, 2021.

The heroes of Cloud Cuckoo Land are trying to figure out the world around them: Anna and Omeir, on opposite sides of the formidable city walls during the 1453 siege of Constantinople; teenage idealist Seymour in an attack on a public library in present day Idaho; and Konstance, on an interstellar ship bound for an exoplanet, decades from now. Like Marie-Laure and Werner in All the Light We Cannot See, Anna, Omeir, Seymour, and Konstance are dreamers and outsiders who find resourcefulness and hope in the midst of peril.

An ancient text—the story of Aethon, who longs to be turned into a bird so that he can fly to a utopian paradise in the sky—provides solace and mystery to these unforgettable characters. Doerr has created a tapestry of times and places that reflects our vast interconnectedness—with other species, with each other, with those who lived before us and those who will be here after we’re gone. Dedicated to “the librarians then, now, and in the years to come,” Cloud Cuckoo Land is a hauntingly beautiful and redemptive novel about stewardship—of the book, of the Earth, of the human heart.

What to Know About Cloud Cuckoo Land

Cloud Cuckoo Land by Anthony Doerr is an upcoming novel by Richard Powers, set to be released September 28, 2021.

Book Review: All the Light We Cannot See by Anthony Doerr 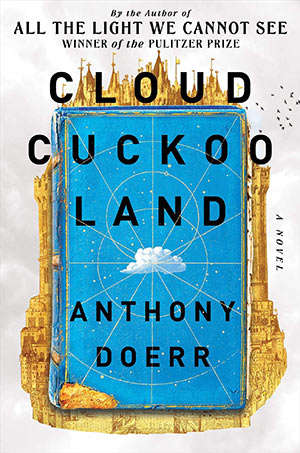