By Elizabeth Gilbert, A lively and spirited but long-winded coming-of-age story

City of Girls by Elizabeth Gilbert came out earlier this month with a big splashy release.

I read her huge bestselling memoir Eat, Pray, Love a long, long, long time ago. I think I remember enjoying most of it, but honestly it’s been so long I really don’t remember.

You can read my notes on Eat, Pray, Love if you’d like, but I jotted those down back before this was a book blog. Back then, I blogged mostly for my friends to read, so it reads more like random musings than a book review.

Anyway, point is, I wasn’t sure what to expect going into City of Girls. I’d heard both good things and bad, but I was curious enough to give it a shot.

Vivian, looking back on her life, describes her experiences moving to New York as a wide-eyed nineteen-year-old in the 1940’s. City of Girls is about her adventures there as she becomes a costume director at her Aunt Peg’s theater, the Lily Plahouse.

Vivian is drawn into the glamour and excitement of stage life, but finds herself caught up in its excesses as well. When Vivian finds herself in a sticky situation, she’s forced to grow up and gain some perspective on her life.

See City of Girls on Amazon.

In the opening pages, Vivian drops out of Vassar because she never attended any of the classes and ended up being ranked second to last in the whole class. As a parenthetical aside, she mentions that the only student who did worse had contracted polio. I laughed at that.

City of Girls is a coming of age story about a spoiled, vacuous and beautiful young girl living in New York. She’s mostly good at sewing and sex. As an older woman looking back, Vivian realizes her flaws. She proceeds to tell her story about the excitement and diversions of theater life, but also considers her mistakes and shortcomings.

Gilbert does an impressive job of suffusing the first half of the book with the spirit and energy of that time period and that place. You can hear heels clacking on the floors of the vaudevillian playhouse as they prepare for a show and the champagne bottles popping in the clubs afterward.

The first half of the book is snappy and joyous, but largely superficial, lacking much personal growth for Vivian. Then, 250+ pages into the story, Vivian finally finds herself in a messy situation that challenges her and forces to take a hard look on her life. This marks a clear turning point in the novel, and the second half of the book becomes more cautious and somber. The book starts having more to say at this point, though much of the energy and the fun of the book also dissipates somewhat as well.

There are many instances when the book is exactly the type of book it endeavors to be. In these moments, it charming and witty and sometimes funny or surprising. The dialogue sparkles and the characters brim with effervescence.

The problem is, these moments are draped against large swaths of text that where the book drags on. There’s so much atmosphere in this book, but I couldn’t help feeling again and again like I’d gotten the gist of what was going on and was ready to move on.

I hate saying this because it feels like such a hack-y criticism, but this book is just too long. Or I should say, it’s about a few hundred pages longer than it really needs to be. The book saves most of its wisdom for the very end, but I wouldn’t blame some readers if they’d given up by then.

Without giving anything away, Vivian does eventually gain some perspective and find personal growth in her story. The last few chapters feel a little tacked on, but it’s also where Gilbert processes Vivian’s story and reflects what Vivian learns from her experiences.

I don’t know if I entirely agree with some of Gilbert’s conclusions about people or life, but they’re some things to think about.

What’s up with this book premise?

One quick aside. The whole conceit of this novel strains credulity just a little bit. On page two, you find out this book is supposedly written in response to an inquiry from a younger woman, Angela. Angela wants to know what the deal was with Vivian’s relationship with her father.

But come on, am I supposed to believe any sane person answers a letter with a 500-page response? As the pages go by and Vivian starts to provide extensive details on her sexual exploits (why would she subject someone to this in a letter about their dad?), it’s clear that not even the author takes her premise very seriously.

I mean it’s not a huge deal, but at some point it seems a little silly.

After reading it, the very mixed reviews I’ve been reading make a lot more sense. This book has high points and low points. If you have the patience for it, the story is fun, spirited and takes you on a complete emotional journey.

At the same time, it tested my patience in parts, and sometimes the book seemed too laser-focused on Vivian’s coming to terms with her sexuality. I mean I get that’s what this book is about, but there were so many other types of women and social issues and women finding their place in the workforce and the whole war thing going on. In 500 pages, you’d think Gilbert would have found room to tackle a few other things as well, even if perfunctorily.

As I was reading, I was reminded of parts of Eat, Pray, Love. Gilbert seems to be saying some of the same things in City of Girls.

The main point that the book is adamant about is that it’s okay for women to live unconventionally and to have sex (and a lot of it, if they wish). Which it is. The thing is though, the whole Sex and the City thing was revolutionary…in the early 2000s. Similarly, Eat Pray Love came out in 2006. I’m just not sure this message feels as impactful nearly 15 years later.

What do you think? Have you read this or would you consider reading it? See City of Girls on Amazon.

See City of Girls on Amazon. 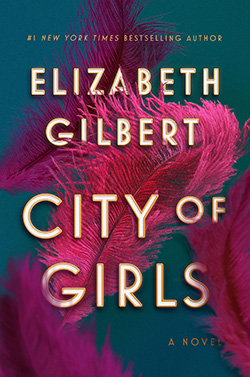 From the Publisher
In 1940, nineteen-year-old Vivian Morris has just been kicked out of Vassar College, owing to her lackluster freshman-year performance. Her affluent parents send her to Manhattan to live with her Aunt Peg, who owns a flamboyant, crumbling midtown theater called the Lily Playhouse. There Vivian is introduced to an entire cosmos of unconventional and charismatic characters, from the fun-chasing showgirls to a sexy male actor, a grand-dame actress, a lady-killer writer, and no-nonsense stage manager. But when Vivian makes a personal mistake that results in professional scandal, it turns her new world upside down in ways that it will take her years to fully understand. Ultimately, though, it leads her to a new understanding of the kind of life she craves - and the kind of freedom it takes to pursue it. It will also lead to the love of her life, a love that stands out from all the rest.
Show More
Read an Excerpt
See it on Amazon Book Depository