Book review and synopsis for Catch and Kill by Ronan Farrow, a recounting of Farrow's spy thriller-esque investigation into Harvey Weinstein's misdeeds.

In Catch and Kill, Ronan Farrow details his lengthy investigation into Harvey Weinstein's misdeeds. The story was reported on for over a year, and what began as a NBC News piece ultimately resulted in Farrow's departure and was published in the New Yorker instead.

Catch and Kill describes Farrow work on the story and the struggle to get it to out to the public. All the while, his efforts were being countered by Weinstein's aggressive attempts to stop it. This included issuing threats, to proposing business deals with related parties and even hiring intelligence operatives from the Black Cube.

The book also goes into the aftermath of the revelations and Farrow's related research. To a lesser extent, the book covers his reporting on the Black Cube and espionage (Part I, Part II and Part III). It also briefly discusses his stories about catch and kill in relation to Trump and the Matt Lauer situation at NBC News.

Part I discusses Farrow's initial reporting on the Weinstein story as an NBC investigative reporter, starting with Rose McGowan's story. As Farrow's research leads to real evidence in the form of a recording thanks to Ambra Gutierrez, Weinstein's makes efforts to shut the story down. Farrow is told by his bosses at NBC to put the story on hold, but he continues to pursue it anyway.

In Part II, Farrow continues reporting on the story despite serious pushback from his boss at NBC. Farrow learns about more Weinstein victims and settlements, including Zelda Perkins, Donna Gigliotti and Ally Canosa. He and McHugh turn it into a fully produced piece, but NBC is stalling. Meanwhile, Farrow is being watched by private investigators, he's being sent threatening texts, and it's not clear who he can trust.

In Part III, NBC decides to kill the story and Farrow's contract is terminated. Weinstein sends an official letter, threatening to sue him. Farrow moves the story over to the New Yorker and continues to dig. He interviews Mira Sorvino and Rosanna Arquette about rejecting Weinstein and the impact on their career. He also interviews more women with harassment and assault stories including Asia Argento, Sophie Dix and Emma de Caunes. The New York Times publishes two stories on Weinstein, but doesn't touch on the assaults or rape.

In Part IV, Farrow and the New Yorker fact-check their piece with Weinstein and his people, and October 10, finally publishes his exposé in the New Yorker. In the aftermath, he's forced to admit that NBC tried to kill the story. He also learns about the intelligence agency Weinstein had hired, the Black Cube, to prevent its publication and writes a series of articles about it. Farrow also looks into "catch and kill" practices in general and in relationship to Trump.

In Part V, Weinstein is arrested, but released on bail and the charges are later dropped. Ostrovskiy reaches out to Farrow and volunteers as a witness for the police investigating Weinstein and AMI. Meanwhile, the Matt Lauer situation comes to light as well as other sexual harassment scandals at NBC News. An internal investigator notes that Weinstein knew about Lauer and had threatened to reveal it. NBC News continues to misrepresent their role in the Weinstein story. Farrow and Jonathan get engaged.

In the Epilogue, Farrow meets up with Igor Ostrovskiy who has now left the Black Cube and hung up his own shingle as Ostro Intelligence. He wants to have a public service angle to his work to try to be involved with stuff that will leave society better off.

Catch and Kill: Lies, Spies, and a Conspiracy to Protect Predators by Ronan Farrow was released this week, and it’s really good. The book spans a period of three years, between 2016 and 2019, covering Farrow’s investigation into, publication of, related research and the aftermath of his exposé on Harvey Weinstein in the New Yorker.

Catch and Kill reads a bit like a spy thriller (to some extent) and is a fascinating story on a lot of different levels. There’s a bit of cloak and dagger involved with Farrow trying to research his story before Weinstein is able to find ways to kill it which adds a certain element of drama to the book.

On a more substantive level, understanding the many forces — the enablers, the influential people, the unethical behavior — that resulted in this story being buried for so long is obviously a more important part of this story. And it’s worth taking a deep dive, as Farrow has done here, into the topic to understand it.

At the same time, it seems very strange to say that a book about an investigation into sexual harassment was fun to read, but it was. It’s an interesting book, and it helps that we know in advance that some degree of justice is delivered in the end, even if far from sufficient. Plus, in addition to the spy thriller aspects of the novel, Farrow injects some humor into the book, mostly in the form of his conversations with Jonathan, his loving, but very exasperated partner. 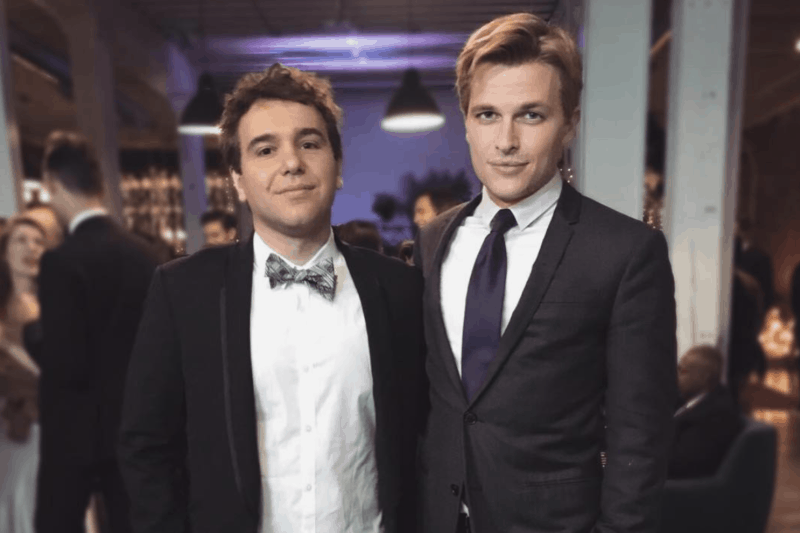 In terms of what the book covers, the vast majority is about the Weinstein scandal and its cover-up. Farrow’s New Yorker article on Weinstein is all about the experiences of the women, but this book focuses more on the behind the scenes intrigues it took to bring the story to light.

In Catch and Kill, Farrow is relentless about naming names. There are a lot of people who contributed to Weinstein getting away with his crimes for so long, and Farrow is more than happy to tell you who they are and what they did wrong. For example, Cyrus Vance Jr. was (and still is) the Manhattan the district attorney when they declined to charge Weinstein even after one of his victims took the risk of working with the NYPD and wearing a wire to get a confession out of him.

Farrow also covers, to a much lesser extent, his research into other related topics as well. He talks about the Black Cube, an intelligence agency Weinstein’s lawyers hired, and also the “catch and kill” practices the National Enquirer engaged in on behalf of Trump. It also discusses Matt Lauer’s sexual misconduct at NBC. However, all of this represents a relatively small portion of the book.

Overall, I felt the book was well worth the time. The organization feels a little jumpy at times, and I wish he was clearer about dates and timelines, but otherwise I had few complaints about this book. I did find it a little heartbreaking to hear about terrible and cowardly behavior of NBC News throughout the whole book. I spent a summer interning for their parent company, NBCUniversal, in the legal department, and met nothing but kind, professional, intelligent and supportive people. So that’s a bummer to read about.

(This part is less about the book and more about thoughts on sexual harassment and accountability in general.)

In the book, Farrow is brazen about pointing out people who participated in the cover-up. It’s well deserved, but I also think shaming people can only get up so far. I realize the goal of shaming (and why we as a society have gotten really aggressive about trying to shame people online and what not) is that we hope it’ll force people to do the right thing. But I think ultimately structural changes are always going to be a more effective way of getting to greater accountability than relying on individuals to point out and shame one another, even if it’s justified and works some of the time.

Can you imagine if board members, founders, executives, and major investors could be held criminally liable for sexual harassment and assault at any companies they direct, control or have major investments in? Even if it was as a misdemeanor with limited jail time, I think a vast majority of sexual harassment at companies would disappear overnight.

I’m not saying I think that’s the best way to solve this, but I wish a larger part of the conversation about sexual harassment and especially workplace sexual harassment had to do with finding real structural solutions. Shaming and legal defense funds are not going to cut it. Fact is, most sexual harassment is done not by famous people that people write exposés about. Instead, it’s more often random losers at companies with minuscule amounts of power that they choose to abuse.

Catch and Kill provides a lot more context on what it took to get a story like the Weinstein exposé out to the public and the machinations that are at work to keep things like it hidden. It’s also just a well-written interesting, informative, entertaining and even sometimes funny book.

You should totally read Catch and Kill if you have any level of interest in the Weinstein exposé, if you’re interested in journalism, if you care about current events, if you like well-written works of non-fiction or if you just like reading interesting books. It was eye-opening and a page-turner, as far as non-fiction books go.

As a caveat, I’d also add that while there is a spy-thriller quality to it, it does still read like a non-fiction book. Unlike in fiction where facts get glossed over in favor of narrative, Farrow, of course, has to err on the side of accuracy, so the book gets pretty “in the weeds” when it comes to the details of a lot of interactions. It didn’t bother me, but if you rarely read non-fiction, you might find some parts a bit tedious or slow compared to a thriller or something like that.

See Catch and Kill on Amazon.

Read the first pages of Catch and Kill 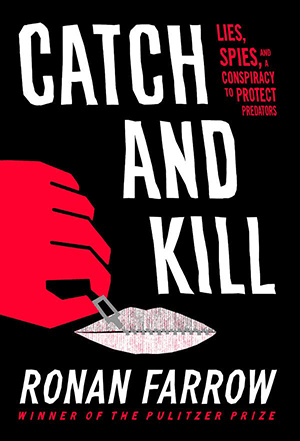 From the Publisher
In 2017, a routine network television investigation led Ronan Farrow to a story only whispered about: one of Hollywood's most powerful producers was a predator, protected by fear, wealth, and a conspiracy of silence. As Farrow drew closer to the truth, shadowy operatives, from high-priced lawyers to elite war-hardened spies, mounted a secret campaign of intimidation, threatening his career, following his every move, and weaponizing an account of abuse in his own family. All the while, Farrow and his producer faced a degree of resistance they could not explain -- until now. And a trail of clues revealed corruption and cover-ups from Hollywood to Washington and beyond. This is the untold story of the exotic tactics of surveillance and intimidation deployed by wealthy and connected men to threaten journalists, evade accountability, and silence victims of abuse. And it's the story of the women who risked everything to expose the truth and spark a global movement.
Show More
Read an Excerpt
See it on Amazon Book Depository