If you love books, board games and game nights, then this post is for you.

Well, it’s really for me since I’m obsessed with board games. Doing a strictly literary-themed game night is on my list of to-dos but I have yet to find enough friends who are book lovers and who also love game nights (and who live in the same place, plus whose schedules line up) to do it with me. But, I assume one day the stars will align to make it happen.

But anyway. Here’s my ultimate list of book-themed board games:

Johnathan Strange & Mr. Norrell: A Board Game of English Magic (2019) 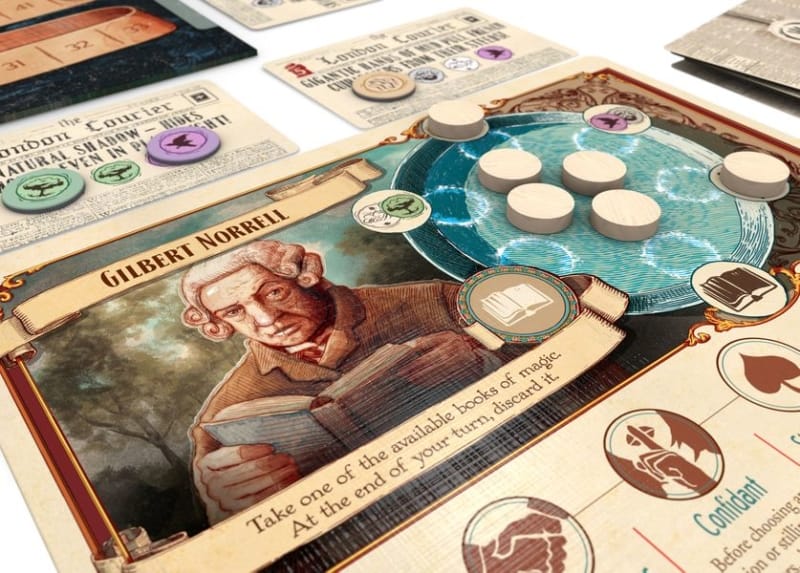 A beautifully illustrated game. Collect magic and power to become the most celebrated magician of your era. To be released June 2019.

The last one alive wins. Will you survive your voyage on the Pequod? 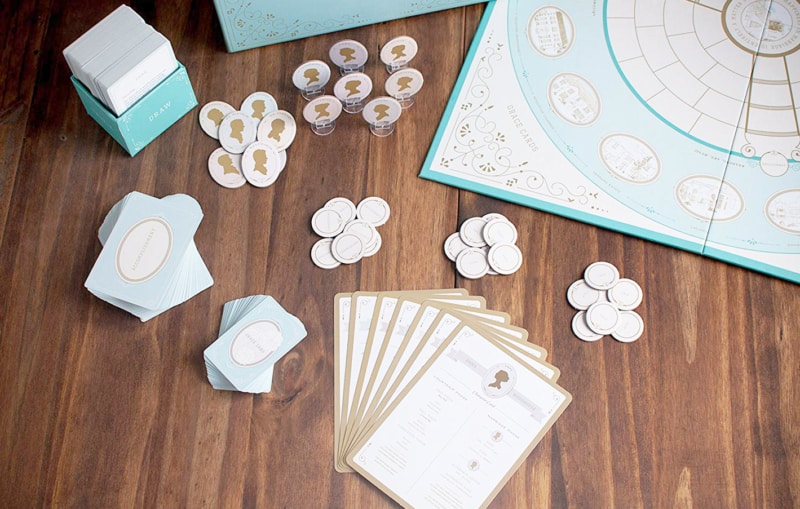 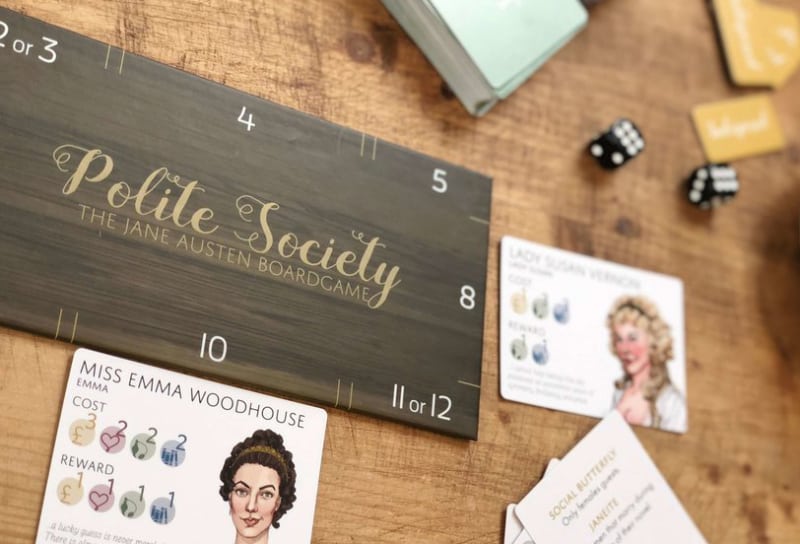 Generate assets to lure the best characters to your dinner party! The first person to complete their dinner party wins. A lovely game with a genuinely Austen-esque victory condition. 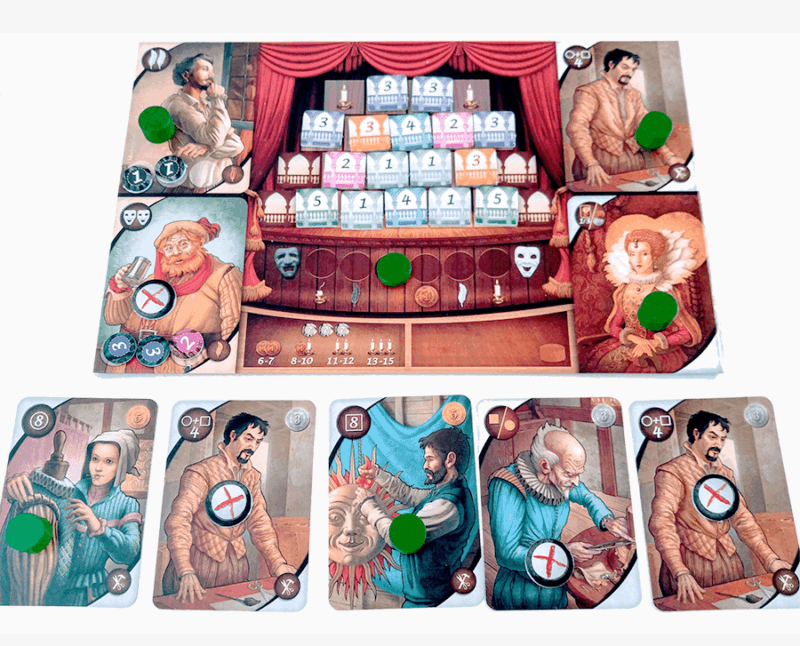 This is a board game favorite of many. In Shakespeare, you have one week to put together your show at the Globe Theater. Recruit actors, craftsment, jewelers, and more to make your show a success (and net you the prestige points you need to win). 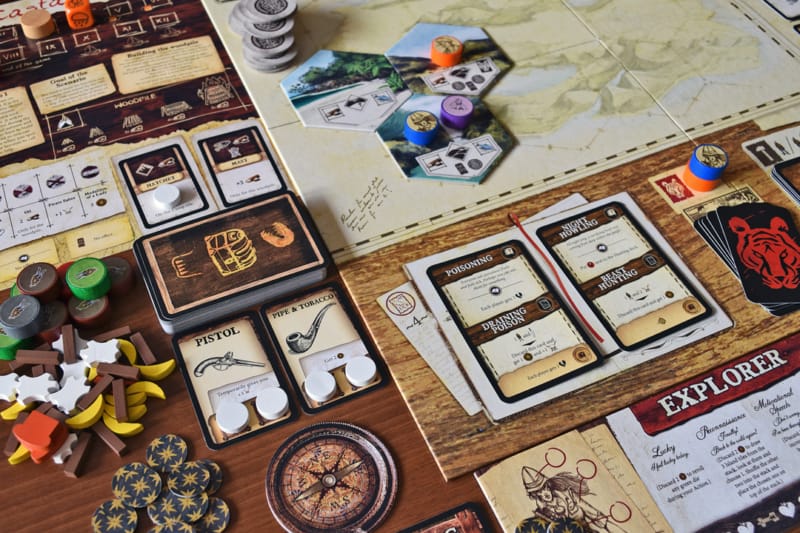 This well-loved, cooperative game is for serious board gamers. Create your own version of the classic castaway story. (The one from Z-Man games and Portal Games are the same game.) 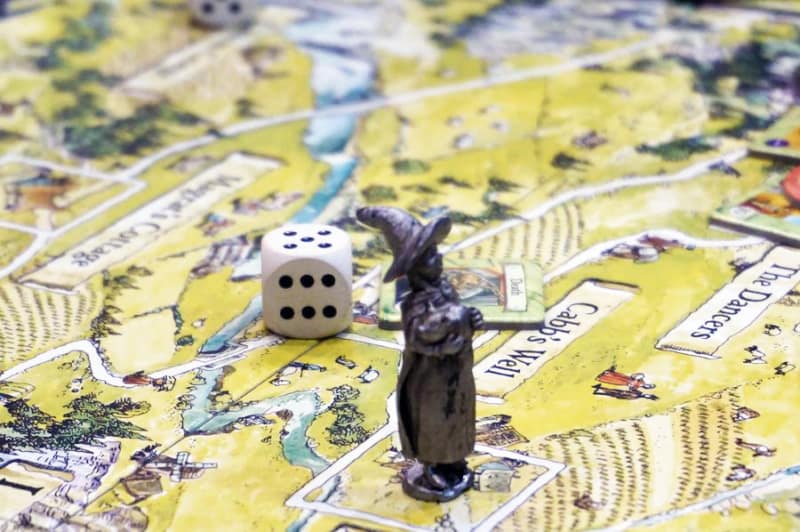 A Cards Against Humanity / Apples-to-Apples-type game with a Shakespearean twist.

This highly anticipated board game was originally released in 1979, but is getting a 2019 reprint and update thanks to its many dedicated fans. Based off Frank Herbert’s Dune novels, this game is set on an uncharted planet in space. Manage your faction to gain resources (spices), fight off sandworms (bad guys!), and defeat everyone else. Control the most strongholds on the planet independently or via an alliance to win.

Choose Your Own Adventure: House of Danger (2018) 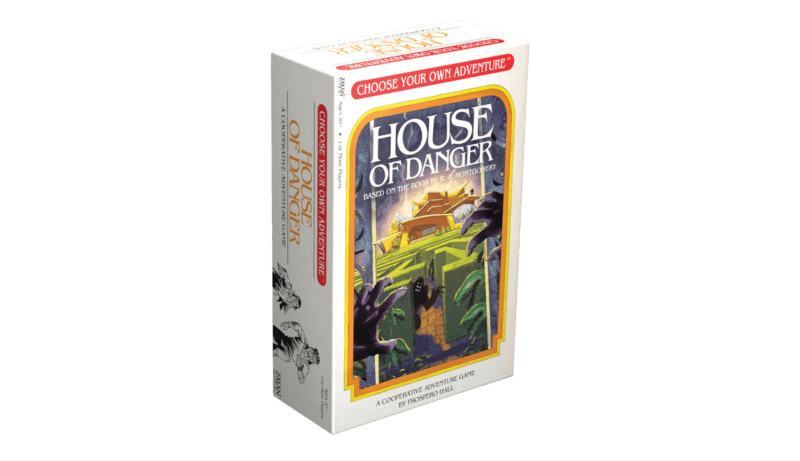 Based on the Edgar Allen Poe short story of the same name, in this game, you’ll try to curry favor with the prince and get information about which rooms the Red Death will visit, all before the clock strikes midnight. If you’re still alive, the player with the highest social status wins. Be the first to solve a series of thirteen cases from the files of Sherlock Holmes. Note that this game is not replayable, once you’ve solved all the cases, it’ll be time to pass it on to someone else to enjoy.

This detective game has gotten solid reviews, and players recommend it either solo or with one other person. Each game has 10 cases to be solved. Each case can only be solved once. (There’s a third game in this series, but the game is originally French and apparently the translation is abysmal.) 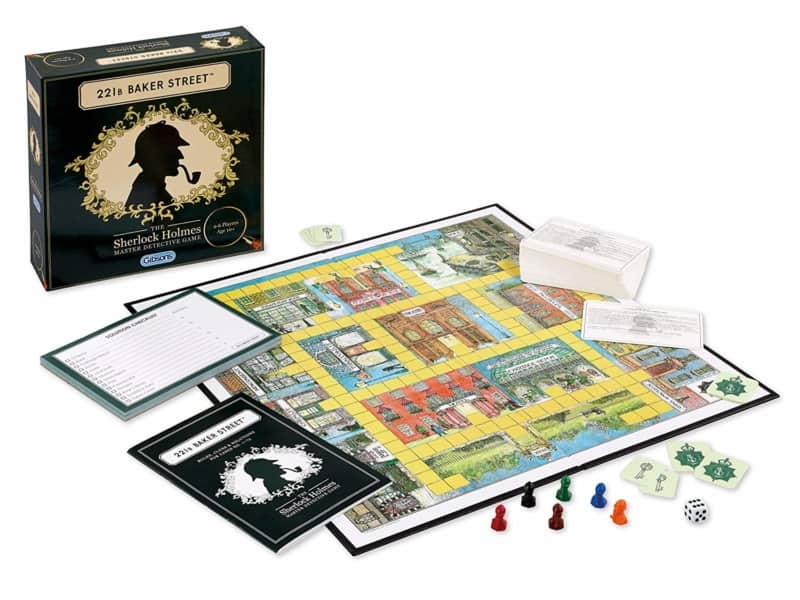 A Clue-styled game, but with little “cases” to be solved. It’s an update of the same game that was popular many years ago. The Gibson’s version has 100 cases. The Deluxe version has 200 cases. There are so, so many Lovecraftian games, but Eldrich Horror is one of the best, in my opinion. An ancient evil approaches, can you ward it off? 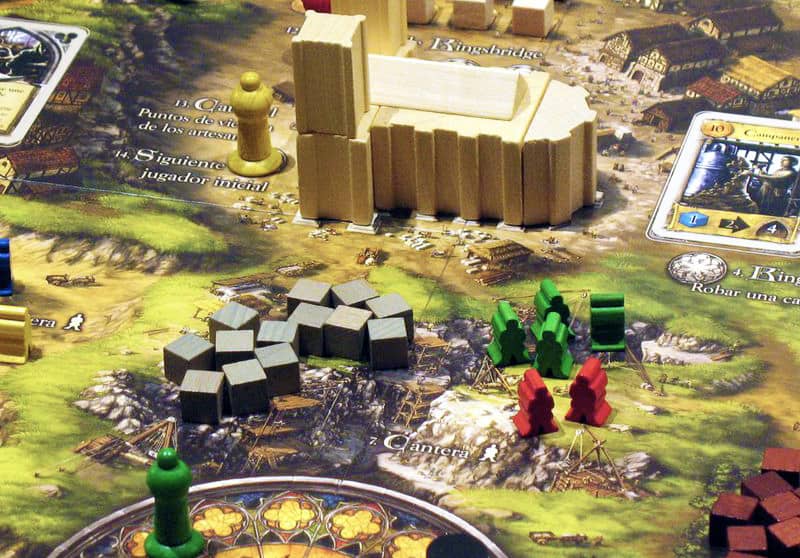 Based on Ken Follet’s Pillars if the Earth, this game is about the building of a cathedral. Get craftsman, gold, workers and victory points to win. Build your deck. Save Hogwarts.

Play as the Montagues and Capulets as you compete for control of Verona. There’s also a gorgeous French version of the game, Verone, from Ferti games. 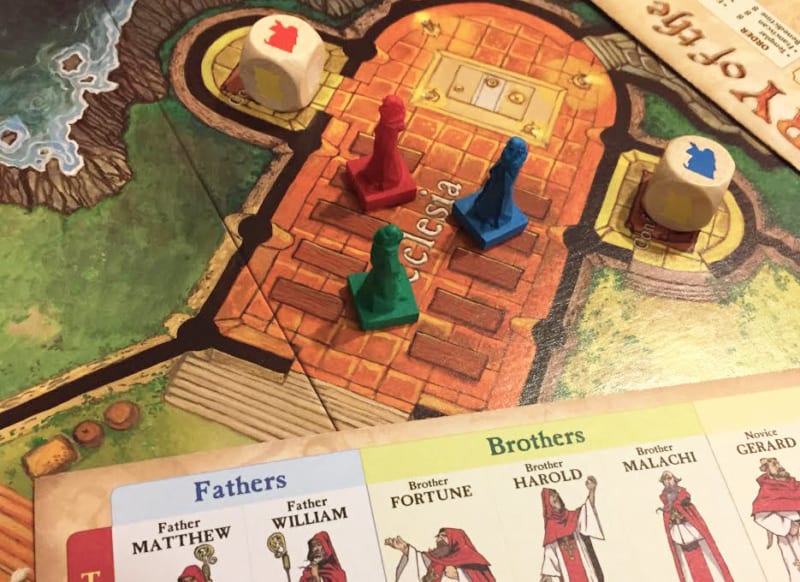 This game was originally styled based on Umberto Eco’s The Name of the Rose (it’s a murder mystery set in a medieval monastary) according to its designer, though it’s not marketed as such. Collect clues, make accusations, find the culprit! A fun game for the family, or just as a casual game for The Little Prince fans. Build a planet! Set in Shakespearean London, you’re actors at the Globe. Make your way around the board, dueling, collecting scenes from the Bard’s plays and finally “perform” the most scenes to win.

The Lord of the Rings: Journeys in Middle Earth (2019) 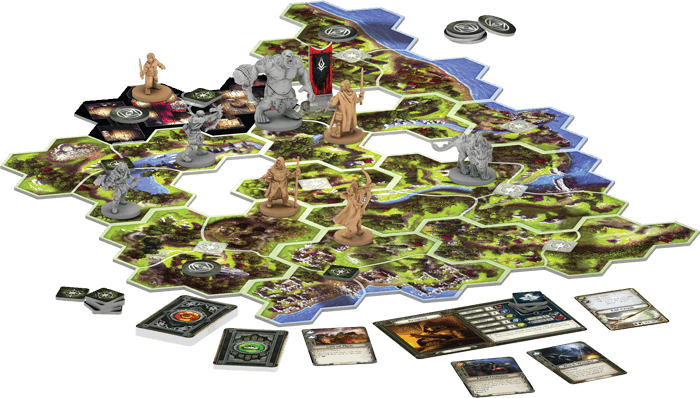 Fantasy Flight makes a number of Lord of the Rings board games. Journeys in Middle Earth is the newest, cooperative game. Gather your party, battle foes, and have fun traversing through Middle Earth. King Robert Baratheon is dead. Now’s your chance to use diplomacy, strategy and military might to lead your House to take the Iron Throne in Westeros. Can you win the Game of Thrones? 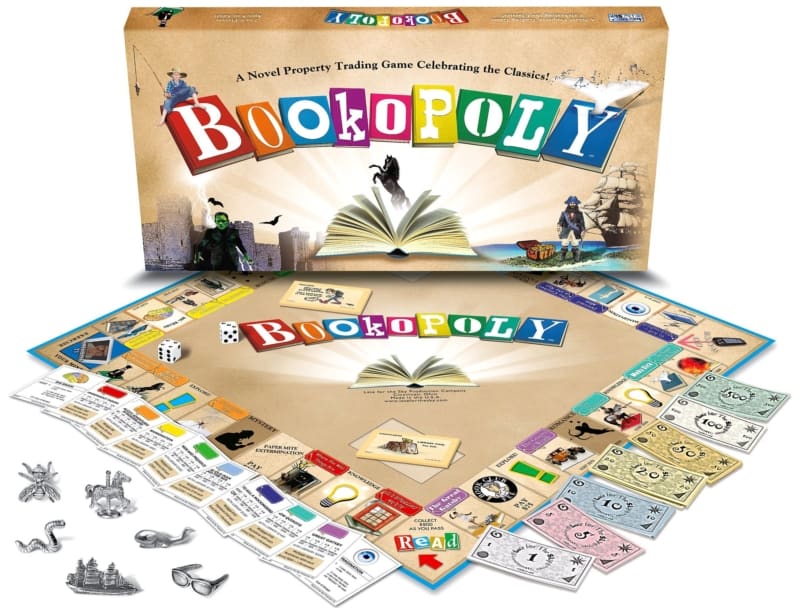 This creative game turns your favorite books into the star of the game. Pick phrases from the book that fulfill the requirements on the cards to get points.

What games didn’t make the cut?

Some games were literary, but reviews suggested were just not very good games. For example, the Trivial Pursuit Book Lover’s Edition game apparently has rather dated literary references that make the game a little impossible and not very fun.

There are also about a gazillion more Harry Potter, Sherlock, LOTR, Lovecraftian games, so I selected a few of the best for the list instead of including them all.

A lot of other games that didn’t make the cut were good games, but aren’t being made anymore, so are only available if you buy it from someone online, probably for a large markup. For example, Discworld: Ankh-Morpork is supposed to be fantasic, but you’ll have to find it from a collector. There’s also the game The Great Penguin Bookchase, a trivia-styled game, that looks fun, but isn’t available anymore. A Study in Emerald, based on the Neil Gaiman short story, is sadly out of print (“OOP”) as well.

Hope you enjoyed this list of book-themed board games! Am I missing anything? Drop me a line, below!