You Suck! A Love Story

You Suck: A Love Story , by Christopher Moore, opens in a daringly inauspicious way. “You bitch! You killed me! You suck!”

The opening line alone probably disqualifies Moore’s most recent title from being hailed as a great work of literature, but it’s appropriate enough for a story of two lovestruck vampires, their minions, a group of graveyard-shift grocery clerks and the evil ancient vampire who is coming after all of them.

For Moore, who has accumulated a dedicated following for novels such as Lamb: The Gospel According to Biff, Christ’s Childhood Pal and The Stupidest Angel, this stuff is standard fare. Open with a quirky premise, sprinkle a touch of the ridiculous and grind in a hard dose of reality. It’s a tried-andtrue formula that easily lends itself to humor and is versatile enough not to grow tired in its many incarnations.

Moore often borrows characters from his previous novels. In You Suck, they’re plucked from the pages of Bloodsucking Fiends, where we first met Jody and Tommy – a gorgeous redhead and an aspiring writer – who later transform into the novel’s vampire couple. These are not the vampires hidden in the tomes of Bram Stoker or even Ann Rice. Moore’s vampires are young and immature, living in a broken-down loft and feeding off the blood of a cat. (Shaved, of course – no one likes cat hair in their mouth.)

And forget the black cloak and sharp tux stuff, too. Elijah Ben Sapir, an ancient vampire more than 800 years old and still miffed over the pair’s previous attempt to destroy him, plots against the two while donning a bright-yellow jumpsuit he stole off a jogger.

The best parts of the novel are the journal entries of Abby Normal, a disaffected goth teenager who affectionately refers to the vampire couple as her Dark Lord and Lady. As she works toward winning the “privilege” of becoming a vampire, she chronicles Jody and Tommy’s exploits with an ironic mix of dead-set reverence to the ways of the undead and painfully banal descriptions of the more mundane tasks of angst-ridden teens.

Writes Abby of her vampyric aspirations: “I know I should be eating bugs and spiders and stuff to facilitate my vampyrism, but as a vegetarian, I haven’t developed the hunting skills, so I’ve started with some Gummi Bears I got at the theater. (Supposedly they are made out of beef pectin or extract of horse hooves or something, so I think they make a good transition to the nosferatu diet. And I like biting off their tiny heads.)”

Clearly, this is not highbrow humor. In its place are references to pop culture – like considering a listing on craigslist.com in order to find a minion – and cheap shots like dead hooker jokes. Blue, a Las Vegas call girl whose calling card is her blue-painted body, is one of the characters who joins the ranks of the undead, though this leads to a loss of customers. According to Moore, no one likes a dead hooker, but some get a little curious when it comes to boning a smurf. Good to know.

Undoubtedly, Moore’s brand of offbeat comedy can rub some the wrong way. But what some might consider crass and pedestrian is accessible and entertaining for others. Those willing to forgo tales with morals or life lessons and character development will find a tasty treat in You Suck.

For something more Count Chocula than Count Dracula, You Suck is not a bad way to spend a few hours. 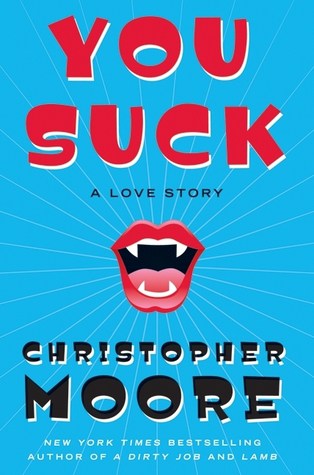 From the Publisher
Being undead sucks. Literally. Just ask C. Thomas Flood. Waking up after a fantastic night unlike anything he's ever experienced, he discovers that his girlfriend, Jody, is a vampire. And surprise! Now he's one, too. For some couples, the whole biting-and-blood thing would have been a deal breaker. But Tommy and Jody are in love, and they vow to work through their issues. But word has it that the vampire who initially nibbled on Jody wasn't supposed to be recruiting. Even worse, Tommy's erstwhile turkey-bowling pals are out to get him, at the urging of a blue-dyed Las Vegas call girl named (duh) Blue. And that really sucks.
Show More
See it on
Share This
social & email
New Reviews
recent releases
New Posts
recently posted
Discussion and Replies