By Amy Poehler, All You Need to Know Is That I Love Amy Poehler So You Can Guess Where This Review Is Headed

I love Amy Poehler. I decided I liked this book before I started reading it. This book was my Christmas present to myself (though to be honest, I buy a lot of books for myself, all the time, but this one was special because I was excited about it). I like Tina Fey, I like Mindy Kaling, but I love, love Amy Poehler. I think it’s because Amy Poehler seems like she knows who she is and doesn’t want to pander to anyone about it. I also think Amy Poehler has an earnestness that I think a lot of comedians are missing; I suspect it’s because it’s more revealing and raw sometimes to be earnest. A lot of comedians will slap you in the face with their brutal honesty, but earnestness has a vulnerability that’s hard to fake.

Anyway, I say all this because this really is not a constantly hilarious book. A lot of it is more serious than funny, with bits of comedic relief thrown in to ease everything else. Of course parts of it genuinely are meant to be funny and are, but lots of it is her speaking from the gut. But those parts are actually really good too.

Amy Poehler’s novel covers her life in general, from her looks to her interest and career in comedy, to general musings about life, to her children and her marriage and divorce. It’s is written in the form of essays, with lots of photographs and bits and pieces of other stuff thrown in. She tells us it was very difficult to write the book (repeatedly) and it sort of shows — some parts of it look like they were thrown in there to take up some space, and some parts of you can tell were written by force of will.

That being said, the book is entertaining and genuine enough to get you through the small amounts of slightly dodgy parts. And some of it really is very, very good. So maybe it’s a little uneven, but Amy Poehler is someone who’s funny, successful and has lived enough that she has some lessons to impart that are worth considering. One of my favorite parts was about her pursuit of her professional aspirations, which I am unable to paraphrase well, so I’ll just reproduce it here instead:

Try to care less. Practice ambivalence. Learn to let go of wanting it. Treat your career like a bad boyfriend.

Your career will never marry you.

Now, before I extend this metaphor, let me make a distinction between career and creativity. Creativity is connected to your passion, that light inside you that drives you. That small voice that tells you, “I like this. Do this again. You are good at it. Keep going.” That is the juicy stuff that lubricates our lives and helps us feel less alone in the world. Your creativity is not a bad boyfriend. It is a really warm older Hispanic lady who has a beautiful laugh and loves to hug. If you are even a little bit nice to her she will make you feel great and maybe cook you delicious food.

Career is different. Career is the stringing together of opportunities and jobs. Mix in public opinion and past regrets. Add a dash of future panic and a whole lot of financial uncertainty. Career is something that fools you into thinking you are in control and then takes pleasure in reminding you that you aren’t. Career is the thing that will not fill you up and will never make you truly whole. Depending on your career is like eating cake for breakfast and wondering why you start crying an hour later.  […]

I will say it again. Ambivalence is key.

You will never climb Career Mountain and get to the top and shout, “I made it!” You will rarely feel done or complete or even successful. Most people I know struggle with that complicated soup of feeling slighted on one hand and like a total fraud on the other. Our ego is a monster that loves to sit at the head of the table, and I have learned that my ego is just as rude and loud and hungry as everyone else’s. It doesn’t matter how much you get; you are left wanting more. Success is filled with MSG.

Ambivalence can help tame the beast. Remember, your career is a bad boyfriend. It likes it when you don’t depend on it. It will reward you every time you don’t act needy. It will chase you if you act like other things (passion, friendship, family, longevity) are more important to you. If your career is a bad boyfriend, it is healthy to remember you can always leave and go sleep with somebody else.

Hmm, I ended up quoting a longer passage than I mean to. Also, if that was too long for you, here’s a shorter quote that I also liked, it was in the context of working on Parks and Rec: “Because remember, the talking about the thing isn’t the thing. The doing of the thing is the thing.”

And also about Aubrey Plaza, which is nothing fancy but made me smile: “Both the character of April an the person of Aubrey are secret softies. When I was going through my divorce and sad about coming back to Los Angeles, Aubrey dressed up as an alien and surprised me at the airport. She is a big-hearted warrior and a good and loyal friend.” See? Genuine and a pleasure to read.

Anyway, my point is as follows: Amy is awesome and everyone should go buy and read this book because I say so. Plus it’s colorful and has lots of pictures and is not hard to read. The end and happy happy warm fun holidays!

Oh wait, I have to add one caveat: she jokes at two points in the book that she gets mistaken for (1) Rachel Dratch and (2) Tina Fey. Both times the joke is “that’s racist.” I should add, I know she’s half-joking, but no, it’s not and it’s not the same thing. Those are all white, female comedians. They’re being associated with each other based on things they do, as opposed to just the color of their skin. And being a comedian was a choice that she made and is a reflection of her values and she has control over it. It’s very different when black people get mistaken for pretty much any other black person that exists, and when Asian people are grouped together and mistaken for any other Asian person that exists. And the reason that’s frustrating is because one of the big difficulties of being a minority is that you don’t get to be judged as an individual, but as a member of a group for reasons that only reflect your skin color and not your life choices and values — that’s what we refer to as “racial stereotypes.” (“It’s just a joke!” you say. I know. But I also know as evidenced by my Facebook feed some people don’t think it’s that much of a joke, so I feel the need to point it out.) Anyhow, I still love Amy Poehler. 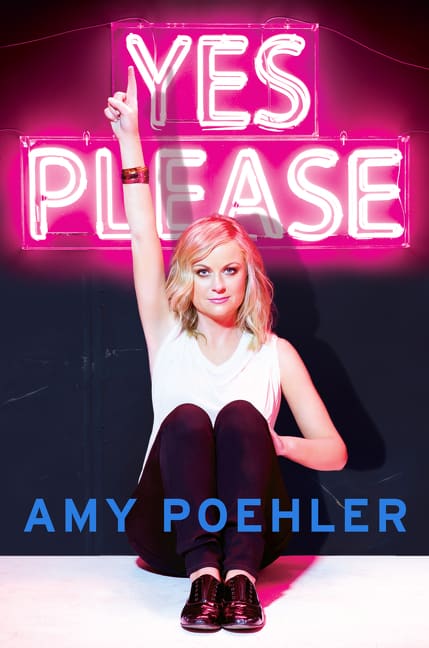 From the Publisher
Yes Please is Amy Poehler's hilarious and candid book. A collection of stories, thoughts, ideas, lists, and haikus from the mind of one of our most beloved entertainers, Yes Please offers Amy's thoughts on everything from her "too safe" childhood outside of Boston to her early days in New York City, her ideas about Hollywood and "the biz," the demon that looks back at all of us in the mirror, and her joy at being told she has a "face for wigs." Yes Please is chock-full of words and wisdom to live by.
Show More
See it on Amazon
Share This
social & email
New Reviews
recent releases
New Posts
recently posted
Discussion and Replies