By Melissa Bank, A Charming Collection of Short Stories

Melissa Bank’s The Wonder Spot presents a series of vignettes about the life of Sophie Applebaum, a witty and somewhat insecure Jewish girl from Surry, Pennsylvania. Beginning with a young Sophie skipping Hebrew classes to smoke cigarettes in the bathroom, the novel follows her path to adulthood as she searches for the basics: love and job satisfaction.

The people in Sophie’s life aren’t spectacular, from her noncommittal older brother, Jack, to her bad-boy romance interest, Bobby, to her beautiful roommate, Venice (“I’m lucky they didn’t name me Gondola. Or Canal”). But Sophie’s own sense of wonder and bewilderment lend her humor, sensitivity and charm.

Dismissing The Wonder Spot as “chick lit” isn’t fair. There are no Hermes scarves or Chanel purses, and this novel is about relationships – not romances. Sophie’s love life takes a backseat – or at least a side seat – to her dad’s death, her mom’s affair with a married man, and her tenuous connection to her Jewish faith.

Regrettably, The Wonder Spot shares just enough similarities with Bank’s first novel, Girl’s Guide to Hunting and Fishing to be accused of redundancy. But, Sophie’s story also shares the same charming narration and gentle sarcasm that made Girl’s Guide so successful. 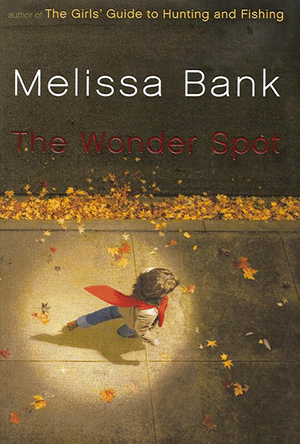 From the Publisher
Struggling with ambivalent feelings toward the passions and identities that are important to other members of her Jewish Pennsylvania family, Sophie Applebaum makes observations about her family life over the course of twenty years.
Show More
See it on
Share This
social & email
New Reviews
recent releases
New Posts
recently posted
Discussion and Replies