The Storied Life of A.J. Fikrey

By Gabrielle Zevin, A Cute But Imperfect Little Story

The Storied Life of A.J. Fikrey by Gabrielle Zevin is a cute but somewhat sappy little book, with a little melodrama thrown in. A.J. Fikrey is a touchy and argumentative bookstore owner on a small, touristy island town and recent widower. He walks in his store one day to find that a baby has been abandoned there for him to find, and from there, his life begins to change.

On the book cover and in the description it notes misleadingly, I might add, that “a small package” arrives, instead of saying it’s a “baby” — I assume this was a marketing decision. Honestly, if I’d known it was a story about a single dad raising a kid, I wouldn’t have read it. It’s not my thing. I don’t have a particular interest in stories about single dads, and I know I don’t want to read stories about babies. So, the book got off on shaky grounds with me. I should be clear that even though it’s about a bookstore owner and obviously being marketed as a book for people who like books, this is not a “thinker’s” book.

That said, it’s a cute, safe story. The writing is nothing special; a little stilted at times maybe, but not a big deal and almost not worth mentioning. I think the story in general was a little too saccharine for my tastes. The ending is uninspired, but predictably positive. Tone-wise, it reminds me of that time I read a Mitch Albom novel. The book’s saving grace is probably the cast of characters which are actually well-drawn and interesting.

I think I probably dove in to this one with overly-elevated expectations, which were very quickly lowered, so maybe that’s why I found myself being disappointed. There are many, many literary references, but they’re sort of just stuck in there randomly. The book is not clever. If you don’t mind a little sappiness and like books where titles of other books are dropped in, then you might like this. It wasn’t for me, but in a non-offensive way. It’s short and the cover art is nice, though. If it sounds like I am actively searching for nice things to say, that is because I am.

There’s a line that includes some dialogue one of the characters says that seems to come straight from the author’s mouth: “‘I love you,’ she says with a resigned shrug. ‘I want to leave you with something cleverer than that, but it’s all I know.'” 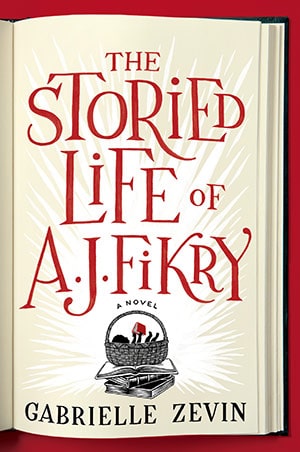 From the Publisher
A. J. Fikry’s life is not at all what he expected it to be. He lives alone, his bookstore is experiencing the worst sales in its history, and now his prized possession, a rare collection of Poe poems, has been stolen. But when a mysterious package appears at the bookstore, its unexpected arrival gives Fikry the chance to make his life over--and see everything anew.
Show More
See it on
Share This
social & email
New Reviews
recent releases
New Posts
recently posted
Discussion and Replies