Main / Books / The Prisoner of Heaven

The Prisoner of Heaven

By Carlos Ruiz Zafon, A gothic adventure set in Barcelona

I thought I’d take a dive into my ever-expanding TBR backlog since I haven’t been particularly enthused by any new releases lately. The Prisoner of Heaven by Carlos Ruiz Zafón has been high on my list for a while, given that The Shadow of the Wind has been one of my favorites for years.

My journey with this book has been a lengthy one. The plan was initially to read it in its original Spanish, a language where my level of comprehension would be described as rudimentary at best. For a long time, I’d sit down and spend an hour or two painstakingly translating 5-10 pages at a time, until I got about a third of the way through. Finally, I saw a copy of it in English at a used bookstore and decided it was high time to find out how the story ends.

The Prisoner of Heaven is a Gothic adventure novel set in Barcelona that is the third entry in Zafon’s Cemetery of Forgotten Books series. The series consists of four books — the last one was recently released — which can be read in any order, but all relate to the same nucleus of characters and themes.

In Prisoner of Heaven, Daniel Sempere and his father own a bookstore, Sempere and Sons, where they work with their friend, Fermin Romero de Torres. One day, a dark and mysterious stranger visits the bookstore, hinting at secrets about Fermin’s past and a key that he is seeking.

Daniel and Fermin embark on a dangerous search to uncover old secrets, revisiting Fermin’s past as a prisoner in the Montjuic fortress and revealing skeletons from the days of Franco’s violent regime in Spain. With a plot that pays homage to Alexandre Dumas’s Count of Monte Cristo and takes the reader deep into the dark streets and the hidden enclaves of Barcelona, Prisoner of Heaven is an adventurous and mysterious ride.

I originally read the first entry in this series, Shadow of the Wind, over ten years ago and loved it. The Prisoner of Heaven captures a lot of the same spirit of adventure and mystery. With its Gothic-style and a plotline directed at a booklover’s heart, it’s a fun piece of literature that’s easy to enjoy, packed full of elements of revenge, suspense, redemption and all that jazz.

The translation by Lucia Graves is largely solid, I think, doing justice to Zafon’s witty and sometimes poetic narration. I think a few sentences or phrases get translated a little too literally at various points. For example, at one point the phrase “you do the sums” appears in a situation where it has the meaning of “you do the math” — things like that. But for most people, it’ll feel like a non-issue.

The story is engaging and moves quickly; perhaps some will see this as being an insufficiently “serious” book or feeling a little rushed, but I think dwelling on these aspects seems like overthinking what’s basically a entertaining and atmospheric book. A more annoying issue is that the book suffers from the classic problem of books authored by old dudes, which is that all the female characters are just stereotypical plot props — the saintly woman, the good-hearted prostitute, etc. I’m hopeful that this is a problem that will diminish with time and awareness.

The Prisoner of Heaven is a fast-moving and enjoyable read for people who like Gothic-styled stories and books about people who love books. I’d still recommend that people who are interested in this start with Shadow of the Wind just because it sets up the Cemetery of Forgotten Books series and its characters quite nicely, though the books can technically be read in any order. I would also mention that while I liked this book overall, I loved Shadow of the Wind.

Either way, this would be a great vacation read or just something to read when you want to be entertained.

Have you read this or any other of Zafon’s works? What did you think? 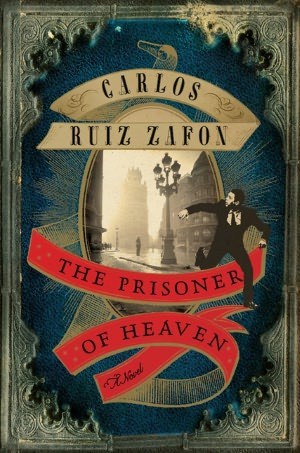 From the Publisher
Barcelona, 1957. It is Christmas, and Daniel Sempere and his wife, Bea, have much to celebrate. They have a beautiful new baby son named Julián, and their close friend Fermín Romero de Torres is about to be wed. But their joy is eclipsed when a mysterious stranger visits the Sempere bookshop and threatens to divulge a terrible secret that has been buried for two decades in the city's dark past. His appearance plunges Fermín and Daniel into a dangerous adventure that will take them back to the 1940s and the early days of Franco's dictatorship. The terrifying events of that time launch them on a search for the truth that will put into peril everything they love, and will ultimately transform their lives.
Show More
See it on Amazon
Share This
social & email
New Reviews
recent releases
New Posts
recently posted
Discussion and Replies