Main / Books / The Girl on the Train

The Girl on the Train

I’ll keep this short-ish, because this book has been reviewed thousands of times already and there’s not much to add. Around the time I started this site, I kept seeing The Girl on the Train by Paula Hawkins pop up everywhere. I was in the mood for a good mystery and couldn’t find anything that caught my attention so I ended up picking this up before going on a weekend trip to Las Vegas. During the trip, the group wanted to go clubbing, so I put on my clubbing clothes, went out to the hotel party with them, helped the guys get discounted admission and promptly walked out two minutes later. Within fifteen minutes, I was happily back in my pajamas and reading this book in the hotel room. So, that is the type of person I am. Anyway.

Rachel is a woman whose life has unraveled somewhat after the disintegration of her marriage which was prompted by her inability to get pregnant. Her husband is now remarried, living in a neighborhood nearby, and is raising a newborn child. Rachel, meanwhile, now lives with a roommate who tries to be understanding but is increasingly wary of having to put up with her alcoholism (and frequent blackouts) and general not-having-her-shit-togetherness.

Each day, Rachel commutes to job that she was actually fired from some time ago in order to keep up the appearance of being employed. And each day the train passes by the house of a young couple and she wonders about their seemingly-idyllic lives. Her reveries are interrupted one day when she sees the young woman, Megan, kissing another man. Rachel drunkenly decides to find and confront Megan, but ends up blacking out. Soon after, the police show up at her door to question her and she realizes that Megan has gone is missing.

I thought the book was fine and it kept my interest, but I did’t find it particularly inspired. I’m not saying that in a “this book is garbage” kind of way, because it’s not; it’s a perfectly serviceable mystery novel (and it’s certainly better than the garbage movie that they made based off it, which is a shame because I like Emily Blunt). I’m just not sure why it was so popular. As far as mysteries go, it’s fairly standard — accessible, moves along steadily, has a few surprises, and resolves. The characters are generally believable-ish and the plot largely makes sense (though it does involve one pretty large coincidence that I thought was a little too convenient).

Overall, I’d say I still thought it was okay, but I’d take a classic Agatha Christie novel over this any day. I’d recommend Girl on the Train if you’re a fan of the genre and running out of stuff to read, but there’s better stuff out there otherwise. If you haven’t read Tana French, for example, I’d suggest giving her a shot first. I didn’t like this enough to pick up Hawkin’s newest book, Into the Water, but I’d consider reading it if I found it for cheap and someone whose opinion I trust recommended it to me. 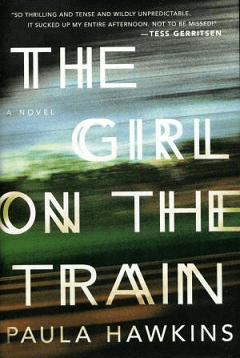 From the Publisher
Rachel takes the same commuter train every morning and night. Every day she rattles down the track, flashes past a stretch of cozy suburban homes, and stops at the signal that allows her to daily watch the same couple breakfasting on their deck. She’s even started to feel like she knows them. Jess and Jason, she calls them. Their life—as she sees it—is perfect. Not unlike the life she recently lost.

And then she sees something shocking. It’s only a minute until the train moves on, but it’s enough. Now everything’s changed. Unable to keep it to herself, Rachel goes to the police. But is she really as unreliable as they say? Soon she is deeply entangled not only in the investigation but in the lives of everyone involved. Has she done more harm than good?
Show More
See it on
Share This
social & email
New Reviews
recent releases
New Posts
recently posted
Discussion and Replies