By Peter Heller, A Poetic and Introspective Vision of a Post-Apocalyptic Future

The Dog Stars, by Peter Heller, is set in a post-apocalyptic near future where a virulent and aggressive strain of the flu has taken the lives of most of the population of the world, leaving the rest in fear of one another and desperate for survival. The survivors are few and usually those with some combination of combat and survival skills. Hig, who lost his wife and unborn child in the pandemic, has found an uneasy partnership with Bangley, a difficult person with good tactical skills, and the two get by on a solar powered farm near a former airfield.

Heller avoids getting into the nitty-gritty details that often feature prominently in post-apocolyptic fiction: how the situation developed, how the virus really works, why it spread so aggressively or what measures were taken to prevent it, etc. Instead, he paints them over with a superficial brush, letting you know that there was a disease and it won while everyone else lost, and focuses on the real story he wants to tell; The Dog Stars is about the drive to survive and need for connection, impetuses that are sometimes competing and other times complementary. It’s a sad but otherwise pretty unremarkable occurrence that finally unbalances the careful harmony that has allowed the two to survive, or at least subsist, for a number of years.

I enjoyed The Dog Stars, but it turned out to be a different type of book than I was expecting. It is a gentler, kinder story than you might imagine and not as high-octane as you might think a post-apocalyptic story would be; when the book opens, the turmoil of the pandemic has already been settled for almost nine years, and Hig is just taking things day by day. It is introspective, somewhat slowly paced and often poetic.

Whether The Dog Stars turns out to be a pleasant surprise or a let down depends what you’re looking for or whether you’re able to let go of your expectations for the story. When this book was released, there were a spate of apocalyptic-slash-dystopian novels that were being churned out, and I don’t think this book is much like most of them. I would recommend keeping an open mind and letting yourself take things a little slow if you want to enjoy this book. 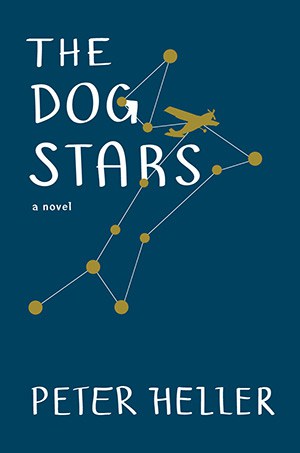 From the Publisher
A riveting, powerful novel about a pilot living in a world filled with loss—and what he is willing to risk to rediscover, against all odds, connection, love, and grace. Hig survived the flu that killed everyone he knows. His wife is gone, his friends are dead, he lives in the hangar of a small abandoned airport with his dog, his only neighbor a gun-toting misanthrope. In his 1956 Cessna, Hig flies the perimeter of the airfield or sneaks off to the mountains to fish and to pretend that things are the way they used to be. But when a random transmission somehow beams through his radio, the voice ignites a hope deep inside him that a better life—something like his old life—exists beyond the airport. Risking everything, he flies past his point of no return—not enough fuel to get him home—following the trail of the static-broken voice on the radio. But what he encounters and what he must face—in the people he meets, and in himself—is both better and worse than anything he could have hoped for. Narrated by a man who is part warrior and part dreamer, a hunter with a great shot and a heart that refuses to harden, The Dog Stars is both savagely funny and achingly sad, a breathtaking story about what it means to be human.
Show More
See it on Amazon
Share This
social & email
New Reviews
recent releases
New Posts
recently posted
Discussion and Replies