By Herman Koch, A Disappointing and Amateurish Book About Two Families and a Difficult Situation

The Dinner by Herman Koch takes place over the course of one dinner between two couples. The males at the table are brothers, one of whom is a prominent and recognizable politician, and, along with their wives, they have agreed to meet at an upscale restaurant to discuss an incident involving their teenage sons. A crime has been committed, and a resolution is needed. Originally published in Dutch, the book is surprisingly dark and meant to be unsettling and suspenseful.

The narrator, Paul, is unlikeable for various reasons, and purposefully so — but not in that charming like-him-but-hate-him kind of way. His personality does not really become clear until the last part of the book, so for the most part he just seems jealous and critical of his famous and respected brother and negative in general. It’s easy to imagine this guy sitting in this restaurant with a petulant sneer on his face. Most of the beginning is him inanely narrating the dinner. It reminded me of being on a bad date with a whiny guy who won’t stop saying dumb shit about the restaurant and complaining about his family, but you kind of have to just sit there and nod along to be polite. Eventually though, the plot beings to turn and things do start happening.

Honestly, this book reads like something a the star writer in a collegiate-level creative writing class would come up with. It’s premise sounds vaguely promising, there is some attempt to define distinct characters, it has a clear plot, lot of twists…but something about it just feels amateurish — the characters are not believable, the dialogue is sometimes weird (though perhaps that should be attributed to the translation, I don’t know). Sadly, there are components to it that could’ve made for an interesting story, but it needs a lot, a lot of re-writing.

To the extent that people like this book, I assume it’s because it uses a number of narrative devices — the gimmicky premise, a range of twists, the slow reveal regarding the narrator, etc. It’s also strangely dark which some may be drawn to. That being said, these things are done much, much better elsewhere. I’m not surprised the author has written a bunch of short stories since I think not having the substance to support these narrative devices is much more forgiveable in the short story form. To be fair, I was surprised in the last part, more so than I had anticipated while reading it. Nevertheless, most of the reason the misdirection was so effective is because the final twists aren’t really supported by anything else that happened in the book, they’re just surprising. In other words, the ending, to me, did not seem particularly clever, just unexpected.

One annoying trait of the book is that, starting from the very first page, the author hints at every important piece of information very aggressively for pages or chapters on end before letting you know what’s going on (even when it comes to pretty insignificant things, except that you think it’s going to be significant because of how long he spends not telling you what it is). It’s needlessly annoying, and it gets pretty old after awhile. Seriously, dude, not every single piece of information needs a “reveal,” sometimes you can just working information into the story and move along. It seems like someone gave this writer the advice “don’t give too much at once!” and he went overboard with it — like I said, amateurish. The author wanted to create a feeling of “suspense” and did not know how to do it properly. It’s b-rate suspense, like when you watch bad horror movies and they overuse cheap scares and creepy music.

The bigger problem is that the book simply does not make a lot of sense for most of it, and even when it’s supposed to be resolved, a lot of it still seems weird because the characters are so severely underdeveloped. The darkness of the characters is forgettable because it’s shallow and senseless. The book very, very seriously fails to create believable characters or to have any type of substance. It’s just stuff happening. These characters, their action and thoughts, none of it really adds up. They are entirely unrealistic and unexplained. Their consideration of the situation at hand is not interesting or complete enough, and is unrealistic enough to seem nonsensical. Even after the last reveal, which happens way too late, things aren’t really able to fall into place.

I wouldn’t recommend this book to anyone, mostly because I don’t think it’s particularly well done and it doesn’t say anything important. The flaws in the writing are actively aggravating. Mostly, this book seems to cry out for some very aggressive editing from a no bullshit editor. I will say though that, if you’ve heard of the plot of God of Carnage and are worried this is going to be a re-tread of that play (two couples meeting about a fight their kids had), then that fear is unfounded — this book goes in a pretty different direction, both in terms of substance and quality. 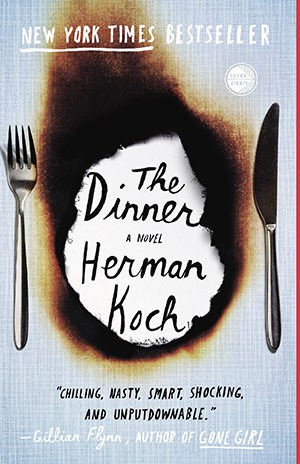 From the Publisher
An internationally bestselling phenomenon: the darkly suspenseful, highly controversial tale of two families struggling to make the hardest decision of their lives—all over the course of one meal. It's a summer's evening in Amsterdam, and two couples meet at a fashionable restaurant for dinner. Between mouthfuls of food and over the scrapings of cutlery, the conversation remains a gentle hum of polite discourse. But behind the empty words, terrible things need to be said, and with every forced smile and every new course, the knives are being sharpened. Each couple has a fifteen-year-old son. The two boys are united by their accountability for a single horrific act; an act that has triggered a police investigation and shattered the comfortable, insulated worlds of their families. As the dinner reaches its culinary climax, the conversation finally touches on their children. As civility and friendship disintegrate, each couple show just how far they are prepared to go to protect those they love. Skewering everything from parenting values to pretentious menus to political convictions, this novel reveals the dark side of genteel society and asks what each of us would do in the face of unimaginable tragedy.
Show More
See it on Amazon
Share This
social & email
New Reviews
recent releases
New Posts
recently posted
Discussion and Replies