By Adrian McKinty, A thriller with a diabolical premise

The Chain by Adrian McKinty has a cover that looks like something a 14-year-old boy designed with clipart, but a very intriguing premise.

The backstory behind The Chain’s development is pretty interesting as well. McKinty, after struggling financially and getting evicted (he recalls “all our stuff being dumped on the sidewalk in front of our house. And my little girls looking up at me and going, ‘is everything going to be alright?’ And me thinking, ‘I don’t know.'”), had decided to give up writing.

He was working as a bartender and Uber driver when another writer read about McKinty’s struggles on his blog. The writer referred his own agent to McKinty, and finally McKinty found his first financial success in The Chain. Pretty inspiring, right?

In The Chain, a young girl is abducted on the way to school. Soon, her mother Rachel is contacted by a nefarious organization called The Chain. If she wants her daughter back, she needs to pay a ransom and kidnap someone else’s loved ones. For her daughter to live, Rachel needs to perpetuate and become a part of The Chain.

With this Mephistophelian plot in place, Rachel will have to find a way to get her daughter back.

And as soon as I understood what the book was really about, I felt grateful that McKinty was using his skill for coming up with diabolical schemes to publish fiction instead of turning to crime. As far as I know, anyway.

Clearly, the premise is one of the strongest aspects of this book. It’s instantly gripping, and it kicks off rights away without much fanfare, which was all hunky-dory for me.

This book kept my attention pretty consistently throughout. The plot moves ever forward at a pretty consistent pace. There are twists, turns and surprises in the action, though mostly pretty standard action-thriller-type stuff. In all, it’s a page-turner, and if you like those types of novels, I don’t think you’ll be disappointed in what The Chain has to offer.

I also appreciated that The Chain doesn’t take itself entirely seriously. While it’s not trying to be a comedy or anything, it occasionally throws in some narration that indicates that, yes, he knows it’s a little ridiculous. When Rachel gets her instructions, she looks down at “her hastily scrawled, extremely incriminating checklist.” And and one point Rachel makes a decision because she “doesn’t have time for a Norman Bates–style car-sinking scene.”

Things like that are probably what got me through the rougher bits of the book.

There’s a number of parts where The Chain gets a little too bogged down in logistics. While I appreciated the research, it meant that more mundane aspects of the logistical details ended up taking precedence over things like atmosphere or suspense.

Moreover, once the plot gets into motion, The Chain started coming off as a little ridiculous, which made the book less suspenseful. There’s a cheesy quality to its supposedly menacing messages.

The Chain is supposed to be ominous and diabolical, but it nags too much, micromanages and acts too illogical to seem scary. Every 15 minutes in this book someone from The Chain calls or crops up to nag Rachel to keep going, reminds her yet again that she needs their approval over everything, bugs her about some stuff and once even tries to impede her progress for no good reason.

It reminded me less of a powerful and lethal network and more of a bunch of nosey-slash-annoying busybodies with nothing better to do with their day.

Beyond that, I’d say the writing is fine, but occassionally inartful. This book is all plot and the words are mostly there to move things along. Pretty standard for a thriller though, so not a reason to skip this book.

There’s a movie deal in the works for the Chain. For all the details, see Everything We Know about The Chain Movie.

Read It Or Skip It?

I think for a quick thriller to read on an airplane or in a waiting room, this book is more than serviceable. It’s got an intriguing premise and keeps things moving.

This book reminded me a little of my thoughts on The Silent Patient, which is another bestseller right now with a good premise, okay-ish execution and big movie deal bolstering it. There’s definitely an interesting idea and the plot has some sturdy bones, though parts of the actual execution leaves something to be desired.

Is it great literature? Of course not. But it delivers on its promise of an eventful and exciting plot. In the right hands, I could see the movie being a fun ride. If you like thrillers, this one deserves a read. If you don’t, wait for the movie!

Either way, considering McKinty’s past and how before this book he’d been pounding the pavement with his writing for years and given it up, I hope a lot of people can find inspiration in his story. You can’t help but to be happy for the guy.

What do you think? Will you be reading The Chain? See The Chain on Amazon.

Part One: All The Lost Girls

Part Two: The Monster in the Labyrinth

See The Chain on Amazon. 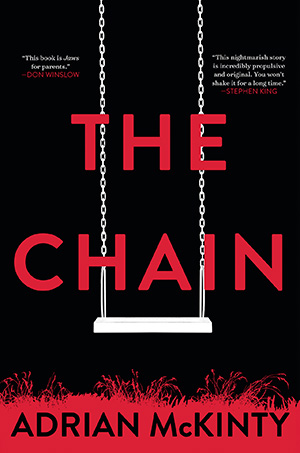 From the Publisher
YOUR PHONE RINGS. A STRANGER HAS KIDNAPPED YOUR CHILD. TO FREE THEM YOU MUST ABDUCT SOMEONE ELSE'S CHILD. YOUR CHILD WILL BE RELEASED WHEN YOUR VICTIM'S PARENTS KIDNAP ANOTHER CHILD. IF ANY OF THESE THINGS DON'T HAPPEN: YOUR CHILD WILL BE KILLED. YOU ARE NOW PART OF THE CHAIN
Show More
Read an Excerpt
See it on Amazon Book Depository