By Jonas Jonasson, An Unconventional and Cheeky Romp Through Modern History

– It really is you…Yury finally managed to exclaim. But…You speak Russian?
– Yes, I went on a five-year course in your country’s language shortly after we last met, said Allan. The school was called Gulag. What about that vodka?

The 100-Year-Old Man Who Climbed Out the Window and Disappeared by Jonas Jonassen is kind of a mouthful, but it’s also a book with plenty of surprises, wry humor and lots and lots of colorful characters and modern historical figures.

Originally published in Swedish, the novel follows the life and adventures of a centenarian, Allan Karlsson, who decides to escape from the retirement home he lives in on his hundredth birthday and go for one last adventure. In the process, he manages to piss off (and incapacitate) a local gang member. Meanwhile, hot on his tail is a police inspector who has been assigned to track him down in light of the missing gang member.

As the novel progresses, it recounts Karlsson’s epic life story where he comes across the likes of characters such as President Truman, Robert Oppenheimer, Mao Tse-tung, Stalin, General Franco, Kim Il Jong…and the list goes on. The result is a highly entertaining novel that is part satirical police procedural and part irreverent tour of modern world history.

I began this book and ended up reading it straight to the end, which is uncommon for me, but a testament to how engaging and funny this book can be, especially if you like modern history, which I do. It reminded me a little bit of Forrest Gump actually, except in a world history context and with even more outlandish and bizarre encounters and even more of them.

I should be clear that the whole book is something of a parody of events and historical accuracy is not a thing that preoccupies the author. The historical framework is more of a light sketch and is only accurate in the broadest of senses. For example, my favorite parts involve Karlsson’s encounters with the entirely fictionalized Herbert Einstein, the illegitimate brother of Albert Einstein. Herbert shares a father with and resembles his more famous brother, except that he is “notoriously stupid” and is utterly useless to the Soviets who mistakenly capture him in hopes of gaining atomic secrets. See what I mean?

Allan Karlsson, our protagonist, is your classic anti-hero — he’s a hundred for christssakes! He has a dubious educational background and comes from some bumfuck random town in Sweden. He also gets continually embroiled in high-profile and highly politicized situations, considering he has very little ambition and absolutely no political affiliations. In fact, all Allan Karlsson really seems to want at any given time is good food and good drink. Notably, his main expertise is in explosives, a hobby he cultivates privately at his home as a young lad. It turns out to be consistently useful, but also ends up getting him sent to jail for a few years when he decides to blow up his house for fun.

That said, Karlsson is clever and funny, and it is impossible not to root for the guy. He picks up a gang of equally bizarre and unexpected friends (plus an elephant) in his various adventures, and you’ll end up rooting for them all (including the elephant).

If you like unconventional humor and modern world history, you should just stop what you’re doing and go out and buy this book, since I’d be floored if you didn’t enjoy it. (For example, if you understood and thought the quote above was funny, that’s a pretty good indication you’ll like the rest of it.)

Beyond that, I think it’s perfect for anyone looking for lighthearted but substantive fare. I would say the people who might not like it are the ones that don’t like things that are too “zany.” This book is a little out there at times, not meant to be realistic, and so it’s not for those who are unwilling to suspend their disbelief. It bends historical facts to their fullest extent before they break, but it’s done purposefully, not out of neglect, and all in furtherance of the book’s parodying tone and far-fetched plot. So if you’re willing to put aside your skepticism for a moment and just enjoy the ride, there’s a lot of cheeky humor and unexpected twists that await to delight you. 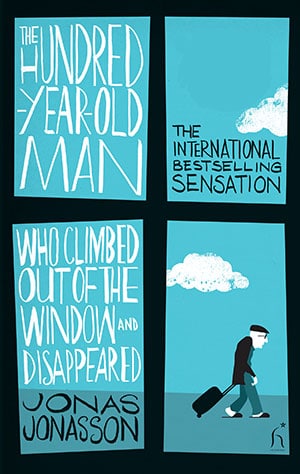 From the Publisher
After a long and eventful life, Allan Karlsson ends up in a nursing home, believing it to be his last stop. The only problem is that he's still in good health, and in one day, he turns 100. A big celebration is in the works, but Allan really isn't interested (and he'd like a bit more control over his vodka consumption). So he decides to escape. He climbs out the window in his slippers and embarks on a hilarious and entirely unexpected journey, involving, among other surprises, a suitcase stuffed with cash, some unpleasant criminals, a friendly hot-dog stand operator, and an elephant (not to mention a death by elephant). It would be the adventure of a lifetime for anyone else, but Allan has a larger-than-life backstory: Not only has he witnessed some of the most important events of the twentieth century, but he has actually played a key role in them. Starting out in munitions as a boy, he somehow finds himself involved in many of the key explosions of the twentieth century and travels the world, sharing meals and more with everyone from Stalin, Churchill, and Truman to Mao, Franco, and de Gaulle. Quirky and utterly unique, The 100-Year-Old Man Who Climbed Out the Window and Disappeared has charmed readers across the world.
Show More
See it on Amazon
Share This
social & email
New Reviews
recent releases
New Posts
recently posted
Discussion and Replies