By Francine Pascal, A Dip Back Into Sugary Waters

Sweet Valley Confidential is a hot mess of a book that is bookended by an awkward beginning and a nauseating ending. It almost becomes a not entirely terrible book, but tragically-slash-comically crashes and burns in a sugary, taffeta-and-chiffon-covered mess in the last 30 pages or so.

Between watching the show and reading the 500+ Sweet Valley books I owned, I spent a large chunk of my childhood enthralled with the World of Sweet Valley and desperately wanting to be like the smart, pretty, responsible, well-meaning, but somewhat conservative Elizabeth Wakefield. I decided in middle school that I wanted to be a journalist because Elizabeth was a journalist. Elizabeth liked tall, brown-haired boys who liked to write and so did I. She wore a single-strand, lavaliere necklace and so I did, too. My sister’s name is even Jessica!

But lets face it, Sweet Valley was always sort of, well, drivel, for lack of a better word. It’s a sappy-sweet world of silly drama surrounding the Wakefield twins, Jessica (the wild/fun twin) and Elizabeth (the good/holier-than-thou one). So, my expectations for Sweet Valley Confidential: Ten Years Later were low. Like, really, really low. Nevertheless, I pre-ordered it and, despite being overwhelmed by schoolwork, read it from cover-to-cover the day it came out.

In the very first Sweet Valley book, Sweet Valley High #1: Double Love, published in 1983, Jessica tries to steal Todd Wilkins away from Elizabeth, who has a crush on him. From there, the series continues to be peppered with Jessica’s schemes in various contexts, and as the series proceeds, Todd is described to be Elizabeth’s “steady” and is the only recurrent character in Elizabeth’s love-life to crop up in the various spin-off series.

As Confidential opens, Elizabeth is now in her late twenties and is working as a journalist, having escaped to New York after her discovery of an affair between Todd and Jessica. Jessica, former cheerleader and general silly flirt, now works for a cosmetics company; and, Todd, our basketball star-turned-alcoholic-turned-vagrant loser is now a successful sports writer. The primary thrust of the book is the upcoming family event that Elizabeth is expected to go back to Sweet Valley for, which Jessica and Todd – who are now a couple – will attend as well.

In addition being written in a weirdly stilted voice that is littered with wanna-be technospeak, this world of stereotypes and sickly-sweet people has now transformed into a cast of sad, lonely, bitter people. Steven, the twins’ older bother, cheats repeatedly on his wife, who responds by baking like a madwoman. The loveable class clown, Winston, made it rich and now is isolated and surrounded by strangers and users (he eventually drunkenly falls to his questionably accidental death). Lila cheats on Ken and is divorcing him. The class gossip is as mean and empty as ever. Sweet but homely Enid is now an arrogant doctor and kind of a jerk. Elizabeth, too, finds herself compromising her principles and values as she plots to bring a hot bartender to the occasion, trying to prey on Jessica’s tendency to stray in order to sabotage Jessica’s relationship with Todd.

Perhaps this cast touches base a little closer to reality than the original characters, but it’s clearly an overly pessimistic view. While it could be construed as some sort of social commentary that addresses the characters’ original unrealistic superficiality…that’s probably giving the book too much credit. At any rate, it is a sad and angry world, but devoid of the introspection or depth that one would hope to see accompany such a stark view. In lieu of internal reflection, a vapid petulance seems to accompany the unhappiness that pervades the new Sweet Valley.

And, by some miracle, as the book approaches and descends upon the actual event — it actually starts to have something substantial to say. Elizabeth is, for once, somewhat more human in her failings, which seems more sincere, but the book’s real source of insight (well, relative to the rest of the series) is seen between Jessica and Todd. Because of the nature of the inception of their relationship, despite their mutual good intentions, they struggle — “just two guilty people” who feel trapped by their feelings of isolation and the shame that burdens their relationship. Knowledge of their mutual infidelity colors their relationship with the rest of the community, Todd is unable to trust Jessica, and Jessica is resentful of her alienation from her sister. Eventually, Jessica leaves Todd and reunites with Elizabeth.

If the book had ended there, it would have made sense in the context of the series. It would be a darker, less-bubble-gummy, and probably needlessly depressing book, but it would be an understandable accompaniment to the superficiality of the original series. Moreover, if the book was seeking to be more modernized, instead of stupidly name-dropping “facebook” and “Google,” it would reflect more modernized views of teaching girls to rely on themselves as opposed to defining themselves by their relationships to men, which the series has historically been prone to do. Finally, Jessica choosing Elizabeth over Todd would seem to take the series in a full circle and reinforces the theme of the whole series — the adventures of two sisters who are different, but love and learn from each other.

Of course, the book continues, and while I won’t get into the details because they are dumb, it really is like the book just popped a valium, did some speed and went on some hell-bent, crazy-happy writing bender for the remaining pages. Let’s just say loves are reunited, happy couples abound, everyone ends up as friends, and in classic Jane Austen-y style, it ends in a wedding! Oh, and there’s a badly written scene where there apparently is intercourse that is “over the top!” and also “spectacular!”

The book’s shortcomings are more than overwhelming. I could get into it further, but in short: there’s plenty of bad writing, some of it is just kind of kooky, the male characters are very obviously how women see men and not rooted in reality, the book has elements that are clearly holdovers from writers who are older and not “with it” … I could go on. The point is, die-hard fans will read this regardless. (I cried when Jessica and Elizabeth made up.) However — and this is a big however — it’s not a very good book, unfortunately. For a non-fan, the book will seem bi-polar and in need of some sort of intense counseling. Finally, I’m pissed off Todd and Jessica end up together. I’m just going to put that out there. That sucks. I should also note that I’ve been very generous with this book because I loved Sweet Valley. I think most people would just describe it as “hilariously bad.” One wonders if the creator secretly despised her sweet, cotton-candy world.

The only really good line in the book is delivered by the twins’ mom who, as the family dispute erupts, orders her husband to “bring out the fucking cake.” 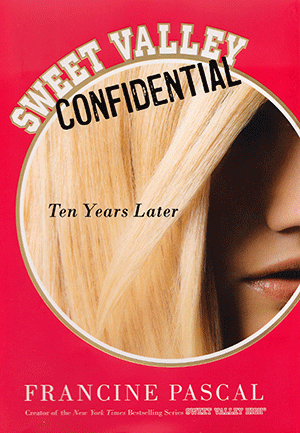 From the Publisher
Now with this striking new adult novel from author and creator Francine Pascal, millions of devoted fans can finally return to the idyllic Sweet Valley, home of the phenomenally successful book series and franchise. Iconic and beloved identical twins Jessica and Elizabeth Wakefield are back and all grown up, dealing with the complicated adult world of love, careers, betrayal, and sisterhood.
Show More
See it on
Share This
social & email
New Reviews
recent releases
New Posts
recently posted
Discussion and Replies