By Salman Rushdie, An Inquiry Into Religion, Love and Revenge

It’s the oldest of stories told in the newest of ways. Recently rereleased in paperback, Shalimar the Clown is an inquiry into the most primal themes and perennial human conflicts – religion, love and revenge. It’s a novel draped in ancient mythologies and folklore, where Rumpelstiltskin dances alongside Indian princesses. Yet out of the reverie of dragons and kings comes a story intensely aware of the times.

True to form, Salman Rushdie, who will be joining the Emory English department this spring, spins another brilliant tale in which his characters represent a larger conflict at hand. Like Midnight’s Children’s allegory of India, the fates of the novel’s star-crossed lovers are interwoven with that of Kashmir, a predominantly Muslim region in the Indian subcontinent.

The lovers reside in Pachigam, a traditional village in Kashmir. Boonyi, a beautiful dancer, and Shalimar, the tightrope walker, fall in love despite their religious differences. “There is no Hindu-Muslim issue. Two Kashmiri – two Pachigami – youngsters wish to marry, that’s all,” says the village sarpanch, making his declaration in the spirit of Kashmiriyat, “the belief that at the heart of Kashmiri culture there was a common bond that transcended all other differences.”

But Boonyi betrays her husband for a loveless affair with the charming U.S. ambassador Max Ophuls, launching Shalimar’s descent into hate and vengeance, mirroring the destruction of an entire people. Kashmir is cruelly shaped by India’s heightened militarization, personified by the lustful, barbarous General Kachhwaha. Meanwhile, ideological fanaticism triumphs as the Iron Mullah – the embodiment of militant zealotry, formed from pure metal – gains legions of followers. In this intricate parable, Rushdie questions the ramifications of our actions and details the evolution of a murderer.

In this novel, Kashmir is as much of a character as are the doomed lovers. Shalimar reads like Rushdie’s ode to his Kashmiri grandparents, and his description of the destruction of Pachigam is noteworthy in its tragic sincerity.

In a series of nested flashbacks, Rushdie’s yarn takes the reader through the history of the region – from the centuries of Muslim rule, to the imperialist division, through the kindling and cooling of the succession movement and the Indo-Pakistani wars.

As characters whose fates parallel history, Shalimar‘s cast risks dissolving into mere allegory, but Rushdie toes the line deftly. As Shalimar completes his transformation from Shalimar the clown to Shalimar the assassin, the weight of his humanity is terrifying.

Rushdie blends allusions, recurring motifs and his signature magic realism, the use of fantasical elements in otherwise realistic settings, into a literary triumph. What results is an intricate and satisfying novel.

In an epigraph, Rushdie borrows from another pair of lovers: “A plague on both your houses.” Rushdie’s literary parallels draw attention to distinct patterns and motives. When distilled into something more basic, the shades of gray that color politics and religion dissolve. 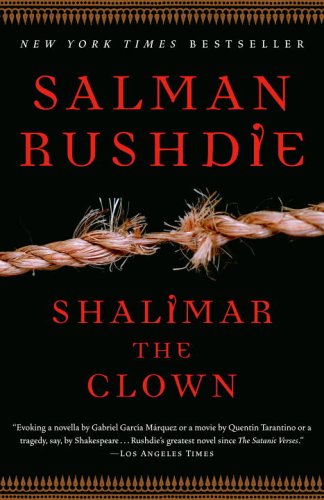 From the Publisher
Shalimar the Clown is a masterpiece from one of our greatest writers, a dazzling novel that brings together the fiercest passions of the heart and the gravest conflicts of our time into an astonishingly powerful, all-encompassing story. A powerful love story, intensely political and historically informed, Shalimar the Clown is also profoundly human, an involving story of people’s lives, desires and crises – India Ophuls’ desperate search for her real mother, for example; Max’s wife’s attempts to deal with his philandering – as well as, in typical Rushdie fashion, a magical tale where the dead speak and the future can be foreseen. Shalimar the Clown is steeped in both the Hindu epic Ramayana and the great European novelists, melding the storytelling traditions of east and west into a magnificently fruitful blend – and serves, itself, as a corrective to the destructive clashes of values it scorchingly depicts. Enthralling, comic and amazingly abundant, it will no doubt come to be seen as one of the key books of our time.
Show More
See it on
Share This
social & email
New Reviews
recent releases
New Posts
recently posted
Discussion and Replies