By Ernest Cline, A nostalgic romp but only for geeky white dudes

The Spielberg trailer for the upcoming Ready Player One movie was recently released, so I knew I needed to finally read this book that had been quietly collecting dust on my shelf for the last few years.

If Willy Wonka loved the 80s and video games instead of candy, the result would be this book. In Ready Player One, Wade Watts — screen name Parzival — is one of the countless people looking to find a treasure hidden inside the virtual reality simulation environment, “OASIS,” that now dominates everyone’s lives. The reward up for grabs is billions of dollars and control over the OASIS ecosystem. OASIS was built by Jim Halliday, a geek and 80’s fanatic, so finding this treasure, an “Easter Egg” in video game parlance, requires mastery of the classic games Halliday played and knowing arcane facts about the things Halliday loved.

Meanwhile, an all-powerful corporate conglomerate, the IOI, has set out to win the competition as well, using whatever means necessary to wrest control over the ubiquitous OS into their evil grasp. The game, then, is set up and for the most part proceeds along as you would expect, but of course, the point is always the journey.

From Zork to Monty Python to Dungeons & Dragons and DeLoreans and Joust, the geeky references are endless. And I do mean endless. I ended up skimming a few sections that were just name after name of arcane old stuff. If you were to take those things out of the book though, there wouldn’t be much left to it. There’s some amount of inventiveness to imagining this virtual world, but beyond that, the world of Ready Player One is not particularly well-fleshed out. The global economy has collapsed due to depletion of natural resources and an energy crisis, the book tells us, and some elements of social order and public schools and other things like that have gone down with it. Beyond that, details of how this world functions are mostly left up to your own imagination. The virtual world gets a much meatier treatment but it’s basically a more technologically advanced and all-encompassing version of Second Life and WOW mixed together (Wade’s full name is Wade Owen Watts, of course).

Point is, the references are basically what Ready Player One is good for, so depending on your level of interest in those things, this may or may not be an interesting book for you. The book is at times entertaining, but largely predictable. The book’s cult status is not surprising, considering the layers upon layers of nostalgia to dig through in the quest for the ultimate prize. I’m sure it’ll make for a colorful movie.

I was born too late into the 80’s to appreciate a lot of the references, and the book is very, very guy-centric (which I am not). Literally, there’s a list of authors and directors that “Halliday” likes, the entirety of which consists of a straight list of 29 old white dudes (In case you doubt me: “Douglas Adams. Kurt Vonnegut. Neal Stephenson. Richard K. Morgan. Stephen King. Orson Scott Card. Terry Pratchett. Terry Brooks. Bester, Bradbury, Haldeman, Heinlein, Tolkien, Vance, Gibson, Gaiman, Sterling, Moorcock, Scalzi, Zelazny.” “Cameron, Gilliam, Jackson, Fincher, Kubrick, Lucas, Spielberg, Del Toro, Tarantino. And, of course, Kevin Smith.”) In fact, despite there being hundreds of references to bands, movies, videogames and various other media, I don’t think you could name more than a couple (if any) that mention anything that is represented by a female protagonist or frontman.

Overall, I found this book pretty forgettable. There’s not much emotional resonance in this journey, but it’s not that kind of book, so that’s not a big deal. I thought I would like it since I really enjoyed Robin Sloane’s Mr. Penumbra’s 24-Hour Bookstore (which is also very nerdy-dude-ish), but I think it was missing the sense of humor that the Sloane novel had. Ready Player One takes itself a little too seriously for a book that mostly consists of a list of dorky shoutouts. I’d say if you are a nerdy older white dude (child of the 80’s), you will probably love this. Everyone else can probably just watch the movie. 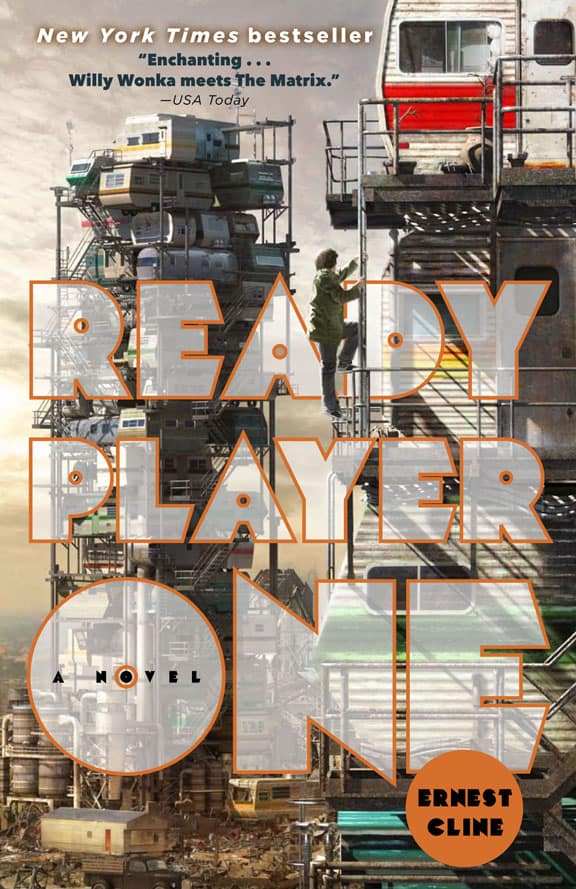 From the Publisher
In the year 2044, reality is an ugly place. The only time teenage Wade Watts really feels alive is when he's jacked into the virtual utopia known as the OASIS. Wade's devoted his life to studying the puzzles hidden within this world's digital confines—puzzles that are based on their creator's obsession with the pop culture of decades past and that promise massive power and fortune to whoever can unlock them.

But when Wade stumbles upon the first clue, he finds himself beset by players willing to kill to take this ultimate prize. The race is on, and if Wade's going to survive, he'll have to win—and confront the real world he's always been so desperate to escape.
Show More
See it on Amazon
Share This
social & email
New Reviews
recent releases
New Posts
recently posted
Discussion and Replies