By Neil Gaiman, A charming and satisfying little book

By now, many of the main elements and characters found in Norse mythology will be familiar to a lot of people, thanks to Marvel’s Avengers: Thor, the son of Odin and god of Thunder, features prominently; Loki, the troublemaker; Mjollnir, Thor’s legendary hammer; the Bifrost, the prismatic bridge between realms; Asgard, the realm of the gods; and so forth.

Neil Gaiman’s Norse Mythology recounts many classic norse tales and shapes them into a coherent narrative, beginning with the creation of the world and ending in Rangnarok, the apocalyptic battle of the gods.

I found all of them delightful, though I’ve always been a sucker for folktales and mythology. Ever since I cracked open a copy of Mythology by Edith Hamilton that my sister was reading for school, I knew I loved these timeless, wonderful, evolving tales seeking to explain the history, forces and phenomena around us.

Gaiman’s book is a breezy and charming little novel. It includes stories explaining the tides and why there are earthquakes, things like that. As in Greek Mythology, the Norse gods are self-serving and often duplicitous or otherwise flawed, though the Norse gods seem to drink a lot more beer than the Greeks. He injects some humor into his stories, too, but sticks closely to the source material. In interviews, he mentions that he left out stories that were too similar or “too rapey” and things like that.

Thor fans will probably get a lot out of finding out more about the source material, for example Odin’s one eye has a mythological origin, and isn’t just something Marvel added in for flavor. It’s a quick read, something you could start and finish in an afternoon. I would easily recommend it to anyone who enjoys classic stories and of course mythology. 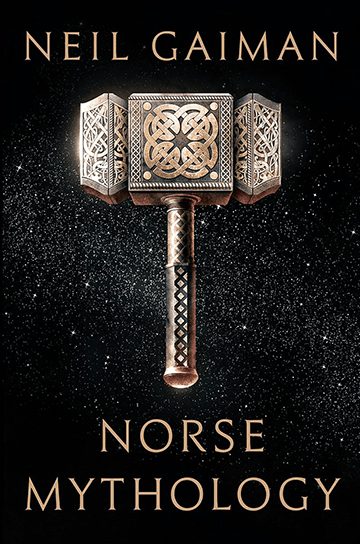 From the Publisher
In Norse Mythology, Gaiman stays true to the myths in envisioning the major Norse pantheon: Odin, the highest of the high, wise, daring, and cunning; Thor, Odin’s son, incredibly strong yet not the wisest of gods; and Loki―son of a giant―blood brother to Odin and a trickster and unsurpassable manipulator.
Gaiman fashions these primeval stories into a novelistic arc that begins with the genesis of the legendary nine worlds and delves into the exploits of deities, dwarfs, and giants. Once, when Thor’s hammer is stolen, Thor must disguise himself as a woman―difficult with his beard and huge appetite―to steal it back. More poignant is the tale in which the blood of Kvasir―the most sagacious of gods―is turned into a mead that infuses drinkers with poetry. The work culminates in Ragnarok, the twilight of the gods and rebirth of a new time and people.
Through Gaiman’s deft and witty prose emerge these gods with their fiercely competitive natures, their susceptibility to being duped and to duping others, and their tendency to let passion ignite their actions, making these long-ago myths breathe pungent life again.
Show More
See it on Amazon
Share This
social & email
New Reviews
recent releases
New Posts
recently posted
Discussion and Replies