By Robin Sloan, An Ode to Nerds, RPGs and Book Lovers

Robin Sloan’s Mr. Penumbra’s 24-Hour Bookstore is a nerdy dude’s ode to everything nerdy dudes love: technology, coding, tabletop RPGs, startup culture, smart people, boobs (not a typo), books, typefaces, and everything else in that vein, including the dorky guys that get the beautiful girls. It’s set in San Francisco, in an old-school bookstore with an even older secret attached to it, with the world of tech, Kindles, startup millionaires, and 3D-graphic design just outside.

In the novel, Clay, our protagonist, (or should I say hero?) sets off on a “quest” to locate his boss, Mr. Penumbra, who has disappeared. He tips the chain of events in motion by accidentally cracking the code behind a puzzle (thanks to AdWords, his Googler love interest, Kat, Google Book Scanner, and some Hadoop) that is key to the operation of the strange bookstore. Putting together a group (fellowship?) of his friends (the Wizard, the Rogue, etc.), each with their own unique skillsets, they traipse off in search of the puzzling organization and his boss — and possibly even the key to eternal life (Insert Lightning Strike / Other Sound FX Here).

The book is about 300 pages, and if you have even a passing interest in these types of things, they will fly by; some books are fun to read because they are just very joyous, and this is a great example of that. Things like Mechanical Turk and Google Street View play prominent roles in pushing the plot forward, and references to Harry Potter, LoTR, D&D and Star Wars abound. And Clay even completes a side-quest at one point (the book doesn’t call it that, but that’s what it is). Plus, there are lines like the following: “Neel takes a sharp breath and I know exactly what it means. It means: I have waited my whole life to walk through a secret passage built into a bookshelf.” Like I said, it’s more of an ode than a novel.

It was a little on the nerdy side, even for me (Penumbra’s first name is Ajax, I mean come on, haha), but Sloan has infused it with so much joy that it’s easy to look past. Unsurprisingly, Sloan turns out to be an ex-Twitter employee. And you can almost feel him gleefully grinning at you through the pages. And sure, the whole nerdy guys getting the hot girls thing and the start-up doing boob animations made me roll my eyes, hard, but I guess I can (mostly) look past it. (Maybe I’ll shave off a few tenths of a point). The writing’s not perfect, but the book is pretty funny. The ending is satisfying, though maybe a little more dreamy than realistic. Plus, there’s stuff in there about typefaces, which I am a sucker for. In all, Mr. Penumbra’s 24-Hour Bookstore reminded me a lot of the Silicon Valley tech scene in general: fun, maybe immature at times, but an innovative and fascinating ride as well. For any tech-focused, nerdy Douglas Adams fans out there: This book is your Manifesto.

A fictional typeface called Gerritszoon is featured in the book (well, at the time it was fictional — I think someone has created one now). In the book, the creator of it is cited as “Griffo Gerritszoon” and he worked closely with his friend Aldus Manutius, a printer, to popularize the typeface which became ubiquitous.

In real life, Gerritszoon does not exist, but the non-fictional Aldus Mantius was a Venetian publisher and printer, who was very influential. Mantius is responsible for inventing italic type, helping to create what we now know as the paperback format, and establishing the modern usage of the semi-colon. One of the people that worked for him was a Francesco Griffo. Some of the typefaces based on work commissioned by Mantius and designed by Griffo include ” Bembo, Poliphilus, Garamond, and Hermann Zapf’s Palatino and Aldus”1. It seems pretty clear that the font Gerritszoon is supposed to be representative of is Garamond. I’m drawing this conclusion based on a number of things:

Finally, as a sidenote, the name of the fictional corporate entity in the book that licenses Garamond, The Festina Lente Company, comes from “Festina lente,” which is an old adage in Latin. It means “make haste slowly”. The (non-fictional) printer’s mark of Aldus Mantius featured this adage and the “emblem of the dolphin and anchor […] has been used since Roman times to illustrate”3 it. 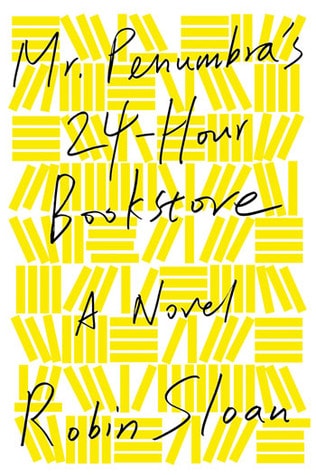 From the Publisher
The Great Recession has shuffled Clay Jannon out of his life as a San Francisco Web-design drone―and serendipity, sheer curiosity, and the ability to climb a ladder like a monkey has landed him a new gig working the night shift at Mr. Penumbra's 24-Hour Bookstore. But after just a few days on the job, Clay begins to realize that this store is even more curious than the name suggests. There are only a few customers, but they come in repeatedly and never seem to actually buy anything, instead "checking out" impossibly obscure volumes from strange corners of the store, all according to some elaborate, long-standing arrangement with the gnomic Mr. Penumbra. The store must be a front for something larger, Clay concludes, and soon he's embarked on a complex analysis of the customers' behavior and roped his friends into helping to figure out just what's going on. But once they bring their findings to Mr. Penumbra, it turns out the secrets extend far outside the walls of the bookstore. With irresistible brio and dazzling intelligence, Robin Sloan has crafted a literary adventure story for the twenty-first century, evoking both the fairy-tale charm of Haruki Murakami and the enthusiastic novel-of-ideas wizardry of Neal Stephenson or a young Umberto Eco, but with a unique and feisty sensibility that's rare to the world of literary fiction. Mr. Penumbra's 24-Hour Bookstore is exactly what it sounds like: an establishment you have to enter and will never want to leave, a modern-day cabinet of wonders ready to give a jolt of energy to every curious reader, no matter the time of day.
Show More
See it on Amazon
Share This
social & email
New Reviews
recent releases
New Posts
recently posted
Discussion and Replies