Main / Books / Me Before You

By Jojo Moyes, A Disappointing Read

So, this book was all over the bestseller lists and has amazing ratings on Amazon. I’m bewildered. To start, Me Before You is probably more accurately described as Chick Lit rather than actual, you know, literature. I feel a little bad saying this since I’m always loathe to discount female writers just because a story includes a romantic story line, but honestly, the material is pretty thin. But even as someone who has no problem admitting that she loves well-written chick lit and a nice love story, this book is just not very good nor particularly unique.

It’s a straightforward story, free of any subplots or main side characters. Louisa meets Will. She’s poor, plain looking, unemployed and a bad dresser. He’s handsome, wealthy and, sadly, paralyzed due to an accident not too long ago due to his adventurous ways. He’s bitter and she needs work, so she takes a position as his caretaker. He’s mean, but she’s determined. She tries to help him to appreciate life again, they begin to care for one another, etc. The story takes on a more serious tone as he considers ending his life at a assisted suicide facility due to his condition. So, that’s the story, and I won’t ruin the ending for you, but there’s not much else to it.

The book is not badly-written, but it’s not great prose either, it just moves the story along. If you’ve read any chick lit or watched any rom-coms ever, the whole “they-hate-each-other-and-fall-in-love” thing is pretty tired and the way it goes about it is pretty uninspired too.

Still, I think what really bothered me was the fact that Will is so wealthy, successful and handsome, that it prevents the story from being real. Louisa falls for him and tries to help him by planning these elaborate and expensive trips, but that leaves the question in my mind of — what happens if you are paralyzed and not wealthy and good looking? Is your life worthless then? What if you are faced with difficulties and you cannot just throw money at the situation?

If the point of the book was to explore the idea of the value of human life in the face of life-changing disability, then it would have been better off exploring it in the context of more realistic people in real situations. Instead, the author “cheats” in a way by making it the easiest situation ever (e.g. he literally has everything else going for him), and so it is a largely worthless mental exercise to consider it. Without it, all that’s left is a pretty uninspired love story with two uninspired characters. The book focuses a lot on the difficulties of his disability, but its consideration lacked nuance. It made the point that there are a lot of things he cannot do now, but is that really a revelation to anyone? There weren’t any subtleties or surprises for me.

I remember reading a blog post a while back from someone who wrote that a major difficulty that many people living with disabilities encounter is being accused of “faking it. That is, if you don’t have any readily visible signs of your disability, people you meet are unsympathetic and tend to think that you are faking or exaggerating. Alternatively, you might have a visible sign, like being in a wheelchair, but just because you are physically able to stand up straight for a few seconds, it doesn’t mean that you don’t have a disability if it causes you excruciating pain, and those people can be accused of “faking it” as well. It was surprising to me and made me think more deeply about the difficulties of physical disabilities. This book had none of that.

I’d seen Me Before You around a lot — appearing on bestseller lists and in the “Recommended Books” section in a number of bookstores — before finally deciding to pick it up because of the hoard of positive reviews it got on Amazon. I honestly have no clue why anyone liked it. People seemed to find it heartbreaking — the idea that an otherwise perfect man becomes disabled. But while the fact that someone becomes disabled is obviously sad, I think any worthwhile book should delve deeper than that, but this book is doesn’t really present a situation that allows it to really explore what it means to become disabled and the value of life.

Me Before You is frankly insipid and glorifies superficial crap. What’s worse, it parades around as literature because he’s so damaged and angry. Kind of like that hot, angsty guy you meet in high school that’s full of existential bullshit. Skip it. 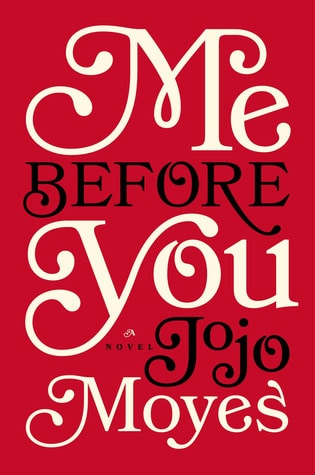 From the Publisher
They had nothing in common until love gave them everything to lose . . . Louisa Clark is an ordinary girl living an exceedingly ordinary life—steady boyfriend, close family—who has never been farther afield than their tiny village. She takes a badly needed job working for ex–Master of the Universe Will Traynor, who is wheelchair bound after an accident. Will has always lived a huge life—big deals, extreme sports, worldwide travel—and now he’s pretty sure he cannot live the way he is. Will is acerbic, moody, bossy—but Lou refuses to treat him with kid gloves, and soon his happiness means more to her than she expected. When she learns that Will has shocking plans of his own, she sets out to show him that life is still worth living. A Love Story for this generation, Me Before You brings to life two people who couldn’t have less in common—a heartbreakingly romantic novel that asks, What do you do when making the person you love happy also means breaking your own heart?
Show More
See it on
Share This
social & email
New Reviews
recent releases
New Posts
recently posted
Discussion and Replies