By Anthony Horowitz, An inventive mystery-within-a-mystery

Magpie Murders, by Anthony Horowitz, offers up a premise that’s almost sure to pique the interest of most lovers of classic mystery novels.

It’s a very Agatha Christie-esque mystery wrapped up in another mystery involving the publication of that manuscript. It’s an especially compelling setup for a mystery novel, since two mysteries means double the intrigue, and the prospect of seeing how the two novels will converge amps up the suspense.

In this nested story, the interior mystery is a traditional mystery modeled after classic Agatha Christie novels. Atticus Pund, a famous detective, is called into a small English village on the behest of a woman whose fiance is a suspect in a murder. And, as is customary in these types of stories, Pund quickly discovers upon arriving at the small village that nearly everyone is a suspect. With his assistant by his side and with the help of the detective assigned to the case, he sets about unraveling the mystery.

This story, of course, is actually an unpublished manuscript written by a well-known mystery author, Arthur Conway. Conway is prickly and difficult, but that’s the least of the concerns from his editor, Susan Ryeland, because Conway ends up being found dead, having fallen — or perhaps having been pushed? — to his death before she finds out how his manuscript even ends. Susan Ryeland, then, sets off to investigate the death of her most popular author.

I have to give credit to Magpie Murders for trying to do something new in a genre that’s known for pumping out nearly indistinguishable novels. I’m glad I gave it a shot. That said, I hate to admit that it’s because of this premise that the book ultimately falls apart.

Anthony Horowitz takes his book-within-a-book conceit quite seriously. Both stories are fully fleshed-out with full casts of characters and sets of suspects, etc. It makes the book rather lengthy, but that’s not an issue, since there’s plenty going on to sustain your interest.

Instead, the problem occurs when you realize as you are nearing the end that you might not get the payoff you were expecting. The whole point of a book-within-a-book should be to see how the two stories converge or relate to one another. Otherwise, what’s the point? But in Magpie Murders, if you separated it out into two books, you actually wouldn’t lose much. And one of those two books is a lot weaker than the other.

To be clear, I really liked the interior Agatha Christie-esque storyline. It is well done in a lot of ways. The mystery, when it’s revealed, is set up nicely and there is a good payoff. The characters are well-developed, interesting and feel authentic. I didn’t love how some of the red herrings unraveled (some things a little too unplausible or coincidental), but the main mystery is solid and it resolves elegantly — in the way that makes you feel like this mystery was worth your time.

Without giving anything away, the book pushes hard at the idea that solving one mystery will help to shed new light on the interior mystery, but in the end, it only does so in an extremely superficial way. It’s hard to explain without revealing the ending (which I definitely would not do in a book review for a mystery novel), but suffice to say that the connections between the two stories are just very disappointing. It’s not that the two stories don’t relate to each other, it’s that it’s not done in a clever or compelling way. And it’s definitely not clever in the way that you’d expect in a mystery novel, especially one that’s supposed to be written by someone who loves hiding clues and puzzles within the text.

What ultimately sealed the fate of this book for me was that the biggest “reveal” of the novel falls flat. There’s no way I would have figured it out simply because the resolution of the central murder in the novel is uninspired and unbelievable. There’s way, way too much coincidence and the motivations that are revealed to be driving this mystery forward don’t make any sense. And yet, despite the weird motivations and whatnot, it somehow also manages to be somewhat guessable just because it seems like an obvious answer.

Anyway, point is, I don’t know what happened. How was this written by the same person? It looks like Horowitz adapted a number of Poirot novels for television earlier in his career, so it’s entirely possible that it gave him a much stronger understanding of how to plot those type of novels as compared to other types of mysteries.

At one point there’s a quick aside about how quiet English villages make for good mysteries, and I have no doubt it’s something that Horowitz understands very well — he explains that tight-knit communities make it easy for characters to intersect and for natural tension to arise. “It’s a gift to the whodunit writer,” his narrator remarks, but it’s clear who is really speaking here. Ultimately, the realm of Christie is where Horowitz shines.

As you may have concluded, I have pretty mixed feelings about this book. As I was reading it, I was engrossed. The payoff for the inner mystery is solid, smart and well-concocted. The outer mystery, though…sigh. It really is kind of uninspired and quite frankly just kind of a mess. Of course, it’s not until you’re nearing the end that you’ll realize it — oh wait, so none of this comes together? oh wait, so that’s not going to get resolved? oh wait, that’s seriously what was going on?

As a lover of Agatha Christie novels, I’m still glad I read this book, but I wish so much the outer mystery had been more thought out. It seems like such a shame since if that had come together in a more coherent and elegant way, this book would have easily become one of those books that people constantly recommend to each other.

Of course, as it stands, it’s still an entertaining book that many will enjoy. If you love classic mysteries, you will probably still like it enough despite its shortcomings for it to be worth it. 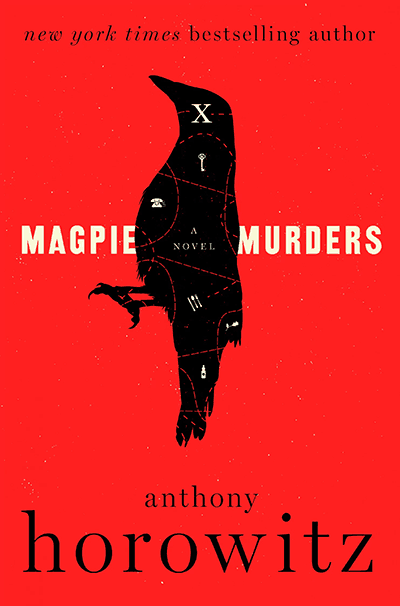 From the Publisher
From the New York Times bestselling author of Moriarty and Trigger Mortis, this fiendishly brilliant, riveting thriller weaves a classic whodunit worthy of Agatha Christie into a chilling, ingeniously original modern-day mystery. When editor Susan Ryeland is given the manuscript of Alan Conway’s latest novel, she has no reason to think it will be much different from any of his others. After working with the bestselling crime writer for years, she’s intimately familiar with his detective, Atticus Pünd, who solves mysteries disturbing sleepy English villages. An homage to queens of classic British crime such as Agatha Christie and Dorothy Sayers, Alan’s traditional formula has proved hugely successful. So successful that Susan must continue to put up with his troubling behavior if she wants to keep her job. Conway’s latest tale has Atticus Pünd investigating a murder at Pye Hall, a local manor house. Yes, there are dead bodies and a host of intriguing suspects, but the more Susan reads, the more she’s convinced that there is another story hidden in the pages of the manuscript: one of real-life jealousy, greed, ruthless ambition, and murder. Masterful, clever, and relentlessly suspenseful, Magpie Murders is a deviously dark take on vintage English crime fiction in which the reader becomes the detective.
Show More
See it on Amazon
Share This
social & email
New Reviews
recent releases
New Posts
recently posted
Discussion and Replies