The Love Affairs of Nathaniel P.

By Adelle Waldman, A Portrait of the Type of Guy Most Post-College, Pre-Marriage Women Know Very Well

I have a male friend who I would describe as the following: Great co-worker, okay friend, mediocre boyfriend, and a flat out raging asshole as far as anything short term or hookups are concerned (seriously, run don’t walk). The Love Affairs of Nathaniel P. is about that guy that most post-college, pre-marriage women know well — you’re friends with versions of him, you’ve probably dated versions of him and there’s versions of him who you actively avoid. It all depends on the context of where and when you meet or know this guy. I know that particular prototypical Nathaniel P. described above in a work context so I like him just fine, though I try to encourage him to be kinder. (To anyone who’s read the book, I guess that makes me some version of Aurit.)

The back of the book describes him as the “modern” man, but it’s really not. This is a very specific type of guy. I know plenty of well-adjusted, intelligent, mature young men, and I don’t consider them to be anachronisms or even rarities. Instead, I think he’s a modernized version of a certain type of guy — he’s well-educated and socially aware, and as he finds professional success he also does better with women; he’s convinced he’s basically a good guy, but there’s a very immature and selfish part of him, shaped to some extent by the current mores, that can result in him being downright callous, self-serving and manipulative in his interpersonal relationships.

Adelle Waldman attempts in The Love Affairs of Nathaniel P. to get inside this guy’s head, poke around a little, and paint a picture of him, answering the ever-familiar question of “what the hell was he thinking??” I think she’s somewhat successful at this, though some parts were less convincing than others. The internal monologues should have been shortened probably. I suspect Waldman was trying to use them as a way of putting in background information, but in that case they should have been written as third-person omniscient background information and not internal monologues because that’s when the voice of Nate sounded the least convincing. And they were still a little too much.

I think I have a hard time liking this book outright though because it seems almost too cynical, to the extent that it feels like it has the effect of letting these types of guys off the hook. The attitude almost feels like “well, that’s just how he thinks” so too bad. I wish there would have been an sort of healthier, more well-adjusted guy as a sub-character to serve as a foil. The book basically just says, well, this kind of guy is an asshole, he just can’t admit it. His behavior causes conflicts, and then he tells himself that women are nuts. And he justifies his actions by condescending the women he dates in his mind or pushing it out of his head.

For example, at one point Nate feels a little guilty, but ameliorates his guilt by thinking about the world at large (the famine, the wars, etc.) to justify his own shitty behavior — “in such a context, the small-scale romantic disappointments of privileged single women in New York City did not even remotely make the cut.” I sort of wish there was a character there to make the flip side to that argument, which is basically that being shitty is still being shitty, it doesn’t matter if there’s people out there committing genocide, you’re still an asshole.

I will say that this book does tell women one important thing which I’ve always thought, which is that this type of guy, deep down, knows he’s kind of an asshole to you, even if he doesn’t think it makes him a bad person, and even if he gets angry when he gets called out on it. And if you put up with it, he’ll like you less and not more. At Hannah tries to resuscitate her relationship with Nate, his condescension grows considerably.

The book also posits an answer the question: what type of person does he end up with? In the end, Nate is in a relationship that just might work out. She’s attractive. She’s smart, but not challenging. She’s critical at times, but not in a way that makes him feel like he has to change. She talks about things like feminism, but is actually quite traditional in her sensibilities. And she’ll never quite get him and in truth he even looks down on her in some ways, but he actually prefers it that way.

I’m glad Waldman still gave Nate a psudeo-happy ending, mostly because, let’s face it — these guys to tend to still end up with someone — but down the road it’ll just be another one of many, many, many not quite fulfilling, unhappy, conditional marriages.

I thought it was just an okay book in terms of literary value, etc., so if the topic’s not relevant to you, you probably won’t find it all that great or even interesting. But if you’ve dated a guy like this or know a guy like this or you just like psychoanalyzing people, you might want to give it a shot. Even with the caveats, I will still probably recommend it to a couple friends. 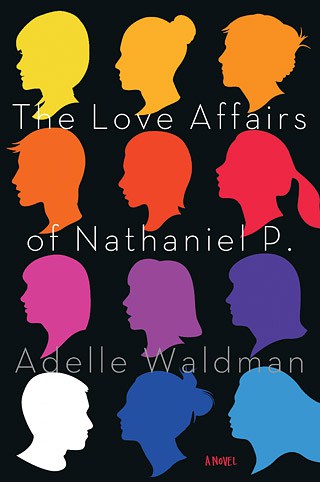 From the Publisher
In this sharply written first novel, Waldman homes in on a self-absorbed writer living in New York City. Nate Piven is still basking in the glow of having sold his first book after years of struggling to support himself with freelance work. His newfound success has given his love life a boost, and a number of women are pursuing him, including his beautiful ­ex-girlfriend Elisa and brainy Hannah, also a writer. As Hannah and Nate’s relationship gets more serious, Nate is quick to blame any communication snafus on Hannah, whose calm and self-­confidence begin to evaporate. Although Nate thinks of himself as enlightened, a product of a postfeminist, 1980s childhood and a politically correct, 1990s college education, his actions continually belie that self-image. Nate is constantly jockeying for status among his friends and critiquing women’s bodies, clothes, and looks even as he tries to figure out why his relationships never last. The novel is most likely to appeal to twentysomethings, who will no doubt recognize the preening male so thoroughly skewered here, but older readers may be put off by such an unlikable lead character.
Show More
See it on
Share This
social & email
New Reviews
recent releases
New Posts
recently posted
Discussion and Replies