Main / Books / A Long Way Down

A Long Way Down

By Nick Hornby, A Humorous Book Touching Upon Some Big Questions

Nick Hornby’s newest novel A Long Way Down, opens on New Year’s Eve at Topper’s House, a 15-story London apartment complex. With the sounds of partiers clinking champagne glasses below, four strangers sneak onto the rooftop to end their lives. With the premise set – four strangers just so happening to want to try jumping off the same roof at the same time – the plot unfolds from the sheer force of its distinctive characters.

There’s Martin, an infamous television personality estranged from his family; Maureen, a devout Catholic who has spent almost two decades caring for her disabled son; Jess, the token angst-ridden teenager; and JJ, a failed wanna-be rock star. With this crew, it’s going to be a not-so-happy New Year’s. Four’s a crowd when it comes to suicide, and no one manages to get much leaping done with the others lining up to take their turn. So, instead, these strangers form an unlikely band of suicidal loners.

Together they face the dismal prospect of living out the final weeks and months of the rest of their lives. In A Long Way Down, Hornby somehow manages to make suicide funny. Except for a few tasteless passages and an occasional awkward turn of the plot, A Long Way Down addresses some of the Big Questions without losing its sense of humor. 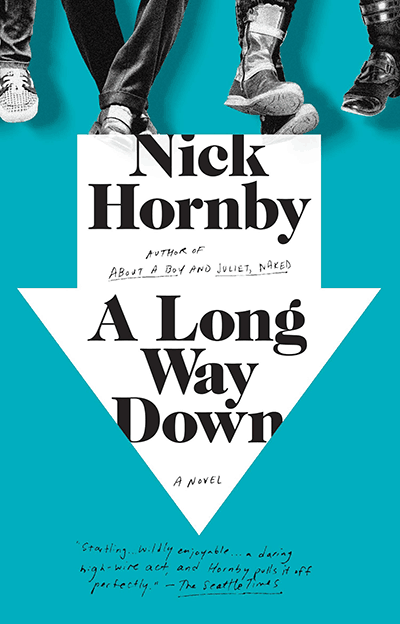 From the Publisher
A wise, affecting novel from the beloved, award-winning author of Funny Girl, High Fidelity, and About A Boy.
Nick Hornby mines the hearts and psyches of four lost souls who connect just when they’ve reached the end of the line.
In four distinct and riveting first-person voices, Hornby tells a story of four individuals confronting the limits of choice, circumstance, and their own mortality. This is a tale of connections made and missed, punishing regrets, and the grace of second chances.
Show More
See it on
Share This
social & email
New Reviews
recent releases
New Posts
recently posted
Discussion and Replies