Main / Books / In the Woods

By Tana French, A Substantial and Engaging Thriller

It’s 1984 and three twelve-year-olds, best friends who live in Knocknaree, Ireland, are playing in the woods. By nightfall, two of them are missing and the last boy, Adam Ryan, is found, traumatized, in a tree with a sneaker filled with blood, gashes in his clothes and gaping holes where memories of that day’s events should be. Despite intensive investigation and media scrutiny, the case is never solved. Years later, the boy is now a homicide detective in Dublin, and a case from Knocknaree comes across his desk. A child’s body has been found in those same woods. As Detective Ryan proceeds to investigate, he is desperate to bring this killer to justice and perhaps to figure out what happened that day in 1984.

Every once in a while I get the itch for a good mystery, and this book had been politely collecting dust on my shelf for quite a while now. Into the Woods won an Edgar award when it came out, but it was Tana French’s debut novel (and those are generally a little hit and miss) and mystery thrillers tend to be good at plot but not much else, so I was pretty content to let it sit there for a while. Turns out, I did not give this book enough credit — it is definitely a police procedural and mystery, but it’s more than that, too; it’s a character-driven psychological thriller and a complete story, one about a damaged person, still lost in the woods.

French’s novel is compelling, well-paced, and genuinely suspenseful at times. Ryan is the narrator and he is all at once intriguing and frustrating as the sole eye-witness to the 1984 crime, as one of the primary investigators of the new crime and as someone who is unraveling piece by piece as the case drags on.

The book gets somewhat mediocre reviews across the board, presumably because the end is not as tidy as people seem to like. In the book’s defense, there is, however, definitely an ending. And, with regards to the questions that remain — honestly, would it make a difference? In the end, Ryan is sadly and irrevocably trapped by the events of his childhood. I think even though there are some unanswered questions, it’s pretty clear what Ryan’s story is going to, even if it’s not the answer he or we are hoping for.

It’s not a perfect book — I wasn’t as shocked by the real villain’s identity as the novel seemed to think the reader would be; it spends a little too much time trying to explain and reiterate Ryan and Cassie’s relationship (I GET IT, THEY’RE CLOSE. MOVE ON.) But neither of these things really detracted much from my enjoyment of the book. Ehhh…maybe a little, but I found it forgivable. The writing is almost all quite good, though a few parts are rough around the edges. The worst offenses were probably the “I lie” and the “it fooled you, too, right?” parts. It became a borderline cheesy mystery novel for a few moments, but quickly backed away. As it stands, it’s still a well-written and smartly constructed novel.

If you like mysteries (generally very plot driven) as well as more character-driven books, you should check this one out. Reading this flew by for me. Enjoyed it, flaws and all. 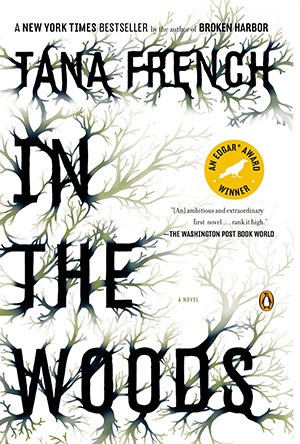 From the Publisher
As dusk approaches a small Dublin suburb in the summer of 1984, mothers begin to call their children home. But on this warm evening, three children do not return from the dark and silent woods. When the police arrive, they find only one of the children gripping a tree trunk in terror, wearing blood-filled sneakers, and unable to recall a single detail of the previous hours. Twenty years later, the found boy, Rob Ryan, is a detective on the Dublin Murder Squad and keeps his past a secret. But when a twelve-year-old girl is found murdered in the same woods, he and Detective Cassie Maddox—his partner and closest friend—find themselves investigating a case chillingly similar to the previous unsolved mystery. Now, with only snippets of long-buried memories to guide him, Ryan has the chance to uncover both the mystery of the case before him and that of his own shadowy past. Richly atmospheric, stunning in its complexity, and utterly convincing and surprising to the end, In the Woods is sure to enthrall fans of Mystic River and The Lovely Bones. And look for French's new mystery, Broken Harbor, for more of the Dublin Murder Squad.
Show More
See it on
Share This
social & email
New Reviews
recent releases
New Posts
recently posted
Discussion and Replies