Book review and synopsis for In Five Years by Rebecca Serle, a tear-jerker but not a romantic chick lit novel.

In Five Years is about a successful and recently engaged woman, Dannie, who sees a vision of herself five years into the future. In that vision, she's engaged and in love with a man she's never met and living in an apartment she doesn't recognize. It appears to be a completely different life than the one she's currently living.

When she wakes up, life is back to normal, and she tries to write it off as a strangely vivid dream. Then, four and a half years later, she is introduced to the man from her dream.

Dannie Kohan is a successful corporate lawyer living in Manhattan in December 15, 2020. Her lifelong best friend, Bella, wishes her luck for her interview at a very prestigious firm. Dannie aces it. Afterwards, her investment banker boyfriend David takes her out to celebrate and proposes.

That night, Dannie dreams of a vision of herself five years in the future, December 15, 2025. She's in a Brooklyn apartment she doesn't recognize and she's engaged to a man, Aaron, she's never met before. She feels something overwhelming towards him, and Dannie realizes that she loves this man. They have sex.

When she wakes, Dannie is back in 2020. Dannie starts her new job. Life goes on, though the dream hangs in her mind. By June 2025, David is now working at a hedge fund, Dannie will be up for partnership soon at the firm and Bella now owns a gallery. However, David and Dannie are still unmarried. And when Bella introduces Dannie to her new flame, Dannie recognizes that it is Aaron from her dream. Moreover, when Aaron shows Dannie the Brooklyn loft apartment he and Bella are considering buying, Dannie recognizes it as the one from her dream -- albeit in need of renovation.

Afraid to let her dream come true, Dannie tells David that she's ready to get married. They decide on December for their wedding and start planning. Meanwhile, Bella and Aaron are getting serious. At the beach one day, Dannie and Aaron share a moment, but then Bella soon finds out she's pregnant. Aaron is delighted.

However, Bella goes to the doctor and it turns out to be ovarian cancer, which can cause false positives in pregnancy tests. Dannie is heartbroken for her friend, who she loves deeply. Bella's parents are very wealthy and provide for her financially, but were never there for Bella. Instead, she relied on Dannie and Dannie's family.

As Bella goes through surgery and starts chemo, both Dannie and Aaron are there for her. Things look promising. But when Bella ends up buying the Brooklyn loft, Dannie begs her to not live there and tells her to sell it off, trying to avoid her vision becoming reality. Bella and Dannie get into an argument over Dannie's over-protectiveness, but when Bella received bad test results, they make up.

Bella and Aaron get engaged. Afterwards, Bella warns Dannie that maybe David isn't the guy for her. When Dannie suggests postponing the wedding, David gets irate and soon calls it off. Dannie moves in with Bella, though she is increasingly weak from chemo. In early December, Aaron surprises Dannie with the Brooklyn loft that he and Bella have renovated so she can live in. It looks exactly as it had in Dannie's dream. As she and Aaron stand there, they end up kissing, but he quickly pulls away and leaves.

Bella's health deteriorates quickly. When Bella tells Dannie that she's sad that Dannie has never known real love and heartbreak, Dannie thinks of Bella and her dying and Dannie knows that isn't true. Dannie also encourages Bella's mother, Jill, to be there for her. Bella passes away a few days later with her mother at her side. The funeral is on December 15, 2025. Afterwards, Dannie and Aaron go back to her new apartment, and the scene from her vision plays out exactly. Dannie realizes that the overwhelming feeling she had felt in her dream was not love at all, but grief. They hug and he leaves.

Afterwards, Dannie goes to the deli nearby and runs into Bella's surgeon and doctor, Dr. Mark Shaw, who she has gotten to know. Dannie notices how handsome he is. He walks her home and he he asks if he can see her sometime when she's ready, and Dannie thinks that she will perhaps say yes.

I’ve been seeing In Five Years by Rebecca Serle around for a while, though perhaps partially a result of an aggressive marketing campaign. But since I’ve been on a continuous search for lighter reads and it reminded me of a movie I like, I thought this one would fit the bill.

What it turned out to be isn’t quite what’s advertised. It’s definitely chick lit and the storyline is intended to be emotional and moving, but it’s not, like, an upbeat romance if that’s what you’re looking for.

When I first heard about the plot of In Five Years, I thought it was going to be something similar to The Family Man, which is a movie I’ve always liked. It’s a Nicholas Cage movie where a Wall Street executive gets a glimpse of another life he could be living. It leads to rediscovering an old flame and it challenges his perception and values. It’s lighthearted, fun and a little romantic.

In Five Years, goes in a different direction. I don’t want to give anything away, but if you’re hoping for some romance and internal reflection, this is not that. Dannie is prestige-obsessed and clearly an elitist. When the book ends, she’s still basically the same person.

In general, the main cast of characters are all very standard, nondescript upscale rom-com caricatures. The hot hedge fund guy. The cold corporate lawyer woman. The wealthy heiress who owns an art gallery. The blond Adonis architect. They love brunch, small wine bars, walking on the High Line, good sex, fancy restaurants and live in fully renovated, modern apartments. So the beginning is mostly sort of superficial and devoid of personality. If you told me a Restoration Hardware catalog became sentient and tried to write a book, it would be something like that.

In the second half, there’s a soapy plot turn and there’s an element of cleverness in the way it plays out in the end. I would argue that it doesn’t really stand up to scrutiny, but the ending will tug at your heartstrings regardless. The second half of the book gets better, as the book’s focus shifts from one-dimensional characters going fancy things to actual plot progression.

The writing in the book is not bad, the pacing is good and the story does work in the end. It’s just kind of a cheap and overused plot twist, so it’s hard for me to be enthusiastic about it.

As a sidenote that only a small number of people will care about, Serle offers very detailed and yet very inaccurate descriptions of the life of a biglaw corporate lawyer, which drove me up the wall. You can’t do an IPO in a month! Corporate lawyers don’t refer to their matters as “cases”! And law firms don’t run legal departments for corporations. Those are just the tip of the iceberg. The most realistic part is when Dannie says that the probability of her running into a random person in a city of nine million is “less than zero.” (Hint: it’s not.) And I thought, yup, she’s a lawyer, alright. Terrible at math.

Megan Hilty does a great job narrating this book. If you’re interested in reading this, definitely consider the audiobook.

Meh. If you’re looking for a quick chick lit read, this book doesn’t quite fit that description, though it sort of does. There’s not a lot of romance and I wouldn’t describe it as fun, funny or even lighthearted. It is, however, a tear-jerker if that’s what you’re looking for. And there is certainly no shortage of descriptions of upscale restaurants, posh apartments and well-known New York City locations, if you’re into that sort of thing. Native New Yorkers may find it a bit eye-roll inducing, but if you’ve visited Manhattan as a tourist, you may enjoy coming across something you recognize.

I think if you read this book uncritically, you will probably be fine with it, since the writing is fine and the pacing is good. It’s also a nice quick read with some cleverness to the plot. I found the ending to be sort of cheap, and I was disappointed by how little introspection or self-reflection is in the book. It’s mostly beautiful characters off to do the most obvious fancy things like weekends in the Hamptons and then kind of a soapy plot twist.

See In Five Years on Amazon.

Spoilers and Explanation start here! Don’t read beyond this point if you haven’t read the book! Keep reading if you’ve read the book, but have questions!

Where can I find a full plot summary of In Five Years?

Help! I’m confused. What’s happens at the end of In Five Years?

Basically, that Dannie’s vision comes true and plays out pretty much exactly as she had seen it, though some of the initial assumptions she had made during the vision were incorrect. For example, the ring she was wearing was Bella’s and not hers. And more importantly, she isn’t in love with Aaron. They were just hooking up over their shared grief. In her vision she’d felt overpowered by her emotions which she assumed meant that she was in love with him, but instead she was simply overwhelmed by her grief.

After the hookup, it’s implied that she and Aaron will stay in touch but most likely just as friends. Instead, she sees Dr. Shaw (Bella’s surgeon) at the nearby deli, he walks her home and the book indicates that he will ask her out and she will (perhaps) say yes.

Have more questions? Ask in the comments and if it’s a common question, I’ll post it here.

Read the first pages of In Five Years 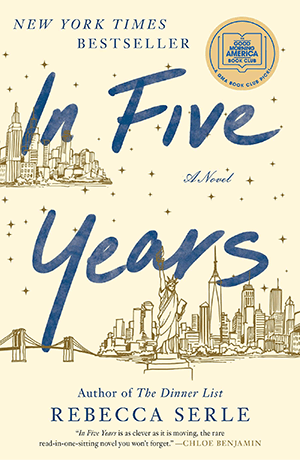 From the Publisher
She is nothing like her lifelong best friend—the wild, whimsical, believes-in-fate Bella. Her meticulous planning seems to have paid off after she nails the most important job interview of her career and accepts her boyfriend’s marriage proposal in one fell swoop, falling asleep completely content. But when she awakens, she’s suddenly in a different apartment, with a different ring on her finger, and beside a very different man. Dannie spends one hour exactly five years in the future before she wakes again in her own home on the brink of midnight—but it is one hour she cannot shake. In Five Years is an unforgettable love story, but it is not the one you’re expecting.
Show More
Read an Excerpt
See it on Amazon
Share This
social & email
New Reviews
recent releases
New Posts
recently posted
Discussion and Replies