Good Omens: the Amazon TV Series vs the Book 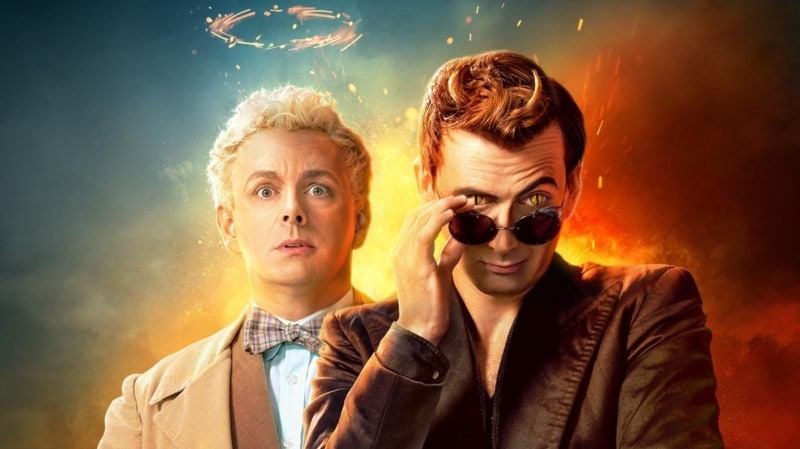 Aziraphale and Crowley in the Amazon adaptation

The Good Omens adaptation was released on Amazon on May 31st, and if you’re a fan of the book like I am, you’re probably pretty keen to see it.

If you don’t know about the book, Good Omens: The Nice And Accurate Prophesies of Agnes Nutter, Witch by Neil Gaiman and Terry Pratchett, it’s a great time to get acquainted. You can also read my review and summary of Good Omens. It’s a fantastic book, especially if you like funny, apocalyptic novels, and worth consuming in whatever form you can.

Of course, this post is about the film adaptation that just came out. Is it good? Is it faithful to the book? How does it compare?

The series is six episodes long, each running about an hour. All episodes are available on Amazon Prime Video.

The show stars a bunch of recognizable British actors, notably Michael Sheen and David Tennant as the angel Aziraphale and demon Crowley. John Hamm also appears as the angel Gabriel, and Frances McDormand voices the role of God. (Benedict Cumberbach can also very briefly be heard in the last episode as the voice of Satan).

If you aren’t familiar with the story, basically, the birth of the Antichrist means that the end of times is nigh, so an angel and demon who have been happily living on earth decide they need to try to prevent the apocalypse. It’s an apocalyptic comedy, which is very funny but also addresses its subject matter thoughtfully and effectively. 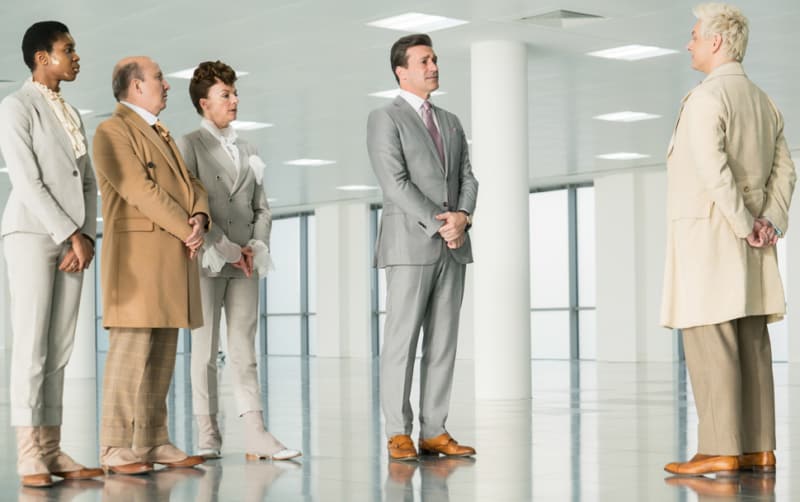 The short version of this review is that the adaptation pretty good.

Fans of the book, I think, will be the ones who are most pleased with it. The adaptation stays largely faithful to the book, and a lot of the lines come verbatim from the book.

But it can definitely be enjoyed by people who aren’t familiar with the book, assuming you like sort of zany, fantastical humor. Also, if you found the book premise interesting, but thought the book was confusing, then the show will probably be a win for you, since the show has streamlined or clarified aspects of the story (see below for the comparison).

To the extent things are changed or added, they generally don’t change the overarching meaning of things. This is unsurprising, since Neil Gaiman served as a showrunner for the series (showrunners are the guys who are there every day, calling the shots), so it was unlikely he’d let it just be butchered when it came to the adaptation.

The production values are relatively high, though you can tell there were a few parts they had difficulty adapting. For example, most of Episode 5 felt awkward to me, and I think it worked better in the book. In the story it’s when stuff starts to really go haywire (which means lots of special effects), so I imagine some of this is due to budget constraints.

They’ve also added a few things that are unique to the show, like a montage of Crowley and Aziraphale’s relationship through the years, which work really well. The relationship is explained via narration in the book, but seeing them in different time periods and how their relationship develops is fun, especially if you’re already a fan of the book. 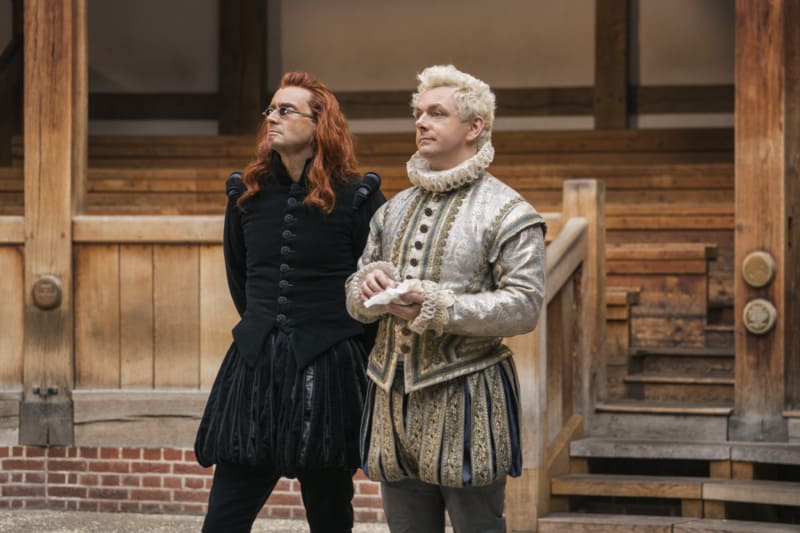 Aziraphale and Crowley at the Globe Theater

There’s a few parts in the show that have been changed that make parts of the plot easier to follow as compared to the books. For example, there’s a baby-switching scene that is (arguably) pretty confusing in the book, and that scene has been lengthened considerably, plus the visual aid makes it a lot easier to understand what is going on.

Other parts have been rearranged or have more narration to provide more clarity about what’s happening, such as the introduction of the Four Horsemen. I preferred the way it’s done in the book where you don’t entirely realize they are the four horsemen until close to the end. However, I’m guessing people found it confusing, so in the show they state very clearly up front in huge letters exactly who these characters are and hammer the point home with additional narration.

The show also adds in some clarifications about things that were left ambiguous in the book. For example, in the book there’s a critical moment where some machinery is messed with and you know that something bad has happened but it’s a little unclear what exactly was going on. In the show, they’re much more explicit.

Finally, towards the end there start to be some changes in the ending, but I won’t give that away, since you should see it (or read it!) for yourself. There’s been more added to the ending, but the meaning is largely the same. There’s also a fun twist involving Aziraphale and Crowley at the end that’s worth seeing.

Watch it or Skip it?

If you like apocalyptic comedy, watch it! My recommendation is to read the book, then watch the show. It’s good enough to enjoy twice, and the show adds some stuff so it’s worth taking a look at even if you’re already familiar with the story.

You can also read my summary and review of Good Omens (the book). Also, I don’t know who designed the poster below, but I hope someone gives them a raise because it’s fantastic.

Have you watched this or will you be watching?