The Final Solution, by Michael Chabon (who won a Pulitzer in 2001 for The Amazing Adventures of Kavalier & Clay), is like Encyclopedia Brown on crack. A novelette – it’s a brisk 144 pages – starring a famous unnamed detective (the book hints at his identity being Sherlock Holmes), The Final Solution is a story of one case, one murder, one answer, and one boy and his parrot.

Like Encyclopedia Brown who runs his business (remember? NO case too small, 25 cents per day) from his garage, the detective gets asked by city investigators to assist in a case involving a murder and a stolen parrot – a bird with a curious habit of rattling off streams of seemingly insignificant numbers. Set at end of World War II in England, our retired detective reluctantly sets off to help a mute Jewish boy find his pet.

It’s a whodunit (was it the jealous husband? the irascible son? the stranger?) mixed in with a bit of military and political intrigue that has all the elements of a solid mystery novel. Though it’s a bit longer than Encyclopedia’s average case, Chabon’s novel still retains the gratifying “reveal” at the end of the book that makes it all worth the while. Short, sweet, and altogether satisfying. 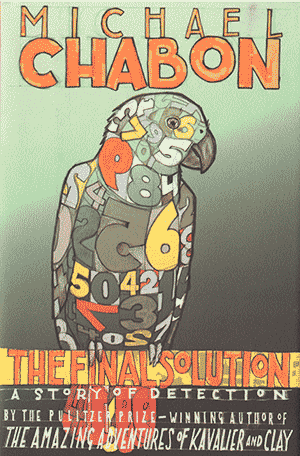 From the Publisher
In deep retirement in the English countryside, an 89-year old man, vaguely recollected by the locals as a once-famous detective, is more concerned with his bookkeeping than his fellow man. Into his life wanders Linus Steinman, nine years old and mute, who has escaped from Nazi Germany with his sole companion: an African grey parrot. What is the meaning of the mysterious strings of German numbers the bird spews out-a top-secret SS code? The keys to a series of Swiss bank accounts? Or do they hold a significance at once more prosaic and far more sinister? Though the solution to this last case may be beyond even the reach of the once famed sleuth, the true story of the boy and his parrot is subtly revealed to the reader in a wrenching resolution to this brilliant homage. The Final Solution is a work from a master story-teller at the height of his powers.
Show More
See it on
Share This
social & email
New Reviews
recent releases
New Posts
recently posted
Discussion and Replies