By Kevin Kwan, A Nuanced but Lengthy Comedy of Manners About Crazy Rich Asians

Crazy Rich Asians by Kevin Kwan details the exploits of a not just rich or filthy rich, but crazy rich* Chinese family when the a member of the family’s girlfriend, Rachel Chu, a smart Chinese-American girl from Cupertino, comes to meet the family in Singapore.

I actively avoided reading this when it came out, expecting that it would be one of two things: either an over glamorization of materialism (a la omg look how awesome their lives are, like some sort of Asian Gossip Girls) or it would be a humdrum caustic, biting takedown (a la omg these people are so awful, blah, blah, blah). But my book club chose it, and it turns out I was wrong (I hate being wrong. Ugh).

Kwan’s novel has more nuance than the title would suggest — sure, there’s (lots of) displays of exorbitant showboating, but he also lays out a myriad of characters that handle their background and how they act when they come across “outsiders” in varying ways. Crazy Rich Asian reads much more like a Chinese-Singaporean Jane Austen novel. The families are a complicated web and the really interesting parts of the novel are not so much in the oohing-and-ahhing about their luxurious lives (though there’s plenty of that in there), but rather in seeing how they interact with one another (or behind each others’ backs), since not all Crazy Rich Asians are equal, not even to each other.

The novel also depicts a very wide swath of the many varying attitudes that Chinese people have about one another, the American-Born-Chinese, versus the Mainland Chinese, versus the Taiwanese Chinese, versus the Singaporean Chinese, versus old money and new money, versus all the various gradations of social dominance, and the list goes on and on and on. A little outside research revealed that Kwan was apparently born in Singapore into a family similar to or at least adjacent to the one he describes, which explains his thorough descriptions and the copious amount of random cultural information in the book as well.

From a literary perspective, I’ll say I found him to be a okay writer. The book is a little lengthy, clocking in at over 500 pages, but not a difficult read. It started to drag about half way through, I imagine some parts could have been cut or shortened without losing much substance since the showboating gets old and you sort of just want the plot to move on already. I finished it in a day, but it was a slog for a while and picks up at the very end.

I reviewed this book a while ago, but since then this has been adapted into a fabulous movie by director John M Chu. They’ve modified the ending slightly, but I’m not going to spoil it for you here. There’s a fantastic mah jongg scene that’s specific to the movie. After you watch it, read this analysis of it since there’s a lot of subtlety in that scene. I also love the soundtrack, especially the rendition of Yellow by Coldplay in Chinese.

Overall, Crazy Rich Asian was a decently enjoyable read for me, and I feel a little bad now for dismissing it out-of-hand when I first came across it (ha! no way am I reading that, was literally my first thought). I don’t know if I would recommend it to everyone, but it’s the sort of thing I wish they would read, just because I think people need reminders sometime about Asian people or even Chinese people are no where close to being a homogeneous bloc. But that’s wishful thinking. However, if you’re a Jane Austen fan, interested in how crazy rich Asians live, or you just like comedies of manners-type stuff, consider giving this a shot. If you’re an Asian girl who likes to read, you might enjoy it too — his description of how Asian dudes size up Asian girls and why Asian girls sometime avoid them is spot on and pretty funny.

*I paraphrased this from the front cover, btw. 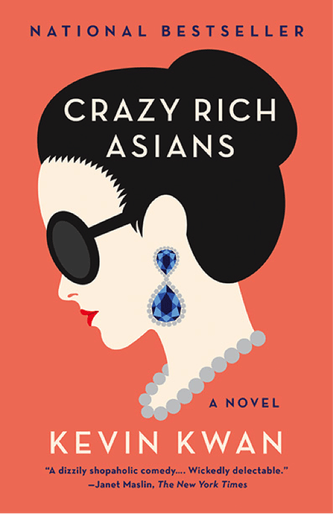 From the Publisher
When New Yorker Rachel Chu agrees to spend the summer in Singapore with her boyfriend, Nicholas Young, she envisions a humble family home and quality time with the man she hopes to marry. But Nick has failed to give his girlfriend a few key details. One, that his childhood home looks like a palace; two, that he grew up riding in more private planes than cars; and three, that he just happens to be the country’s most eligible bachelor. On Nick’s arm, Rachel may as well have a target on her back the second she steps off the plane, and soon, her relaxed vacation turns into an obstacle course of old money, new money, nosy relatives, and scheming social climbers.
Show More
See it on
Share This
social & email
New Reviews
recent releases
New Posts
recently posted
Discussion and Replies